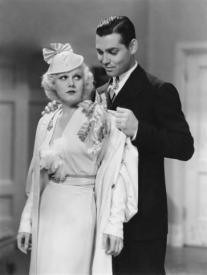 Jean Harlow and Clark Gable in Hold Your Man.

I ask you, does it get any better than Jean Harlow and Clark Gable in an Anita Loos written film from the early 1930s?  Okay, so this, the 3rd of 6 pairings of Harlow and Gable, isn't the greatest movie for either of them and it does suffer from a sudden mood change half-way through, but it's still a great showcase for two of the greatest stars of the time.

The movie starts as a romantic comedy.  Gable is con artist Eddie Hall.  One day while on the run from the cops he ducks into a random apartment whose door happens to be unlocked.  In the bathroom of this apartment is Ruby Adams (Harlow) who happens to be taking a bubble bath.  The sparks fly between the two of them almost instantly.

Ruby's not a hooker, but she is a fun time girl who gets by on the kindness of strangers (all male). Like most of Harlow's classic characters, she's blonde and brassy but with a heart of gold.  She's soon in love with Eddie and is helping him with his con scams.  First she has to get rid of Eddie's current girlfriend, Gypsy, which she does with a quick sock to the jaw.

Because this movie was released prior to the Hays Code being strictly enforced, Eddie and Ruby are allowed to have sex.  They're also shown to be having a good time making their living on the wrong side of the law.  This first half of the movie is the most fun and light hearted.

The second half shifts gears sharply. As a sign of things to come under the soon to be enforced Code, Eddie and Ruby are shown being punished for their crimes and are forced to redeem themselves.  When Eddie accidently kills a man during one of their schemes, he goes into hiding, while Ruby is arrested and sent into a reformatory.  We also learn that Ruby is pregnant.  But will Gable do the honorable thing and come forward to marry the woman he loves?

While the story starts from Gable's point of view, this last half of the movie shows why Harlow got top billing.  Eddie disappears for a long stretch while Ruby is in the reformatory.  Although this part is a bit melodramatic, there are still some great moments of comic relief.  Ruby runs into Gypsy, who's also in the reformatory, and they spar and fight again.  The other inmates also have distinctive personalities and provide some laughs.  There's the slutty preacher's daughter (who seems to be in jail simply because she slept around) and the socialist who keeps going on and on about worker's rights and the coming revolution.

Some of the best dialogue takes place between the women.  "Just two weeks ago, he (Eddie) sent me ten bucks for Christmas. I bet that's a bit of news to a certain somebody." Gypsy says loudly so Ruby will overhear. To which Ruby replies, "He was tossin' ten-dollar bills to ALL the tramps at Christmas!" "Did you get yours?" Gypsy snaps back.

Harlow even sings a song at one point.  Although actually calling it singing is a bit kind since she really speaks the lyrics rather than sings them.  As Harlow said at the time, "They have me singing in a reformatory! My singing would be enough to get me in, but I'd never be able to sing my way out."

Gable and Harlow were the perfect onscreen couple.  She was no lady and he was no gentlemen and they shared a great chemistry. When they're backed by the sharp witted pen of Anita Loos, they make movie magic, even in this unevenly plotted film. 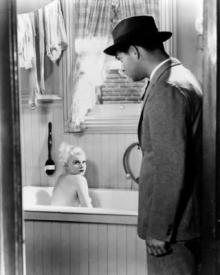 Jean Harlow (with Clark Gable) knows how to Hold Your Man.

Although she played opposite many great leading men, including James Cagney, Cary Grant, Spencer Tracy, William Powell, and Robert Taylor, in her brief movie career, Jean Harlow shared her greatest screen chemistry with Clark Gable. As Scott mentioned, they made six pictures together beginning with a little remembered movie called The Secret Six in 1931 in which Gable played a supporting role. Their sixth movie together was Harlow's final picture, 1937's Saratoga, which was released a month after her untimely death at the tragically young age of 26.

Hold Your Man is the least celebrated of the five movies they starred in together. It really is like two movies stuck together. The first half is breezy fun with Gable's Eddie Hall verbally sparring while romantically sparking with Harlow's Ruby Adams. From the moment he walks in on her in that bubble bath (see photo) you just know they were meant to be together.

The second half becomes a morality play. Once Ruby enters that girl's reformatory the tone shifts so jarringly you almost feel you're watching a different picture all together. Not that this half is bad. As Scott wrote, the other girls she meets are a colorful, entertaining bunch. The drama is handled well and the ending is quite romantic. But it's just so serious compared to the lightweight mood of the first half.

The script spends the rest of the movie doing penance for the nonchalant manner in which Ruby first sleeps with Eddie.

Gable and Harlow's personalities complimented each others. They were both street smart and stylish and neither suffered fools gladly. Physically they looked sexy as hell together. Both could rattle off insults in the latest street vernacular but underneath each exhibited a decent soul. Everyone wanted to be their friend as they always seemed to be having such fun. Where ever they went they took the party with them. I agree Scott, they were the perfect onscreen couple.

During their first three movies together Harlow was the bigger star as her larger role in this movie attests. By the time they made China Seas together just two years later Gable had grown his famous mustache, won an Oscar and become the undisputed King of Hollywood.

Harlow's catfight with Dorothy Burgess is funny. Gypsy slaps Ruby and Ruby punches her with a left hook in return. And during their argument Harlow gets this memorable zinger, “You wouldn't be a bad looking dame, if it wasn't for your face.” Ouch!

Scott's right, Hold Your Man, with it's uneven tone, is far from Gable and Harlow's best picture together (and it certainly isn't the best screenplay Anita Loos would write either for that matter). But it does contain a few sparkling scenes and both stars give winning performances. It's well worth watching for the magic they create together. 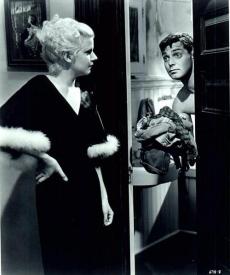 Jean Harlow and Clark Gable in Hold Your Man

Hold Your Man is a story of morality but the lesson is a bit muddled. Ruby and Eddie both live off other people by means of conning money out of them. The script never comes out and actually names Ruby as a hooker, but she is a mere single step away. She dates men and does whatever she needs to in order to get money from them, be it a lie about a lost purse or sex. The film never shows her exchanging sex for cash but an early scene spells it out when Eddie notices her towel is from a hotel and she smirks, "I've been around." She then hands him a robe, and Eddie notes, "A man's bathrobe?" On second thought, she is a whore, she just hasn't brought herself to admit it.

The scene at the restaurant is my favorite. Ruby is on a date with Al, a man with some money who wants her to marry him and move away. She only sees him as a meal ticket. She lights up when Eddie walks in. Clearly she is attracted to Eddie in ways that have nothing to do with money. Eddie ends up sitting at their table and cons her date out of some many as well. Ruby and Eddie are as alike as they can be.

As both my brothers wrote, the first part of the film is the best. It showcases both of the lead's charms to great affect. Harlow demonstrates her sassy street smarts, but she is only human and succumbs to Gable's seduction. Listen to how she says this line as Gable moves in for the kill, "I could dance with you all day and it wouldn't mean a thing." For his part, Gable is a self assured cocky small time crook. Harlow mentions his smile at one point and I never realized before just how much acting Gable did with it. My favorite bit of his is when he smiles and salutes a pillow with a provocative phrase sewn on it. Patrick is correct. Jean Harlow and Clark Gable had amazing chemistry together.

The script is not as good as the stars. Ruby goes to a reformatory full of loose women. One of the funniest moments is when two girls correct the sewing instructor that a sailor's shirt has a drawstring and not elastic at the bottom. wink wink. However, Gable is missing for most of this stretch of the film and we are left with Harlow trying to get along in a place with women all too similar to herself. Here she deals with another woman who knows Eddie, and wonders if he still wants her. How is Ruby supposed to hold the man she loves if she cannot see him?

Ruby does in fact reform to some degree. Al comes to visit her and proposes marriage, with the full knowledge of her pregnancy. The old Ruby would have likely jumped at the chance to get out of prison and marry a man who would have taken care of her, but she is now cursed by love. She no longer wants to take advantage of other people and even takes the blame for another girl, preventing her from getting into trouble.

Hold Your Man seems to be working on a moral lesson but it is a bit vague. It says to hold your man you simply need to love him. This is not actually accurate or deep. Just before speaking the song that Scott mentioned, one girl says to Ruby, "If you want to hold your man, give him everything you got." Ruby did just that and is now wondering if that was the best path to take. The movie never makes a firm stance one way or the other. Both leads end up in trouble but it also ends on a happy note. So what was the point. Hold your man with love or by getting knocked up? Either way, the journey of this story is far more fascinating than the destination.