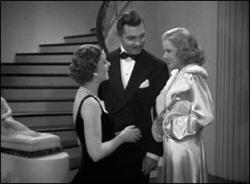 Wife Vs. Secretary is probably one of the worst names for a movie ever written. That is until Snakes on a Plane came out. Both titles explain the plot of their movie quite succinctly, but Wife Vs. Secretary deserved a better title. It implies an all out feud, when in fact the movie is refreshingly subtle.

Gable and Loy play a deliriously happy, married, rich couple. It opens with the morning after he just came home from a business trip. Although they share separate bedrooms for some reason, it is made clear that they just had sex that night. They have several servants, so it must be Loy's companionship, and not her cooking and cleaning skills that attracts Gable to her, and who can blame him? Loy was one of the most charismatic actresses of her time.

Harlow plays Gable's secretary. She is actually more like his assistant. She does far more than just answer phones and type. She is also notably attractive. People throughout the movie remark on her looks. In one scene she is dancing at a party with Gable, while three men are watching her. The two younger ones make suggestive comments and then the older one says, "Gentlemen, even I could give that little lady dictation."

The movie was made in 1936, so the sexual attitudes are, thankfully, politically incorrect. When Loy seeks comfort from her mother in-law, after she suspects Gable of having an affair with Harlow, his mother tells her to not be too hard on him and that, "You wouldn't blame a little boy for stealing candy if left alone in a room with an open box full."

The movie starts in a safe place but then moves closer and closer to the moment of truth. At first Gable and Harlow are just employer and valued employee. After her mother in-law puts a bug in her ear about how she should have Gable get rid of his attractive secretary, Loy begins to suspect something, even when there is nothing actually going on.

The honesty of Wife Vs. Secretary is how Gable and Harlow start out with a close business relationship and how they almost become so much more. They do not plan anything. They just find themselves alone in a hotel room after having some drinks. Their progress to that point is slow but foreseeable. Loy ends up calling and Harlow answers the phone.

As expected, Loy gets upset and leaves Gable. This opens up Harlow's shot at him. After working for him all this time, she realizes that she does indeed have feelings for him. But Harlow is the noble character here and she goes to see Loy who is about to take a trip. She asks her if she is leaving Gable for good. After Loy says yes, Harlow says the movies most famous line, "You're a fool, for which I am grateful." I am not going to ruin the ending for you completely, but it does play out nicely.

Although there are some good lines to be heard here it is often the silence that speaks volume, whether it is Loy watching in silence or the scene of Gable and Harlow alone in the hotel room. To often today's films want to spoon feed the mood with tons of vocal exposition. Some of those old films knew when to talk and when to let the scene speak for itself.

Clark Gable and Jean Harlow in Wife vs. Secretary.

Obviously, the Production Code is what kept Van and Linda in separate bedrooms.  While it's clear that they just had hot sex the night before and are quite physically demonstrative with their love, the script has Linda say she didn't want Van to leave her room the night before and Van say that he didn't want to go.  Well then, why did he leave?  A perfect example of the ridiculousness of the Code.

This was the fifth of six Gable/Harlow pairings and as always they share a great chemistry, although this is a very different part for Harlow compared to her usual brassy blonde persona.  Here she's actually quite effecient and noble.  Pre-Code Harlow wouldn't have batted an eye about sleeping with a married man, but here she follows the moral path.

Loy and Gable also share a nice chemistry even if Loy does seem too classy for him.  Although Gable is playing an uppper-class CEO, you can still see the scamp inside the suit.  He's more of a rough-and-tumble man's man than he is a Park Avenue sophisticate.  Both he and Harlow are playing against type, while Loy is playing the typical role that she played so well.

With this cast, the premise and the silly title, I was expecting more of a screwball comedy, but this is comedy of a more gentle sort.  There are some funny moments, but also some moments of touching drama.  It's more like a modern romantic comedy in tone than a 1930s screwball comedy.

This isn't the best movie any of the three leads made, but any movie featuring the three of them is bound to have some good things going for it and this one definitely does. 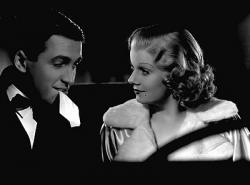 James Stewart and Jean Harlow in Wife Vs. Secretary.

As the title certainly does suggest it, I was expecting more of a screwball comedy as well. The fact that this is a subtle sophisticated romance with humor is probably due to the great Clarence Brown. He doesn’t get enough recognition but the man was a gifted director. He began helming movies back in the silent era. He was instrumental in launching the career of Greta Garbo and directed such classics as Flesh and the Devil, Anna Christie, The Rains Came and National Velvet. He died in 1987 at the ripe old age of 97.

Wife Vs. Secretary has a glossy stylish look. The costumes and sets are sumptuous in that glorious B&W 1930’s manner that MGM excelled at. The Stanhope’s Manhattan penthouse is fabulous. I loved their stairway with its breathtaking view of the city's skyline.

Scott is right that Gable and Harlow are both playing against type. Harlow’s “Whitey” is definitely a toned down and more genteel character than she usually played. Her grammar is correct and she doesn’t burst into spoiled tantrums. Gable is likewise playing less of the scalawag than usual. Scott, I disagree that Loy seems too classy for him. Not that she wasn’t classy - her picture should be in the dictionary under the definition - but I thought Gable pulled off the upper-class, club-going, blue-blood rather well. Unlike Rhett Butler Van Stanhope is definitely a gentleman.

Not that it matters Eric but it is a fishing vacation not a business trip that Gable has returned from at the beginning. Scott I know you hate what the Hay’s Code did to Hollywood but I have never much been bothered by the separate beds or bedrooms in movies after the Code was enforced. There is not a movie that was made during this period where any adult can’t easily tell when it is implied that two people are having sex. It is not necessary to spell it out and it adds a layer of mystique that I find interesting.

While I am against censorship I don’t mind the effect the Hay’s Code had on Hollywood. Do you really think these movies would have been better with coarse language and nudity? Because without the Code that is exactly what would have happened decades sooner than it did. I for one am grateful for that quarter century of Hollywood innocence.

But let’s get back to the movie at hand. I can’t believe my brothers didn’t bother to mention James Stewart making just his fourth movie appearance as Harlow’s brash young suitor. He has one good scene where Harlow discovers him sitting in his car after she has stood him up on a theater date. He shows hints of his dramatic talents to come and brings a refreshing naturalness to the screen. I also enjoyed the wonderful character actress May Robson as Gable’s advice giving mother.

Wife Vs. Secretary is a celluloid gem sparkling with the talents of four Hollywood legends under the guidance of a brilliant director.  In place of a screwball farce you get an understated romantic comedy with heart.