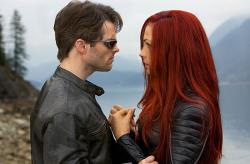 James Marsden and Famke Janssen in X-Men: The Last Stand.

Every superhero movie balances precariously on the ledge of coolness with the pit of campiness yawning below them. Grown-ups in enough spandex and leather to fill an Adult Video Convention inhabiting a world where super powers are the norm is much trickier to pull off convincingly than it might seem. The first two X-men films, two of the best examples of the genre ever, strode that ledge with confidence. X-men: The Last Stand -- while still a very enjoyable film -- doesn't fall off the ledge, but it does wobble a bit on the edge.

The plot of the movie centers on the discovery of a "cure" for the mutant gene. While the creator of this new wonder drug, which is derived from the blood of another mutant whose power it is to nullify all other mutant's powers, claims that the cure is strictly there for who ever wants it, his real motivation in developing it is to "cure" his son Warren of the large wings growing out of his back that have earned him the moniker of Angel.

Magneto sees the news of the cure as his chance to rally more mutants to his cause. When it is discovered that a law enforcement officer is carrying a gun packed with darts containing the cure, Magneto raises an army for the purpose of taking out the lab where the drug is produced. The lab sits on Alcatraz Island.

Further complicating matters is the newly resurrected Jean Grey, who died at the end of the second movie. She's now incredibly powerful, angry and not a little insane. It doesn't take Magneto long to recruit her to his cause.

The X-men not only have to stop Magneto and rescue Jean, but also deal with implications of the cure, which tempts some of them with the idea of living a normal life.

One of the things that made the earlier X-men films great was that they were very much character driven. This installment is much more plot and action driven. There are still moments of X-men angst, but they take a back seat to the action, some of which is over the top. Such as when Magneto uses his power to rip the Golden Gate Bridge off its moorings and float it out to Alcatraz. This is very showy and all, but wouldn't it have been simpler and more of a surprise attack if he and his army had just stolen a few boats?

Perhaps a better example of how this movie loses much of the emotional weight of the earlier films is how the two films show the death of a major character. When Jean died it was affecting. In this movie, not one, but three major characters are killed off (one in the first 10 minutes) and all of them added together carry less impact than the one did in X-men: United.

Some of the dialogue is also a bit suspect. When Juggernaut proclaims, "I'm Juggernaut, bitch!" to Kitty, it elicits a laugh, but feels very out of place.

There is still a great deal to enjoy in this third and supposedly last installment of the X-men saga. Hugh Jackman is still great as Wolverine and Kelsey Grammer does a good job as Beast, the new kid on the block this time around. If you enjoyed the first two, you will undoubtedly have a good time with this one, just not quite as much.

Since this is the first of the films not to be directed by Bryan Singer, I suppose the blame will be laid at new director Brett Ratner's feet. It remains to be seen however if X-men's loss will be Superman's gain, as we await Singer's Superman Returns due out later this summer. 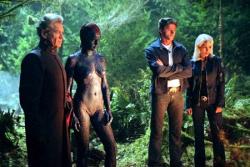 It would probably be a lot more entertaining if I disagreed with Scott's review and ripped his opinions apart. But since he pretty much hit the nail on the head, I won't. Yes, this installment of the series is enjoyable, it gives good eye-candy, and does nothing to seriously tarnish the franchise's reputation, but neither does it add any luster. And maybe, as the producers have claimed, this is going to be the final installment, but they certainly ended this one with a tantalizing tease.

Wolverine is the standout character here, Storm has more lines than in the previous movies, and Beast is a good addition. Angel is way underused however, and I was a bit disappointed in the character of Jean Grey. She may be the most powerful mutant ever but she is always being controlled, guided or saved by a male character, whether it be Professor X, Magneto or Wolverine.

I don't mind a campy superhero movie. The Fantastic Four was fun. But whether campy or serious a superhero movie should have an even tone to it. This one is a bit unsteady.

The Golden Gate Bridge to Alcatraz scene is a bit much, but the fight that ensues is great summer action movie fare. I really liked seeing the intellectual and peaceful Beast kicking some serious butt. So, though this one won't be as much of a critic's choice as the first two installments it is nonetheless a worthwhile summer blockbuster. 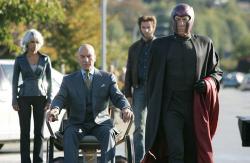 Several main characters die! What the hell is that? One main character chooses to lose their powers! What the hell is that? I disagree completely with you Patrick, X-Men: The Last Stand does seriously tarnish the franchise's reputation. Not just because it foolishly kills off the heart of the trilogy, but because it changes the personality of some of them. Professor X is now a bit dark and Jean Grey is a completely new character. Her role is for show and has nothing to actually do with the gist of the plot.

The movie starts out well enough. Scott is pinning over the loss of Jean and has this great line to Wolverine, “Not everybody heals as fast as you, Logan.” But then the movie veers off course and the emotional level of the film is left to characters like Storm, who has always been played as a personality lacking cold fish and Wolverine who has always been allowed to dominate the series to the degree of sacrificing other characters development.

The X-Men are a team and too often it seems that the writers of this movie put him in scenes just for the sake of it, even when a different and more logical plot path is in plain sight. The best example is the end of the movie when Wolverine does battle with Phoenix. Two side plots offer better ways to resolve the Phoenix issue. One is to have Rogue, who has been spending the movie contemplating getting the cure, show up and suck Phoenix's power and thus decide that her powers are needed and valuable. Two, would have been to use the boy who carries the cure to disable Phoenix. He is constantly talked about throughout the movie but he really does nothing. The movie attempts to have an emotional climax between Logan and Jean but they have never really had any chemistry so the scene is not as emotional as they want it to be.

Hugh Jackman has announced that he will be doing a Wolverine Spin off movie. My comment is that these have always been Wolverine's movies. What should have always been an ensemble piece has always just been The X-Men: starring Wolverine. The Last Stand simply reinforces that by pointlessly killing off and pushing aside the other characters!