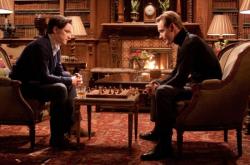 X-Men: First Class cleverly ties itself to the earlier X-Men franchise by opening with the first scene from the original X-Men film when young Erik Lensherr is being separated from his parents in a concentration camp in 1944. First Class than continues the scene and the story of Erik in the camp. Although the story here doesn't completely synch up with the story and actions of certain characters from those earlier films, it does at least acknowledge them with this and a few other nice moments scattered throughout. It's a respectful way of rebooting the series and I appreciate that.

While Erik was enduring the trauma of the Holocaust, Charles Xavier was growing up in an affluent suburb of New York. While Erik demonstrates an ability to manipulate magnetic waves, Charles is able to read minds, both of them being mutants, or as they're more poetically known, children of the atom. We know them from the earlier films as Professor X and Magneto as played by Patrick Stewart and Ian McKellan. Neither James McAvoy or Michael Fassbender, who play Charles and Erik respectively, attempt an impersonation of Stewart or McKellan, but it's still easy to see these being the same characters.

After the initial introduction of the two main characters, along with the blue-skinned Raven/Mystique, who becomes Charles' adopted sister, the story jumps ahead to 1962. An adult Erik is on a course of revenge against any surviving Nazis. His ultimate goal is to find Sebastian Shaw, the man who killed Erik's mother in an attempt to bring out Erik's powers. Fassbender does a great job in the part. He's dangerous and quite badass. I would have happily watched a movie starring just him.

Charles, meanwhile, is attending Oxford and receiving his doctorates degree, when he is approached by the American government with a request to help them track down the same Sebastian Shaw that Erik is hunting because they believe him to be in league with the Russians. While McAvoy seems less likely to grow up into Patrick Stewart than Fassbender does Ian McKellan, he does manage to play a likable and charming Professor Xavier.

To make a long story short, Charles and Erik eventually team up to prevent Shaw's scheme, which is tied up with the real historical events of the Cuban Missile Crisis. Charles and Erik assemble a team of young mutants, who become the original X-Men. Although this all leads up to a big climactic battle, the assembling of the team and the interaction between Charles and Erik were my favorite parts.

The 1960s setting gives the movie added style. The fashions and sets, especially Shaw's Las Vegas lair and his submarine, are very mod and swinging sixties.  Kevin Bacon is likewise very retro, playing up the part of Shaw with Bond villain like glee.

I loved the first two X-Men movies and even the third installment had its moments. I love how this movie ties itself to those movies, without being slavish over the details. It's a great way to reboot the series and I can't wait to see the next one. This is my favorite blockbuster of 2011 so far. 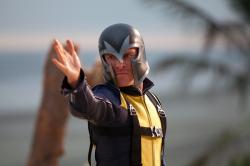 Superheroes connect with audiences on two levels.  First is that they can be badass entertainment having amazing powers.  The second is that they all have insecurities, hardships or internal demons, that make them all to human.  Kal-El is alone on a planet of Aliens.  Batman never got over his childhood trauma.  Peter Parker never thinks of himself as good enough.  Tony Stark is a drunk.  The list goes on and on.

The X-Men exemplify this better than any other title.  They are young people with fears of not fitting in.  They all find themselves with abilities they do not understand.  Some cause physical abnormalities.  They seek shelter under the mentorship of Magneto, who preaches be loud and proud, or Professor X who believes in assimilation.  It is an interesting argument over who has the better approach.  Mystique is the one character most torn between their philosophical views.  She must make a very bittersweet decision.

The dynamics between Charles and Erik are fascinating.  Charles Xavier, "Killing will not bring you peace."  Erik Lehnsherr, "Peace was never an option."   Charles, "We have it in us to be the better man."  Erik, "We ALREADY are."  I could listen to them talk all day.

They are like parents for the young mutants.  Charles acts as the mother who wants to comfort and coddle the children, while Erik is the father who pushes them, sometimes literally.   The scene where they teach Banshee to fly is the perfect example.  It is a shame they eventually divorce as they are a great team, making up for each others weaknesses.

As Scott wrote, X-Men: First Class is a great reboot of the series without wiping the slate completely clean, such as what happened in the latest Star Trek film.   It is a fine line to walk.  The use of a historical backdrop is very affective and should become a standard part of the series.  It is another way to connect these fantasy characters to reality. 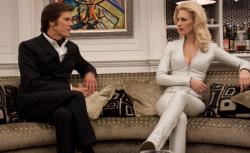 Eric, I like your marriage analogy between Professor X and Magneto. They share a very intimate bond. I could easily imagine them as lovers, especially during the scene on the beach at the end. It is an appropriate idea since once again in an X-Men movie the state of being a mutant is compared to being gay. Hank McCoy even says the line, “They didn’t ask, so I didn’t tell” in referring to his identity as a mutant.

At any rate Xavier and Erik do make a great team and the dynamics of the tension between them is at the very heart of the entire X-Men universe. McAvoy and Fassbender are both good. McAvoy brings a humanizing touch to the young Charles Xavier portraying him as a bit of a ladies man, while Fassbender brings some sympathy to Magneto as well as being a ruthless badass. As Scott said they don’t obviously impersonate Stewart or McKellan but you can picture them aging into their older counterparts.

Eric, I agree with your first paragraph but would add humor as a necessary ingredient as well. Superhero movies should never take themselves too seriously. X-Men: First Class effortlessly blends in just the right amount of levity, whether having Mystique walking around in her nude blue skin or by Charles Xavier joking about going bald. There is also a very funny cameo by one of the most famous X-Men of them all.

X-Men: First Class is indeed a satisfying reboot to a very successful superhero franchise. As my brothers wrote it balances staying true to the first four movies while introducing new characters and handling the different time era beautifully. Setting this one in the past was a masterstroke. The run time is a bit excessive but that is my one tiny complaint. I do have one question though. Did Stan Lee not make a cameo appearance this time around? I didn’t spot him if he did.