Nicholas Hoult, James McAvoy and Hugh Jackman in X-Men: Days of Future Past.

There have been a glut of superhero movies since the first X-Men film was released in 2000. 14 years since that first installment, the franchise is still going strong and remains the most consistent superhero series of them all. Apart from the first Wolverine solo film, all of the films have been of a very high caliber and this, the latest in the series, is no exception, being just as enjoyable, if not more enjoyable than all those that came before it. It also helps that the series has maintained a consistent universe (despite some minor inconsistencies and plot points that don't always align between films) without restarting the series. Yes, the previous film was a prequel with new actors playing younger versions of the same characters, but they're the same characters, unlike the Spider-man series for instance, where Tobey Maguire's and Andrew Garfield's Peter Parker have no connection.

The secret to the series's success is in large part because of the way the filmmakers keep the focus on the characters rather than simply using them as living cartoons put on film to service the special effects. They also tend to avoid the supervillain looking to take over the world plot that inevitably leads to a final CGI battle that levels a major city, as has become so common in today's superhero films. It also helps that the characters are all wonderfully cast. What other superhero movie can you name with 7 Academy Award nominees among its leads?

Fans of the comic books will be familiar with the gist of the plot. The story of the mutant hunting Sentinel robots is second only to the Dark Phoenix saga in X-Men lore. It is similar in structure to the Terminator films. In the future, the planet has been decimated by machines. Giant robots, created to destroy mutants, have gone one step further and started to kill all of mankind because they can detect which humans might someday produce a mutant descendant. The surviving X-Men come up with a scheme to send Wolverine (played by Hugh Jackman for the 7th time) back in time to the 1970s to stop the event that triggered the beginning of the Sentinel program. This time travel element allows the original cast of the X-men and those from the recent prequel to appear in the same film at different times. It's a nice way to tie the series together even further.

Along with the old faces, we are introduced to several new mutants. The most entertaining of these is Evan Peters as Quicksilver, whose mutant power is super-speed. He provides some nice moments of comic relief.

Although there are good guys and bad guys, they aren't really black and white and there isn't truly a central villain. Peter Dinklage plays Trask, the scientist responsible for the Sentinels, but he doesn't come across so much evil, as he does simply as someone fearful of mutants. Magneto (Fassbender), as usual, is one of the most interesting characters. He and Mystique (Lawrence) are both aligned on the wrong side of the law, but they are colored in shades of grey rather than pitch black. The only true villains are the robots who are faceless, soulless, killing machines.

There are several big moments of entertaining action and plenty of special effects on display. However, none of them dominate the story the way the characters do. There's enough to satisfy those who looking for it, but they're not the reason to watch.

Director Bryan Singer, who returns to the franchise for the first time since X-Men 2, does a great job of working in the large cast. Jackman, McAvoy, Fassbender and Lawrence are the stars, but he manages to juggle the many faces, including a few surprises, in a way that is mostly satisfying. A few characters seem to get very short shrift, such as Halle Berry as Storm and Anna Paquin as Rogue, but given the time constraints he does a great job.

The X-Men universe is a rich and diverse one, with plenty of stories to tell. Many of the characters in this one could sustain a movie of their own. This one will reward longtime fans of the franchise. It just remains to be seen if it will appeal to a wider audience. It certainly deserves to. It's far superior to any other superhero movie that has come out lately.

Michael Fassbender in X-Men: Days of Future Past

I agree that this franchise is still going strong and unique as it has nothing to do with any other movie series. As Scott wrote, the world these characters inhabit is a rich and diverse one and many of these characters could sustain a movie of their own. That is the movies strength as there is a seemingly endless supply of interesting characters to draw on. The weaknesses being that the writers of this movie cannot seem to see past Wolverine, once again making what should be an ensemble piece, involving more than a dozen heroes, one about four.

The filmmakers have developed great characters out of Wolverine, Charles Xavier, Eric Lehnsherr and Raven. Wolverine is the classic loner, holding himself apart from everyone else until circumstances pull him into a group setting. Charles and Eric genuinely respect each other even as they desperately try to change the others point of view.  They each try to manipulate Raven for their own gain, while she just wants to find a place where she belongs.

More than a few characters get very short shrift. Storm has as much seniority as Wolverine, yet we have learned nothing of her past or personality in any of these films. All she is given here is one, albeit good, moment in an action scene. First Class introduced some heroes with potential but Havok only has a brief scene and Banshee is nowhere to be found.  Colossus is again underused and if you blink, you will miss Rogue. The secret to the series’ success are the many characters but I would like the supporting characters to not be treated as living cartoons put on film to service the special effects.

The one exception is Quicksilver, who does indeed provide some nice comic relief. The scene in the kitchen, where we see everything from his super speed perspective, is brilliant. That is how the supporting heroes should be highlighted. We learn something about him with the visit to his home and then his powers are entertainingly showcased.

X-Men: Days of Future Past starts with a strong teasing premise. It seems to wander a bit in the middle of the film with the usual suspects getting on planes to fly to and fro in search of Raven and Trask. The flow of the film is a tad clunky but it ends strong with a double action scene, one taking place in the present and the other in the future. I would have liked the future battle to have been longer as it does not feature Wolverine and it was exciting seeing the other X-Men do battle without him.

I get that Charles and Eric are, as explained in First Class, the spiritual parents of the X-Men. Their presence is always needed. In that film, other X-Men were allowed more screen time, making that one of my favorite superhero films. Here, Wolverine is back to dominating a movie that is supposed to be about a team of super heroes. Sure, Wolverine is bad ass but he has his own series. Let these other heroes have more than just a brief moment in the spot light! 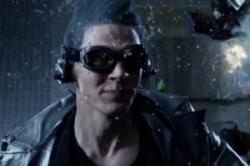 Evan Peters as Quicksilver in X-Men: Days of Future Past.

Wolverine does indeed dominate the storyline yet again. In the comic book on which this movie is based it was Kitty Pryde who traveled back in time, not Wolverine. Here the filmmakers show their bias by entrusting this task to Logan. Sure Jackman is as good in the role as ever but it would have been nice to see the action spread around a bit more. Perhaps in the next movie X-Men: Apocalypse (already scheduled to premiere Memorial Weekend 2016), this will be the case. At any rate, regardless of which mutants get more or less screen time (Halle Berry's pregnancy limited her participation), X-Men: Days of Future Past is one solidly entertaining big budget superhero movie.

I've always enjoyed the fact that the X-Men are set in the real world. They live in New York City, not Gotham or Metropolis, and their storylines often feature fictionalized versions of actual people. Here for example, President Nixon is a character in the story set in the early 1970s. Mark Camacho does a decent impression of the often imitated Nixon. In this version of the past, Magneto is serving time for JFK's assassination. Like in First Class, the time period is colorfully conjured up. The decade is in little doubt once Wolverine wakes up lying next to two different women, in a waterbed, with a lava lamp next to it, while Roberta Flack sings “The First Time Ever I Saw Your Face”.

The plot is intricate without being convoluted, the cast does terrific work (it's nice seeing the old faces back as Magneto and Professor X – who says comic book movies have to be a young man's game?), and the story moves along at a nice pace. I didn't notice any clunky flow to the story that Eric complained about. In fact the X-Men are about the only superhero movies where I never check the time or wonder how much is left.

While it's true there's no typical movie villain, Dr. Bolivar Trask is a truly scary man. His very decency and seemingly beneficent goal provide the perfect cover for his (true) plan of mutant genocide. Bryan Singer says he based the character on the most infamous dictator of them all. “As Hitler used the Jews as a scapegoat to bond the darker parts of Europe, he's doing the same thing with mutants. But he wasn't a six foot, perfect blond Aryan - he was a short, funny looking fellow!” Peter Dinklage is the perfect actor for the role. Who else could play a character modeled after Adolf Hitler and make him even a little bit sympathetic?

The ending is sublime. The X-Men universe has been reset and I can't wait to see what happens next...