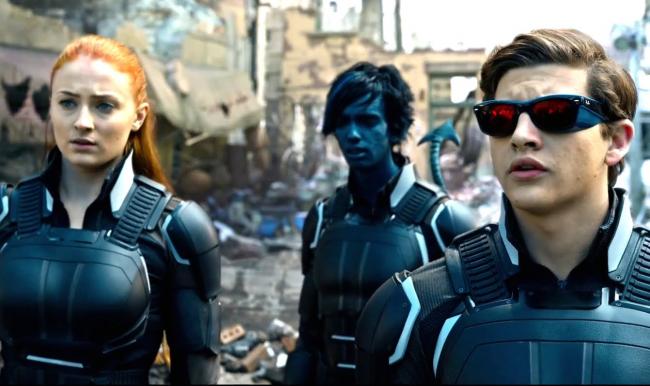 Of all the many superhero franchises glutting theaters these days, the X-Men films remain my favorite. This is for a couple of reasons. One, because it's the comic book franchise I read the most as a teenager, and two, because they always seem to realize that characters are more important than spectacle. As strange as it may sound, given the presence of superheroes, their movies feel more rooted in the real world. That's why I found this, the latest X-Men film, to be a bit disappointing. It feels too much like every other bloated superhero movie on the market today, with a central bad guy intent on world domination, climaxing in a special effects laden battle that pits superhero against superhero.

The story is set in the 1980s, but the prologue begins thousands of years earlier in Egypt, where the original mutant, known as Apocalypse (Oscar Isaac) is ruling as a god. An uprising against him results in his being buried, but still very much alive. When he awakens, in the 1980s, he wastes little time in recruiting helpers and restarting his plans to conquer the world, and destroy it in the process. His choice for his "Four Horsemen" helpers are a combination of familiar and new faces and include Magneto, Storm, Psylocke, and Angel. Naturally, it's up to the X-Men to stop him.

One of the problems with a movie universe filled with so many characters is that when you try to include too many of them, none of them get the attention they deserve. Psylocke and Angel make very little impression. Magneto's submission to Apocalypse never rings true. And even Professor X, the heart of the franchise, feels underrepresented. Apocalypse himself is a boring villain and an actor of Oscar Isaac's caliber is wasted under all that makeup. Although, for once, Wolverine isn't a central character in the story, the filmmakers can't resist including him in a scene that feels more like fan service than a relevant plot point.

The most entertaining characters are the younger mutants Scott Summers (Cyclops), Jean Grey, and Kurt Wagner (Nightcrawler). Nightcrawler (along with the scene stealing Quicksilver) provides some comic relief, while Jean Grey hints at the dark power that lives within her. I wish the entire film had been told from their point of view. It might also have shortened the running time, which is a butt punishing 2 hours and 23 minutes.

Although I sound critical, I did still enjoy this movie. These characters and this world are as intriguing to me now as they were all those years ago when I would be engrossed in the pages of the many X-Men comic books. It's the interaction of these characters that I find interesting, much more than watching yet another CGI filled, special effects laden, battle, the outcome of which is never in doubt. This franchise has always attracted genuine actors, including several Oscar nominees/winners, but they are given little chance to exercise their acting muscles here.

Perhaps my expectations for X-Men films were set too high. I've come to expect greatness from them, while this one is merely good. It was the original X-Men film, released in 2000, that really kicked off the modern superhero genre. It took years for other superhero movies to catch up to them, but with this movie, the X-Men seem to be following the trends rather than setting them. 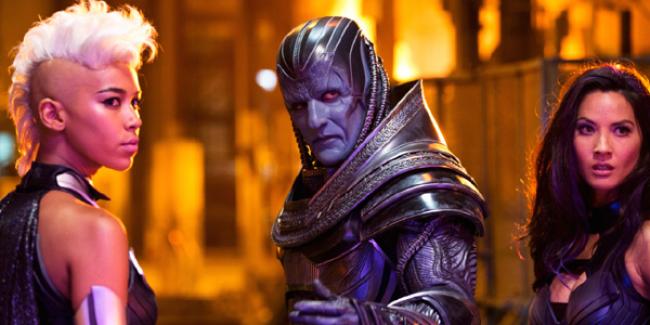 I was never a fan of the X-Men comics ( I preferred Teen Titans) but I do enjoy the movies – even though I think there are far too many superhero movies being made these days. X-Men: Apocalypse is another solid entry in the series although I do concur with my brother that it isn't quite as good as the two previous installments in the series. With First Class it was fun seeing new (younger) actors in these iconic roles. With Days of Future Past we got to see the two different casts in the same movie. Now with Apocalypse it seems that the torch has been passed and the newer cast is here for the duration.

I've enjoyed traveling through time with the X-Men. We've seen the 1960s, 1970s and now the 1980s. The ages of the various characters and actors don't always fit together but that is a minor quibble and anyway many of these mutants age very slowly or not at all, rendering the age point moot.

As Scott said this X-Men movie plot is less distinctive. In fact it's downright formulaic. How many times have we seen a powerful being from ancient times revived in the modern era ready to wreak havoc on the world? And infighting between superheroes is definitely the theme of 2016. We already had Batman v Superman and Captain America: Civil War. In X-Men: Apocalypse there are scenes where X-Men battle X-Men.

I also agree that Oscar Isaac is indeed wasted as Apocalypse, buried under all that makeup. He is a one note character with no room for growth. At the risk of sounding like a broken record I also agree that the younger mutants steal the movie. Jean Grey, Cyclops and Nightcrawler provide the most entertainment, while the young Storm starts off as a villain. I would like to see more scenes with these characters in school interacting with each other. The action scenes are nice but I enjoy the character development that has always played an integral role in these films.

In my review for Days of Future Past I wrote that I couldn't wait to see what happens in the X-Men universe next. I can't say I was completely disappointed with this movie but Apocalypse is definitely a step down from that one. I'm still anxious to see where the story-lines go in the next installment but my expectations have been lowered a bit... 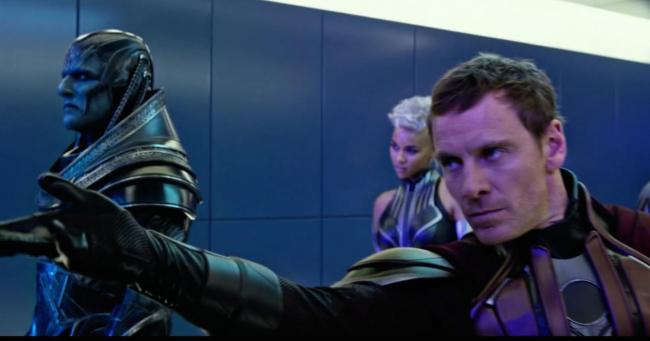 The plethora of characters are indeed a consistent problem with the X-Men movies. Based on who your favorite character is and how much screen time they get may greatly affect your opinion. Cyclops/Scott Summers has always been one that I felt was under written and under appreciated. Although he gets plenty to do here, he is still not treated with the care he should have been. It begins well when he finds himself frustrated and scared by his new powers, that he discovers while in school of all places. The film then skips to him being at home where his parents barely react to the fact that he nearly just killed another student. Later he and his brother Alex/Havoc are robbed of a dramatic scene together. Also, Scott and Jean are supposed to become a couple yet there is barely any personal connection shown between them.

Erik Lehnsherr/Magneto submitting to Apocalypse rang true enough for me. He has always been a man who straddles the morality fence. As this film begins, he is living a domesticated, blissful life. After tragedy strikes, he allows his dark side to come out and is certainly in the mood to take his anger out on a world he has never felt treated him fairly. Of any of the actors in these films, it is Michael Fassbender that stands out for me. He allows us under the skin of Erik's constant struggle to find some form of peace in his life. Sometimes he thinks it will come in the form of love and other times he believes he has to fight for it.

I agree completely with my brothers that Apocalypse is a boring, one note villain. He has the powers to do pretty much anything, including live forever, but all he wants to do is destroy the world and rebuild it, somehow, into a better one of his suiting. If you can already do anything, what is this better world possibly going to be able to provide you with? He never mentions desiring anything but power for power's sake. He looks at humans as humans look at ants. At least when the Mummy came back to life he was motivated by a long lost love. That we can relate to.

I will also agree about the filmmakers including Wolverine in a scene that, although not exactly out of place, is played wrong. Cyclops, Jean Grey, and Nightcrawler, having snuck into a secret facility to rescue some other X-Men, become too easily sidetracked by the presence of Wolverine. It is as if they temporarily forget what they were there for. Between the treatments of the guest appearances of Wonder Woman in Batman v Superman: Dawn of Justice, Spiderman in Captain America: Civil War and Wolverine's here, his is easily the most obtuse.

As my son and I left the theater, he asked what my favorite part was. I have to say that it was when Jean Grey taps into the power she is scared to release. As a fan of the series, it created an emotional reaction in me but it would have carried even greater weight if the scene she and Scott shared on the school grounds had better divulged her insecurities. We would have had a better reaction to her anxieties when she finally called upon those powers. I am with my brother Patrick on wanting to see more scenes of these characters interacting outside of a fight scene. After all, the more we get to know and like these characters, the more emotional investment we have in them when they do come under attack.

Although this installment is not everything I hoped it would be, it is high praise to write that we want to see these characters again and learn more about them.