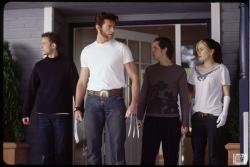 Hugh Jackman as Wolverine, leads the young mutants in X-Men 2.

There is no denying that that the first movie was an excellent piece of blockbuster entertainment.  After setting such high standards, I was curious whether or not they could sustain that level in the sequel.  As I discovered tonight, they didn't only sustain it, they surpassed it.

Having introduced most of the characters in the first film, they were able to jump right into the action.  And jump they do.  The movie begins with a scene brimming over with action as a mysterious mutant attempts to assassinate the President of the United States.  He is thwarted at the last second, but his actions spark the smoldering Mutant debate into flaming hostilities.

Professor X, anxious to discover the truth of who was behind the assassination attempt, sends Storm and Jean Grey to capture the guilty mutant and bring him back to the X-men mansion.  The Professor and Cyclops, meanwhile, pay a visit to Magneto, still imprisoned in his plastic cell, to see if he can shed any light on the recent events.  Wolverine, fresh from his trip to Canada, where he unsuccessfully attempted to discover his past, is left to mind the students and the school.

What follows is one of the best sequences in the film as the military, on orders from the President and Colonel Stryker (the man in charge of handling the 'Mutant Problem'), assault the mansion.  The ensuing battle is both bloody and exciting.  Wolverine, a one man army in his own right, hacks and slashes an escape route for himself and as many students as he can gather.  Unlike the first movie, wherein no one seemed to ever really get hurt, this movie doesn't stint on the death or destruction and the action is tenser because of it.

After fleeing the mansion, Wolverine and the handful of students accompanying him, soon hook up with Storm, Jean Grey, and Nightcrawler.  They are shortly joined by Mystique and Magneto, who is freshly escaped from prison.  Together they join forces to locate Professor X and Cyclops, who have both gone missing, and also to discover who the real power is behind the anti-mutant movement.

Along with the returning cast from the first film, we have the introduction of Nightcrawler (Alan Cumming), who provides a few laughs as well as the opening moments of tension.  Hugh Jackman is as good as always, better even, since this time around his character is allowed to be even more violent and bloody.  His claws are used for more than just cutting through shotguns and chain-link fence in this one.  Halle Berry, who I singled out in the first movie as being a disappointment, is much improved in this one, thanks in large part to the improved dialogue.  She no longer has to utter lines like, "You know what happens to a Toad when its struck by lightening?  The same thing that happens to everything else."  And instead gets to use her powers and her acting ability to good effect.

The movie builds to its climax at a fast pace as the Mutants launch their counter-attack on the stronghold of their enemy.  We learn most of the truth about Wolverine's past and even set up the plot for the next installment.

With improved special effects, a stronger story, better action sequences, and the same great cast with a few nice additions, X-men 2 is the best movie I've seen in a really, really long time. 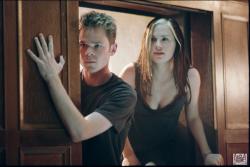 Scott is right. X-Men 2 improves on the original in much the same manner as Empire Strikes Back improved on Star Wars. Meaning that it unspools at a more breathtaking pace, has better FX, is darker in tone and ends on a cliffhanger. And if that isn't enough it features the best acting I've seen in any superhero movie (with the possible exception of Superman).

Nightcrawler has always been my favorite character from the comic books. Alan Cummings does a great job showing us his introverted spirituality as well as his sense of humor. What has always set the X-Men apart from other superheroes is that they were born out of the civil rights movement and have always, at heart, been about tolerance and accepting the differences in others. As such, Nightcrawler, with his demonic looks and sulfur spewing teleporting abilities, embodies the role of the social pariah more than just about any other character in the X-Men universe.

Again the acting is flawless. And while this is a given from talents such as Ian McKellen, Patrick Stewart and Halle Barry, I was pleasantly surprised at the moving performance James Marsden gives as Cyclops. I won't give away the details but near the end of the movie he pulls off an intensely emotional moment with great sincerity.

Since both of my brothers are bigger fans of the genre, I am the most qualified of the three of us to say that, unlike Spiderman or any of the Batman movies, X-Men 2 can be enjoyed by anyone. It transcends the genre. The interpersonal relationships of the characters exceeds what we normally get from these movies. And the plot is so much more than just costumed heroes fighting an evil bad guy bent on world domination. The X-Men universe, much like our own, has a far less distinct line between hero and villain. I guess that makes X-Men 2 the thinking man's superhero movie. 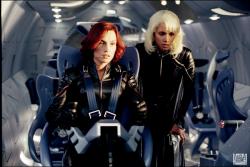 This movie takes place exactly where the first one ends. Remove the credits and you could combine these two movies to make one large one. What makes the first movie great, a sincere treatment of the characters, makes this movie great. The big flaw in the original movie, poor editing, is still a flaw in this one.

The first movie has the scene in the train station. Cyclops looses his visor and Storm gets choked. Magneto, along with Sabretooth and Toad have a lengthy scene trying to get out of the station. At no time does the movie explain what Storm is doing. Obviously she didn't die. Why didn't she do something? In this movie several X-men aboard their jet are doing battle with two jet fighters. They get saved by Magneto who just happened to know where the X-men's jet was? It is never explained. It is just one of those movie coincidences best left unquestioned.

Like the first movie, this is not a completely flawless film. Yet it is such a great superhero movie that the minor imperfections can be over looked. Patrick, however, is dead wrong when he wrote that "X-Men 2 can be enjoyed by everyone." My wife, who has never read an X-men comic book, said after the movie, "I have no idea what I just watched." In my opinion X-men 2 can be enjoyed by anyone who likes this genre.

I do agree with Patrick on James Marsden's performance. I thought he was a good actor several years ago when he was on the ill conceived television show Second Noah. He demonstrates here that he could be the next break out X-men star.

Jackman gets to strut around as Wolverine. The needed acting range for his character is to look tough and sneer. Marsden has the difficult job of acting without the use of his eyes. He was very successful in his big dramatic scene. I watched that scene and got a bit choked up. I thought to myself that it was silly to get so sentimental about these superhero characters. The actors and the director play it all so straight that my emotional response is a testament to Marsden's acting as well as Bryan Singers direction.