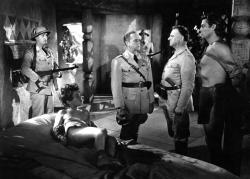 Boy and Tarzan held captive by Nazis in Tarzan Triumphs.

Tarzan Triumphs was the seventh movie in the famous Johnny Weissmuller Tarzan series of the 1930s and 40s. After Tarzan’s New York Adventure the year before, MGM mistakenly figured they had wrung every drop of cash out of the franchise. They sold the rights to producer Sol Lesser who took the series to RKO. This was the first movie without Maureen O’Sullivan as Jane as she was an MGM contract player. Leo the Lion did generously throw Cheetah into the bargain though.

The movie opens with Boy meeting a white jungle princess from a “lost” city. They are both soon dangling from the side of a cliff and need rescuing by Tarzan. Jane’s absence is explained in a letter Boy reads to Tarzan. She is back in London caring for her sick mother.

As this was 1943 the winds of WWII soon blow through Tarzan’s tranquil jungle home when Nazis invade this nearby hidden jungle city to exploit its natural resources. Tarzan is at first reluctant to fight the Nazis. He has an isolationist mentality. Boy tries to convince Tarzan to fight by coaxing Zandra (the jungle princess) to put on Jane’s bathing suit and swim and flirt with Tarzan. All to no avail, however, as Tarzan staunchly refuses to get involved.

When Boy is abducted by the Nazis everything changes and Tarzan delivers one of his most iconic lines, “Nazis take Boy. Now Tarzan make war!” Soon the Nazi body count is on the rise.

Even before Tarzan decides to make war several Nazis are killed crossing a stream full of Piranha and one gets pushed off a cliff by Boy’s pet baby elephant. The action really kicks into gear once Tarzan enters the lost city to rescue Boy.  Boy and Cheetah even get in on the killing.  Boy shoots a Nazi with a pistol and Cheetah picks up and fires a machine gun, also killing a Nazi.

The final scene has Cheetah speaking into a Nazi radio to German soldiers in Berlin. After he makes a series of chimp sounds the Nazis in Berlin all stand up and say “The Fuehrer.” Cut to a close-up of Cheetah in profile with his lower lip protruding. Yes, Tarzan Triumphs is pure propaganda but it is also 100% adrenaline fueled fun.