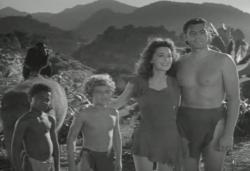 GOLD! Tarzan’s Secret Treasure is gold. Only he knows the location of a mountain made of gold on the jungle escarpment that he, Jane, Boy and Cheetah call home. This fifth MGM Tarzan movie is one of the best installments in the entire series even if they did reuse a few stock shots from previous films since their budgets were cut after the death of Irving Thalberg.

Boy sets the story in motion when, after listening to his mother’s stories about all the marvelous inventions to be found in the outside world, he decides to run away to see “civilization” for himself. Fortunately he leaves a note telling his parents his plans and that he will be back tomorrow.

With Cheetah following, he sets off through the jungle and very quickly finds himself in one dangerous adventure after another. He befriends a young African boy that he saves from a charging rhino and then accompanies the boy (Tumbo) back to his village where a plague is killing many villagers. Tumbo’s mother is among the stricken and she dies in front of her son and Boy.

The warriors of the village blame Boy for their bad Ju-Ju as he is the only white person they have ever seen. Before you know it Boy is about to be burned alive at the stake even while Tumbo pleads for his friend's life.

In the nick of time a group of white explorers show up and save Boy, followed quickly by that famous Tarzan yell. Tarzan agrees to show the white men a shortcut through the jungle since they saved Boy’s life. The newly orphaned Tumbo joins Tarzan and Boy.

In his innocence Boy tells two of the men (the villainous sounding Vandermeer and Medford) about the gold nuggets he found in a river and the rest of the story is thusly laid out. You know it will come down to Tarzan rescuing Jane and Boy from certain slow and painful death at the hands of bloodthirsty natives. The climactic river rescue provides a fast paced, high energy finale.

Barry Fitzgerald of Going My Way fame plays O'Doul, a very Irish drunk (what else) inexplicably along for the expedition. In Cheetah’s funniest scene he gets drunk on some of O’Doul’s whisky and walks about humorously on his hands. O’Doul and Tarzan bond and he plays a key role in the rescue, along with Tumbo.

The character of Tumbo shows some advancement in the portrayal of the black characters in this movie series. There are still plenty of insulting stereotypes of Africans on display but at least with Tumbo a shift has begun. He is adopted by Tarzan and Jane into their family and is in nearly as many scenes as Boy (although sadly by the very next movie he is a forgotten character).

By the end of the movie you realize that Tarzan’s Secret Treasure isn’t really the gold mountain. It is his family and his private jungle paradise. 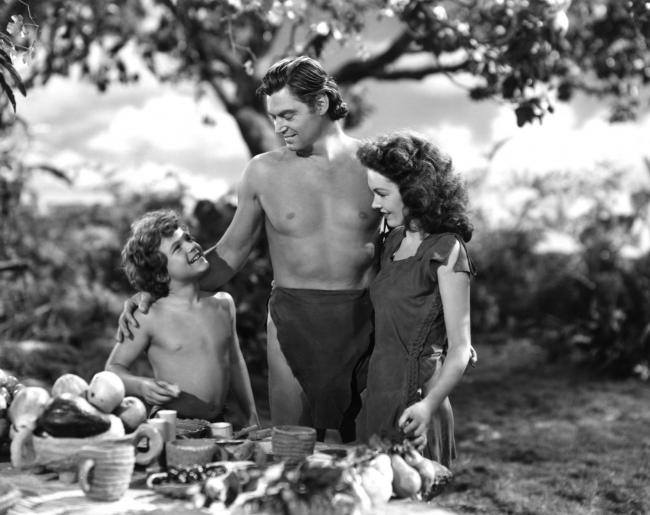 By this fifth installment, the film makers had a pattern established and Tarzan was no longer a character that we waited 15 minutes to encounter. As was the norm, a group of outsiders impede on Tarzan, Jane and Boy's life. They cause some trouble and, as Patrick wrote, put Jane and Boy in danger, leaving Tarzan to save them.

Although so many of the Tarzan films seemed to follow similar plots, they always stayed fresh, like a new episode of a favorite television show. The secret is that we like this simple, no nonsense guy. He is honorable and dearly loves his wife and son. Jane loves Tarzan so much that she gave up every other thing in her life to be with him. However, we also often see hints of her being mistrusting of the King of the Jungle. Here she questions the medicine he makes to cure an ill Boy. Speaking of their son, he easily has as much screen time as his father and truly comes into his own with this installment. Like Johnny Weissmuller, Johnny Sheffield interacts very well with the animals.

Which brings up another point. I watched this with my twenty year old son who mostly knows the CGI films of his generation. When I said that the chimpanzee, the baby elephant and the baby lion were real, he asked incredulously, "They are?" I know this will make me sound like Patrick but CGI cannot replace the real thing. My son and I both saw the The Legend of Tarzan (2016) recently, and I doubt the actors in that film ever even came close to a living breathing animal, the entire shoot.

Not only does it look better but Cheeta (the chimpanzee) is one of the most memorable characters in the movie. Patrick mentioned his intoxicated scene but he also does some light house keeping, cooking and watches over Boy. He likes to tease the elephants and always enjoys a good laugh. His high pitched giggle is contagious. He is the fourth member of Tarzan's family. One of my favorite lines is when Tarzan says of Barry Fitzgerald's character, "O'Doul good little man. Like Cheeta."

There was something else I got from viewing this film at my current age versus when I was young. Tarzan is not just fighting for his jungle and his family. He is fighting for a life he has had to work hard for and he does not want it disturbed. He is at the top of the food chain. He comes and goes when and where he likes. He has a beautiful woman who cooks for him and keeps him company at night. He has a son he adores and is proud of. All the animals, except for those pesky alligators, do his bidding. He has worked hard for the life he has and continues to every time someone from outside his domain shows up. Can we not draw an analogy from this to all husbands and fathers who have worked hard to provide a safe home for their families and sometimes feel it all threatened by bills and outsiders.

The Johnny Weissmuller Tarzan is a simple man with simple needs. He loves with an open heart and sees the beauty in the everyday things around him. Look at the scene where the man shows him a movie with a train and brags that it goes fast. Tarzan asks, "Why go fast." The man says to save time. Tarzan asks, "Save time for what?" The man decides to give up. Tarzan has problems with deadly hunters, natives and animals but not a schedule.