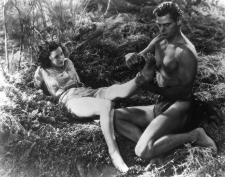 Tarzan and Jane prepare for some hot monkey loving in Tarzan the Ape Man.

The Johnny Weissmuller Tarzan movies are probably the most famous of all the different versions that have been made of the famous jungle dweller. 1932's Tarzan the Ape Man is the film in which Olympic Gold Medal Winner Weissmuller made his debut and surprisingly enough it still holds up pretty well after nearly 80 years.

Despite this being the first of 12 Tarzan movies for Weissmuller, Tarzan's origin is never explained in it. In fact, the plot bears very little resemblance to the Edgar Rice Borroughs' novel from which it gets its title. Unlike the novels, where Tarzan is basically a super-human genius, this Tarzan is strong, but not too bright. Apparently the filmmaker's were banking on audiences either already knowing or not caring just why Tarzan was living in the jungle with apes.

The story begins with Jane Parker visiting her father in Africa where he and his partner Harry are searching the jungle for the elephant's burial ground where they hope to make a fortune from all of the ivory. Jane joins them on their quest and they soon find themselves beset by wild animals, violent natives; both large and small, and a mysterious ape man who is smitten by Jane.

Not everything about this movie holds up well. There are some early scenes of rear projection that are really bad and the men in ape costumes are just silly. The overt racism seems incredibly dated and a little shocking now. Jane's father whips the native bearers and when he tells Jane that Tarzan has no feelings, she replies, “But he's White!” And the midgets painted up to look black are just unintentionally funny. There are also a couple of awkwardly inappropriate moments between Jane and her father near the beginning of the film.

Despite the many dated aspects this is still an enjoyable movie. When Tarzan wrestles the lion for instance it actually looks quite genuine. And despite being able to see the trapeze a few times, when Tarzan is whipping himself through the jungle, it still looks good.

One aspect of the film that I'd never noticed before, not having seen it since I was a boy, is the sexual chemistry between Tarzan and Jane. For one thing, Maureen O'Sullivan was a hottie in her day and she shows herself off a few times in this pre-code film. When Tarzan drags her off to his nest and they're wrestling around, it's pretty easy to see Tarzan didn't kidnap her to make small talk. They share another moment in the river with Jane in a torn up dress and Tarzan massaging her foot.

Overall this is a fun movie with even the dated, poorly filmed scenes merely increasing the enjoyment rather than damaging it. It's easy to see why a franchise was born from it. With Hollywood's penchant for remakes and franchises I'm only surprised no one has seriously tried to revive this one in over twenty years. 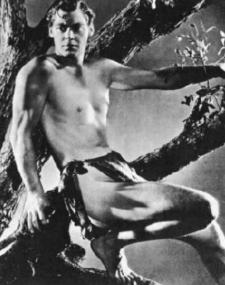 When we were kids, they showed classic movie series on television. I recall watching the Andy Hardy movies and Harold Lloyd silents on weekends. My favorite though, were always the Johnny Weismuller Tarzan films. Each week, Weissmuller would have adventures in the jungle with Jane, and later with boy, their son.

Tarzan the Ape Man tells more of Jane’s story than Tarzan’s. It is twenty three minutes into the movie before you first hear Tarzan’s yell. It is another ten minutes before you actually see him.There is still plenty of action though. The fight scenes with the animals are quite realistic.

Tarzan, however, is more like a comic book character than a man who was raised by apes. He lives in the jungle and sleeps in a tree house of twigs.He barely speaks, since there were no humans around for him to learn from. His best friend is a chimpanzee. However, he is smooth shaven; face and chest. Where did he get the knife he kills animals with? And why wear a loin cloth at all? It is not as if the gorillas would have been offended.

As a kid I never picked up on the sexual chemistry between Jane and Tarzan but it is all too obvious to an adult. In one scene, he roughly grabs Jane and pulls her into his tree house. He is lying down holding her close, while she screams in protest. He does the gentlemanly thing of sleeping outside the nest, but you know that was not his first choice.

The chimpanzee, Cheetah, is always around to yell, or do something, like throw Jane’s hat out of the tree. Tarzan yells back at him or pushes him away. Weissmuller seemed very comfortable around him. For being just an animal, Cheetah was quite an entertaining character. I liked him as a kid, and I still like him now. 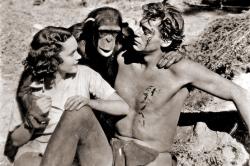 Wow, talk about memories! More than thirty years have passed since I last watched this movie. Tarzan the Ape Man transported me back to those carefree Saturday afternoons in front of the black & white television set during the 1970s. I remembered many of the scenes. Tarzan’s knife fight with the lioness being one that stood out for me as a child and (as both Scott and Eric mentioned) holds up well even today.

Jane’s role is more prominent than I would have guessed. But then as a child I cared only about Tarzan and Cheetah. The sexual chemistry is there all right. Jane falls in love so fast and hard that she happily gives up the comforts of civilization to live with a man that cannot put a simple sentence together. Thank god he somehow has impeccable grooming.

Director One Take Woody recycled footage from his 1931 movie Trader Horn. These are the rear projection scenes near the beginning of the movie that bugged you Scott. I agree that for the most part the effects hold up well. The entire movie was shot in California but it is easy to believe it is taking place in darkest Africa.

The overt racism on display is sometimes shocking but in my opinion serves as a useful reminder of how far we have come as a society. For this same reason I disagree wholeheartedly with the current trend of censoring the novel "The Adventures of Huckleberry Finn". Substituting “slave” for “nigger” changes the impact of the story drastically and gives the offensive word far more power than it deserves to have.

Johnny Weissmuller was the perfect ape man. Not only was he a great athlete (check out the scene where he swims faster than Jane can run) but he looked amazing in that loin cloth as well. With nearly his entire butt hanging out, this is as close to a naked man as you will see in any Hollywood movie made before the 1960s. As incongruous as the idea now seems, MGM initially thought to cast a young Clark Gable as the jungle swinger but ultimately decided he was too unknown.

Eric, I agree about Cheetah. He was my favorite character as a kid and I still think he steals the movie. He gives arguably the best performance, notice the way he stays in character and limps in the last shot. I have to mention C. Aubrey Smith. He was the wonderful character actor cast as Jane’s big game hunting father. His looks were perfect for the part of a British explorer off on safari in Africa. Oh and that famous Tarzan yell was created by playing a normal call backwards. Every time he let loose with it I thought of Carol Burnett’s version and how audience members always asked her to do it on her show.