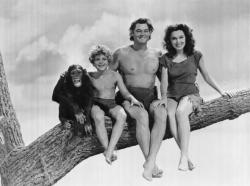 Tarzan Finds a Son! was the fourth in MGM’s series about the famous jungle swinger. It was released in that greatest of all Hollywood years, 1939. As the title suggests Tarzan and Jane raise an infant son they find (or rather Cheetah finds) at the site of the plane crash that killed both his parents. The story skips ahead in time five years after a brief scene showing Tarzan and Jane naming their new baby “Boy”.

As in the previous three movies the dramatic tension arrives in the form of outsiders from civilization intruding on their jungle idyll. This time in the form of Boy’s relatives come in search of his birth parents. You see Boy is the sole remaining heir to the Greystoke fortune (in Edgar Rice Burroughs’ novels Tarzan was the Greystoke heir). Of course these outsiders quickly discover Boy is really the lost heir and begin their nefarious plans.

In the movies’ funniest scene Tarzan, Boy and Cheetah share an inside joke at the expense of these newcomers from the outside world. At breakfast, while Jane fries an ostrich egg in the other room, the three of them whisper in each other’s ears and then crack-up laughing at their guests.

Jane is later hoodwinked into believing his relatives actually want to take Boy back to London to be educated, so she traps Tarzan at the bottom of a waterfall grotto, knowing he would never otherwise agree to let Boy go. This all leads to an action packed climax involving savage natives, Boy running to free Tarzan, chimps riding on elephants and Jane suffering a near fatal spear wound.

7-year-old Johnny Sheffield steals the movie as Boy. He matches Johnny Weissmuller swimming stroke for swimming stroke and vine swing for vine swing. He even does a miniature Tarzan yell whenever he finds himself in danger, which is quite often if you can believe it. In one scene he gets caught in a giant spider web. He later outruns a lion and swims faster than a crocodile. He would appear in all but the final Weissmuller Tarzan picture. John Sheffield died in October, 2010 at the age of 79.

Maureen O’Sullivan was pregnant in real life and intended this to be her last outing as Jane Parker. She originally died at the end but the scene was re-shot after preview audiences reacted with outrage. She would appear in two more movies as Jane before leaving the jungle for good. Weissmuller would keep on playing his most famous role throughout the 1940s bringing his final Tarzan movie tally to an even dozen.

Although Tarzan and Jane clearly had a very satisfying physical relationship they were never legally wed. And so Tarzan had to find a son. As a kid I wanted to be Boy. As played by the young John Sheffield he seemed to be having so much fun. This just might be my favorite Tarzan movie. 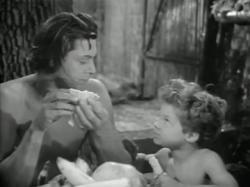 Johnny Weissmuller and Johnny Sheffield as Tarzan and Boy.

Having just watched Tarzan and His Mate, I was struck by the huge change in tone. Gone is the sexual heat between Tarzan and Jane. It is replaced with the wholesomeness of a family being threatened by outside forces.  Whereas Tarzan had never appeared in his films until the twenty minute mark, he appears here after only eight minutes.  The saddest difference is that Jane has tradeded her jungle bikini in for a conservative dress, suitable for a mother.  It also helps to hide her baby bulge.

The character of Boy creates a different dynamic for Tarzan.  We always understood that Tarzan loved Jane and she him, and that they share some passionate feelings. Tarzan and Boy share that unconditional love between a father and a son. Jane is his lover and Cheetah his animal friend/pet, but Boy is Tarzan's first and only true friend.

The scene Patrick mentioned of the private joke shared between Tarzan, Boy and Cheetah is a favorite of mine. Cheetah's laugh is hysterical.  I also liked when the paternally clueless Tarzan first takes a crying baby Boy to his tree house. To get the infant Boy to quiet down he decides to feed him by handing him a a huge leg of cooked animal meat. Boy has no clue what to do with it. Good thing for Boy, Jane was around to know what to do.

I was most shocked, and disappointed, when Jane betrays Tarzan.  It shows that although she loves him, she does look down on him and their lifestyle.  Sure, she has learned to see the beauty in their life style but she was very easily seduced into betraying the man who has saved her life countless times. Tarzan has such an open and pure heart that her actions seem all the more hurtful.  Luckily for her, Tarzan's heart also knows forgiveness. 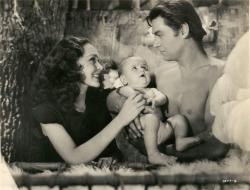 Three years had elapsed since the last MGM Tarzan film and the studio, feeling that the franchise had run its course, let their film rights expire. When another production company picked them up and made their own film, which flopped because of public outcry at seeing another actor in Tarzan's loincloth, MGM decided maybe there was life left in the jungle after all and so bought back the rights.

After the disappointing Tarzan Escapes, I was relieved to see a return to form with this installment. Perhaps the filmmakers simply needed that time away from the series to refresh their creative juices. Tarzan and Jane are still living like the Swiss Family Robinson in their gadget ridden home and somehow they've both managed to find a good body waxer, but the script is tauter and the tension more real than in the previous film.

At first I was ready to simply blame the censors for not allowing Jane to get pregnant since technically her and Tarzan weren't married, but while that may have been the initial reason, it's Boy not being their biological son that gets the plot going. This also gives the writers an excuse to bring in the Greystoke portion of the Tarzan legend, which was never mentioned before. In fact, in the Weissmuller series Tarzan's origin is never explored.

Patrick, Cheetah laughing over the joke might be the most intentionally funny scene, but there are a few unintentionally funny ones as well. The ones of those I laughed hardest at were when Tarzan is given superhero powers. To save Boy from going over a waterfall he is shown swimming at super speed by speeding up the film. Later, he pole vaults over the wall of the native tribe's village in an equally implausible manner and finally, while doing battle with the natives he picks one of them up and throws him, with obvious ropes being used to whisk the native away. Somehow though, these little filming foibles add to the movie's charm rather than detract from it. It's all done in such a spirit of adventurous fun.

I too was shocked at Jane's betrayal. By not having her die at the end of the film, the producers really screwed up the dramatic dynamic. If they wanted her to live they should have reshot the scene where Jane traps Tarzan in the pit. They could easily have made it so Boy's cousins sneak up behind her and cut the vine so Tarzan can't escape. Her death was her punishment for her betrayal and the means of her redemption. If you remove the death--especially in the ha-ha, just kidding, I'm fine way that's in the finished film--then you have to remove the betrayal. It's the biggest blemish on an otherwise very enjoyable film.