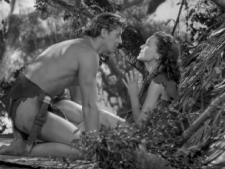 Tarzan Escapes starts in the same as the previous films. It takes twenty minutes for him to show up. It even reuses a scene from Tarzan the Ape Man, when Tarzan kills a Gnu. This installment though carries some genuine emotion.

Jane’s cousins Eric and Rita hire a trapper, Captain Fry, to help them find Jane. They need her to come back to England to settle a matter of an inheritance. He agrees, with secret plans of capturing Tarzan to take him back to England.

This installment demonstrates Tarzan’s personality. He is direct and rough with women. In one scene he drops Jane after having her in the wheel barrel position. When he first sees Rita sleeping, he grabs her by the hair and pulls her up so he can take a look at her.

He knows nothing of money. He does not understand why Jane must go back for something that buys food and clothes. At the dinner table he points to Eric’s shirt and says, “Clothes.” To him they have what they need.

Most importantly is Tarzan’s relationship to Jane. He is upset when he finds out she is willing to go back to England. Just before leaving, she and Tarzan have a romantic swim and sex. Considering that he knows about 12 words, their relationship is based almost entirely on physical satisfaction. When she leaves, a heart broken Tarzan destroys part of their home.

As with the earlier films, Tarzan Escapes is horribly racist. Captain Fry whips some Africans before being stopped by Rita. In a scene that seems appropriate for Blazing Saddles, two Africans fall off a cliff to their death. Captain Fry manages to save the crate, they were carrying, before it goes over as well, “That was close.” he says of the crate.

This movie has just as much action as the previous films. Tarzan fights an alligator after saving a baby deer.   A tribe of Africans capture Captain Fry’s group. They tie one of his men up to two trees, and pull his body apart. Of course they do not actually show it, but you can tell it is what happened. 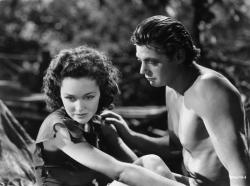 Maureen O'Sullivan and Johnny Weissmuller as Jane and Tarzan.

This third installment in the incredibly popular MGM Tarzan movies was the first made and released after the strict enforcement of the Hays Code began in the summer of 1934. Thus this time around Tarzan and Jane’s romantic swim together finds them both fully covered. Jane’s animal skin dress is more modest and Tarzan’s loincloth slightly bigger as well.

Still, as Eric mentioned, it is clearly intimated that they do the wild thing during the scene where they say goodbye before Jane is to set off for civilization. This is quite shocking for its day when you stop to consider the fact that at no point in either of the previous movies were Tarzan and Jane shown getting married.

The formula was clearly working with audiences so why mess with success. These movies always begin with some new character(s) entering the jungle to search for Jane and/or Tarzan. We always hear Tarzan’s yell several minutes before he makes his first appearance. Richard Thorpe uses a clever tracking shot that has the camera slowly pulling away from Captain Fry’s campsite. The camera moves under a large branch on a tree revealing Tarzan standing on the branch quietly observing the campsite.

The relationship between Tarzan and Jane gets more developed. They are clearly soul mates even with the limited verbal communication between them. Cheetah is back again causing a bit of mischief as usual. It is Cheetah’s fault that the baby deer nearly winds up as alligator food.

The last thirty minutes are pretty much nonstop action as Tarzan must escape from a cage (hence the title) with assistance from a couple of elephants, and save Jane and her cousins from evil natives. The villainous Captain Fry gets his comeuppance in a satisfyingly gruesome manner.

As Eric mentioned there is some genuine emotion on display. Although Johnny Weissmuller was no Laurence Olivier he does a decent job of conveying his sorrow at being separated from his love. The ending will leave you with a smile and a desire for more adventures with Tarzan, Jane and Cheetah and in the next movie they are joined by Boy. 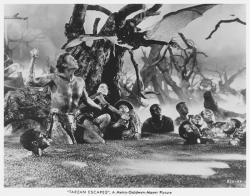 A still from the infamous and missing giant vampire bat scene from Tarzan Escapes.

The tagline for this installment in the popular Tarzan series proudly states that it took two years to produce, but that's just spin. Originally finished in 1935, the studio was reportedly so disappointed in the finished product that they sent it back to be remade with a brand new director, crew and even a casting change.

The alterations by new director Richard Thorpe included the cutting of a scene where Tarzan fights a giant vampire bat in the swamp, reportedly because test audiences found it too intense. To save money on the reshoots, several scenes were taken from the two earlier Tarzan films as well as other films such as 1931's Trader Horn.  For all their meddling, I can't say I'm very impressed with the finished product as this movie is a big step down from the first two.

I agree with both of you that despite the censor's best efforts and the two leads new fuller cut designer outfits--courtesy of the House of Hays fashion line--Tarzan and Jane do still share some sexual chemistry. There's no doubt at all that when Jane gives up her flower as the camera pans away from them that she's really giving up her flower. And c'mon, we all know what Tarzan was thinking when he kidnaps Rita and brings her back to the nest. Even he can count up to threesome. How disappointed he must have been to find out she and Jane were cousins.

Along with the new outfits, the couple is given a new living arrangement that is downright silly. Their new jungle home with all of its gadgets looks like it's straight out of Better Homes and Jungle. The minute the elephant operated elevator shows up, this series officially jumps the shark.

The plot is paper thin with moments of silliness. Tarzan would never believe that Jane had betrayed him. He already didn't like Captain Fry and all of sudden he trusts him over Jane? And even if, by some stretch of the imagination, he actually did trust him, I still don't believe he would just walk into that cage to be taken prisoner. This is only matched in silliness by how he eventually escapes from that same cage.

Putting aside the movie's many weaknesses, there are still some things to enjoy. Weissmuller and O'Sullivan are great together. The effects are cheesy, but there's a real sense of adventure. John Buckler as Captain Fry plays a truly vile villain and Herbert Mundin provides some nice comic relief as the long suffering Rawlins. Together, these elements make the movie enjoyable, but can't quite cover up its flaws.

I was never bored while watching Tarzan Escapes because it moves so fast, but it really was a missed opportunity to continue on the series in as high a quality fashion as it had started.