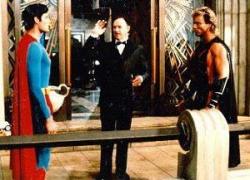 Christopher Reeve, Gene Hackman and Mark Pillow in Superman: The Quest for Peace

Although the second Superman movie made some major mistakes in Superman lore, it was not until the third movie that the series completely went off the rail. After four years away from the series, Christopher Reeve agreed to come back for one last go in the tights and cape if Golan and Globus financed the movie, Street Smart. The story was his, but Superman IV: The Quest for Peace was doomed before it was ever released.

In 1987, the Cold War was still going on and in response Superman decides to end the threat of nuclear war once and for all by collecting every nuclear weapon and sending them hurling into the sun. That in and of itself is ripe for a political thriller. However, instead of having renegade governments trying to hide nuclear warheads from Superman, the script has a new owner of the Daily Planet flirting with Clark. What could have been a serious film is played for laughs.

Adding to the nonsense is Lex Luther who makes a supervillian out of Superman's DNA called Nuclear Man. Gone are his initial stupid sidekicks and replaced by Jon Cryer's "dude." Lex Luther can never be taken seriously when he himself does not take himself seriously.

Originally the film had a decent budget and was slated to run longer. At first there were two Nuclear Men, one made from the first one that fails. The money ran out quickly forcing producers Golan and Globus to cut serious corners. They cut out plenty of planned scenes, even some that were already filmed. In the released film, Nuclear Man searches for Lacy Warfield for no apparent reason. In scenes cut from the released version the first Nuclear Man met and fell for her, causing the new one to still have a memory of her.

I am not sure what the film would have looked like had it an unlimited budget, but what was released is a disaster. It steals an old plot device from the second film when Superman once again uses his magic forget me kiss on Lois after letting her know who he really is. He has other fantastic new powers, such as when he rebuilds a damaged Great Wall of China with his rebuild a wall vision.

Watching this film today it is interesting to note Jon Cryer, who is now known as Alan on Two and a Half Men. He and Luther add some decent levity to the proceedings. Hackman says to him, "Lenny, I've always considered you the Dutch Elm disease in my family tree." At one point Lenny says to Supes, " The Dude of Steel! Boy are you gonna get it!" When stealing one of Superman's hairs, Lex Luthor asks, "You know what I can do with a single strand of Superman's hair?" Lenny answers, "You can make a toupee that flies."

Those lines are worth a chuckle but are odd being in the same film with scenes where Superman says to Lex, "You'd risk world wide nuclear war for your own personal financial gain?" and Luthor responds, "Nobody wants war. I just want to keep the threat alive." Superman even gives this dramatic speech, "And there will be peace. There will be peace when the people of the world, want it so badly, that their governments will have no choice but to give it to them. I just wish you could all see the Earth the way that I see it. Because when you really look at it, it's just one world."

Superman IV: The Quest for Peace is a mess. It forgot that the original succeeded because the makers took it seriously. Humor has a place in all films but it cannot be so prevalent that it changes the entire tone of the film. The writers were clearly not up to the task of the subject matter. By the end of the film nothing has changed and nothing was accomplished. While being dropped back off in prison, Lex asks Superman, "Is the world gonna be vaporized?" Superman replies, "No. It's the same as it's always been, Luthor. On the brink. With good fighting evil. See you in twenty." Why did they even bother to make this film? 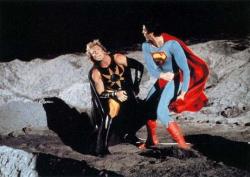 Mark Pillow and Christopher Reeve in Superman IV: The Quest for Peace.

While the father and son producing team of Ilya and Alexander Salkind--with the help of director Richard Lester--screwed up Superman II and Superman III, this movie goes to show that they're not the only ones capable of such a feat. In 1986, the duo sold the Superman film rights to the Israeli producing partners of Golan and Globus of Cannon films. While they started with ambitious plans for the film, financial difficulties forced them to slash its budget by more than half, thus virtually dooming it from the start. The first Superman film, nearly a decade previously, had a budget of $55 million, while this one was reduced to $17 million.

Christopher Reeve, who had claimed to be done with the part 4 years earlier, was drawn back to the franchise by the promise of Golan and Globus producing the movie Eric mentioned and by being able to contribute the initial story idea for this film. Donning the cape and tights one more time would become something he would regret, saying later that the film was, "...a catastrophe from start to finish. That failure was a huge blow to my career." In a 2012 interview, Jon Cryer claimed that Cannon ran out of money during the production and ultimately released an unfinished movie.

Like Eric, I thought the story's premise was an interesting one. Superman has the ability to rid the planet of nuclear weapons, but by doing so he crosses the boundary of sovereignty and free will. His motivation is a good one, but should one man, no matter how super, be allowed to dictate to the entire planet? By taking this action, Superman has set himself above humanity. Would countries really applaud his behavior? Many countries would, but the superpowers would surely have protested. Superman, no matter his claims of world citizenship, is based in the USA and is an American icon--just look at the scene on the moon where he stands back up the American flag--and so wouldn't the US government expect preferential treatment and expect to be allowed to keep their missiles? And wouldn't the Russian government suspect this, whether it was true or not? While these questions are interesting, none of them are ever answered, or even discussed. The whole matter is glossed over quickly and seems like just an excuse for getting a nuclear missile into the sun so Luthor can create his Nuclear Man.

Eric mentioned that in the original script there were two Nuclear Men, which sounds like two too many if the first was intended to be anything like the second. Mark Pillow, who played the Nuclear Man, was a former Chippendale dancer and this is the one and only movie in which he appears. While he was definitely in good shape, his performance is horrible. His costume, hair, and long, electrically charged fingernails make him look extremely campy.

The script is lazy and filled with several scenes that make no sense. Eric mentioned the silly "build-a-wall-o-vision" that Superman now possesses, but how about Mariel Hemingway's character's ability to survive and breathe in space when the Nuclear Man drags her out there? And why, when Superman needs to talk to Lois does he walk with her off the side of a building without warning, while dressed as Clark Kent? Not only is it one hell of a scare to give someone, he also selfishly reveals to her who he really is, knowing that he'll be able to erase her memory again with his magic kiss. Why doesn't he just fly to her dressed as Superman before talking to her? It's as if Superman really does look at humans as his playthings. Here's the woman he loves more than any other and he plays with her memories because he's too lazy to change clothes before asking for her advice.

It's not just the writing that's awful, but most of the performances as well. Even in the weakest moments in the previous films, Christopher Reeve seemed to be struggling to elevate the material, but not so here. He comes across as bored and maybe even a little embarrassed. Hackman and Kidder, who both returned to the franchise once the Salkinds were no longer involved, seem to be phoning things in and Mariel Hemingway was deservedly nominated for a Razzie as worst supporting actress. Cryer, intended as comedy relief, provides more groans than laughs as the supremely 1980s' Lenny with his Valley Guy accent.

The biggest victim of the budget cuts are the special effects. The one thing this series always prided itself on was that "You will believe a man can fly.", but here you'll only believe that a man can be suspended in front of a green screen as it's obvious that far too often that's exactly what is happening. And the battles between Superman and Nuclear Man are about as impressive as a cartoon.

While most sequels in any film series tend to demonstrate the laws of diminishing returns, this series fared worse than most in that regard as each subsequent film was drastically worse than the one before. This one was so bad that it effectively killed the Superman franchise for nearly 20 years. It would be 19 years before we'd see Superman on the big screen again, and another 7 years after that until there would be a Superman movie deemed a success.

Mariel Hemingway and Christopher Reeve in Superman IV: The Quest for Peace.

The one surprising thing about the four Superman movies of the 1970s/80s, especially when you compare them to the four Tim Burton/Joel Schumacher Batman movies that would become the next big cinematic superhero franchise in the 1980s/90s, is the fact that they were able to keep basically the same cast together for all four movies. Michael Keaton was replaceable whereas Christopher Reeve was not. And we also have Margot Kidder, Jackie Cooper and Marc McClure appearing in all four Superman movies, and Gene Hackman appearing in three of the four.

I suppose there's the germ of an idea that might have worked with the nuclear warhead angle but as my brothers both wrote it goes absolutely nowhere. Once the budget was slashed so drastically they should have just scrapped the entire production rather than release this shoddy unfinished picture that did nothing but tarnish the reputations of all involved.

The only possible reason for watching this movie today is to see Christopher Reeve don those iconic tights and cape one last time. He may seem bored at times, and really – who can blame him? – yet he still manages to inhabit the role with practiced ease. You can have a legitimate debate over who your favorite actor to play Batman is, but for an entire generation there will only ever be one Superman.

Superman IV: The Quest for Peace fails on pretty much every level. The script is terrible, the special effects are a joke, and the cast doesn't give a damn. As mentioned above, each of the subsequent sequels in the series was noticeably worse than its predecessor. Superman: The Movie is, for my money, arguably the greatest superhero picture ever made. Superman II and Superman III are much sillier and not in the same league with the original, but they both still offer some entertainment value if you don't expect too much. The same cannot be said of Superman IV. The Quest for Peace is one big bomb.