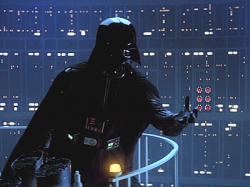 Darth Vader reveals that he is Luke's father in Star Wars: Episode V The Empire Strikes Back.

At the time of this writing there have been four movies set in the Star Wars universe. Of those four, three are children's movies, and one, the best of them all, is an adult film. I'm speaking of course; of The Empire Strikes Back, the second film in the original trilogy.

Gone are the campy clothes, the dime novel dialogue, and the cliché-ridden plot. Instead, we are given a more complex story, with adult figures, more mystery, and heightened tension. And all without losing any of the action, amazing special effects, and universal themes of good versus evil that were so prevalent in the original.

Much of the credit, if not all, must be given to the film's director, Irvin Kershner. With Lucas taking a behind the scenes position on this film, unlike his active direction on Episode IV, Kershner, an experienced film director, is able to bring his talent of emphasizing characters to the fore front. The combination of Lucas's imagination and Kershner's direction, are what make this the best of the films.

The story takes up shortly after the first left off. The rebels are in hiding after their victory at the Battle of Yavin. Darth Vader, who is at his most evil in this film, is seeking them out. The Emperor and Vader both realize the threat that Luke Skywalker is to them and their Galactic Empire. They know they must bring him over to their side, or kill him.

After an amazing opening battle on the ice planet, Hoth, the rebels are on the run once again. Han, Leia, Chewbacca, and C3-PO spend most of the film trying to evade the Galactic Fleet, while trying to repair the Millennium Falcon. Their scenes aboard the ship feature some of the best special effects in the movie, while also providing the only moments of romantic tension yet to appear in a Star Wars film. Meanwhile, Luke and R2-D2 head for the planet of Dagobah where, according to a vision sent to Luke by his old Jedi Master, Obi-Wan Kenobi, Luke will meet and be trained by the great Yoda, the powerful Jedi who trained Obi-Wan.

Luke meets Yoda, who is not what Luke or we the audience were expecting, and he reluctantly agrees to train him. Their scenes provide real characterization, and Luke begins his transition from whiny youth to powerful Jedi. These are also the darkest scenes anywhere in the series. The miniature muppet Yoda, actually providing real dread with his portentous announcements spoken in his backward English.

The film moves to its climax on the cloud planet, where Luke and Vader meet for the first time and the horrifying secret regarding their relationship is revealed. The only moment of true shock from the series. And the fact that the film ends on a cliffhanger also comes as something as a shock.

The cast are all at their best here. Harrison Ford is his usual cocky self as Han Solo. This movie provides him with his best lines. His reply of, "I know" to Leia's "I love you", is now classic. There is also some real chemistry between him and Carrie Fisher, something dreadfully lacking from The Return of the Jedi. Mark Hamill gives his best performance as Luke, moving beyond the annoying personality of the first film, as I said. The rest of cast also gives very good performances. This is probably a result of the script and Kershner's character heavy direction. Although the least successful financially of all the Star Wars movies, The Empire Strikes Back stands out as the best of all the films. 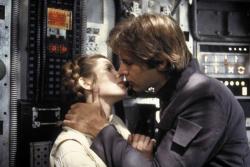 What makes the Empire Strikes Back such a great movie and arguably the best in the series, are the incredibly creative and vivid settings. From the opening on the desolate ice planet Hoth with its arctic-like weather and ferocious snow creature, to Dagobah; tropical and mysterious swamp planet, and finally to its riveting conclusion among the clouds, this movie brilliantly evokes these very different worlds. The main appeal of the series, in my opinion has always been its incredible ability to take us to another universe. By that measure Empire and Phantom Menace are the most successful; however when you factor in, as Scott mentioned, the fact that Empire really seems to be aimed at a more adult audience it stands alone as the best Star Wars film to date.

Another unique aspect of The Empire Strikes Back, which sets it apart from the rest, is that though we all like to cheer for the good guys it is sometimes refreshingly real to have the bad guys come out on top as they do in this movie. And who can forget the first time they heard this line? "Luke, I am your father." Great character development, with a stunning cliffhanger ending.

The original Star Wars movie stands alone as the greatest science fiction classic of all time, however it took The Empire Strikes Back to turn this into an ongoing saga. There must have been an inordinate amount of pressure to be as successful with this second movie. At any rate they accomplished their goals, including the introduction of Yoda, perhaps the only truly great character in the series that was not in the first film. 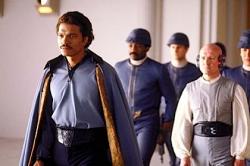 First I must point out where I disagree with my brothers. First and foremost Star Wars is a better film than Empire. Star Wars is a solid film that stands by itself. Without Star Wars and Return Of The Jedi book ending it, Empire would not make any sense.

I do agree with them that this is by far the most adult movie in the series. Scott pointed out the shocking scene in which Darth Vader reveals Luke's heritage. However, that is just one of several surprising moments this movie has. Remember how shocked you were when you first saw who Lando wanted Han, Leia and Chewbacca to dine with. What about the scene where you find out that the Millennium Falcon is not hiding in just a cave? The battle on Hoth and the light saber duel are two very good tense moments.

Now surprisingly enough, this film, with all the suspense working, also has the best humor in the whole series. Princess Leia to a frustrated Han Solo; "Would it help if I got out and pushed?" C3PO to a smoking R2; "How am I supposed to know the difference between a power coupling and a communication outlet? I am only a translator!"

I also concur with Scott that the love story between Han and Leia is at its hottest. They bicker with each other, then kiss and then are tragically separated. Its one area in the series that I wish had been further explored.

This is the best sequel ever made. Godfather 2 would be the best but Brando isn't in it and Pacino's character changes to drastically from the first.