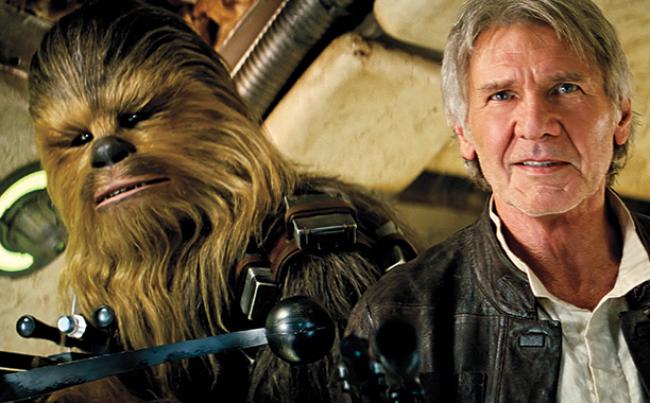 With the bar set so low by the prequel trilogy, this movie really only had to be adequate to be considered an improvement. Happily, director J.J. Abrams, writer Lawrence Kasdan, and the rest of the crew and cast have far exceeded that remit and have instead produced a phenomenally entertaining film that is a worthy successor to the original movies. They manage this feat by returning to the spirit of the first film and including several members of the original cast. In fact, they hew so close to the original film's plot that it's nearly a remake. Given the need to get this new trilogy off to a strong start, this playing it safe is more than understandable.

The story picks up 30 years after the end of Return of the Jedi. Details of the intervening years are kept to a minimum. Politics are kept firmly in the background. There's no scenes of arguing over trade routes in the Senate here, as there were in the prequel trilogy. The bad guys are the remains of the Empire, known as the First Order, while the good guys are an underground army known as the Resistance. One of our heroes is a young person, seemingly an orphan, living on a desert planet, with an untapped aptitude for the force. Only this time, it's a she in the person of Rey. She escapes from the planet with the help of a former stormtrooper, aboard a very familiar spaceship. Together, the two of them meet new friends, old faces, and make some new enemies, on the way to a climactic battle with the the forces of the First Order, who have developed a weapon capable of destroying planets.

While one of the film's big selling points is the return of original stars Carrie Fisher, Mark Hamill, and especially Harrison Ford, one of its biggest accomplishments is successfully introducing a new generation of characters. On the good side, along with Rey, we have Finn, the former stormtrooper, and pilot Poe Dameron (played by an underused Oscar Isaac). Facing off against them is the young Sith, Kylo Ren (Adam Driver), who has been heavily featured in the trailers with his triple-bladed light saber, and who nearly steals the movie with his temper tantrums. Seeing Han and Chewie in action again is fun--and the two of them play off of each other like an old married couple--and Han provides the film with its most emotional moment, but it's these new heroes who are at the heart of this new trilogy and it feels safe in their hands.

Visually, the film is everything you'd expect it to be. Abrams has mixed costumes, models, and CGI. The result is cutting edge special effects, but in a way that remains true to the look and feel of the original series.

As I said, the plot is so similar to the original Star Wars, that you could almost call it a remake. There are many, many parallels. It does feel as though Abrams and co. played it very cautiously. They were obviously desperate not to screw this up and so never stray very far from the original formula. Hopefully, as the trilogy continues, the story will become more original. The only other problem I had with the plot is a fight near the film's climax that feels as though it should have been much more one-sided, considering that one opponent has been training for years while the other has just picked up their weapon for the first time. But these are minor quibbles that do little to mar the entertainment value.

When it was announced that Disney was buying out Lucas and making a new trilogy, I was filled with mixed feelings. The original trilogy of films were such touchstones of my childhood that I was naturally excited, but the memory of the prequel trilogy had soured me on ever wanting to seeing another movie set in a galaxy far, far away. I'm extraordinarily relieved by this film. Abrams has brought the fun back to the franchise. 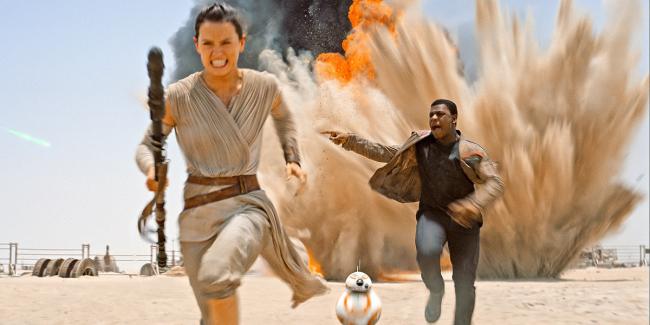 The Force Awakens is a return to form for the Stars Wars franchise. It's both a sequel to Return of the Jedi and a reboot of A New Hope. As Scott mentioned, the plot borrows heavily from that first Star Wars movie. You can either bemoan the lack of originality or exalt in all the nice little homages sprinkled throughout the story. I chose to do the latter.

Of course it helps that the new generation of characters are all quite memorable; and memorably played by Adam Driver as Kylo Ren, Daisy Ridley and Rey, and John Boyega as Finn. Of the older characters this episode belongs to Han Solo.

Despite being well into his 70s, Harrison Ford can still keep up with the kids. Anyone of a certain age will surely experience a rush of nostalgia when Han and Chewie make their entrance. Han's interactions with the new characters are the highlights of the movie. He has a buddy/buddy camaraderie with Finn that provides some comic relief. His relationship with Kylo Ren provides the most dramatic moment in any Star Wars movie.

As for the droids, this time around it is BB-8 that gets most of the screen time. He's quite lovable and will surely be one of the best selling Christmas toys this year. C-3PO,with a mysterious red arm, is as flighty as ever. R2-D2 has less to do this time around but he gets one important scene near the end.

Star Wars: The Force Awakens is the must see movie of 2015. Period. 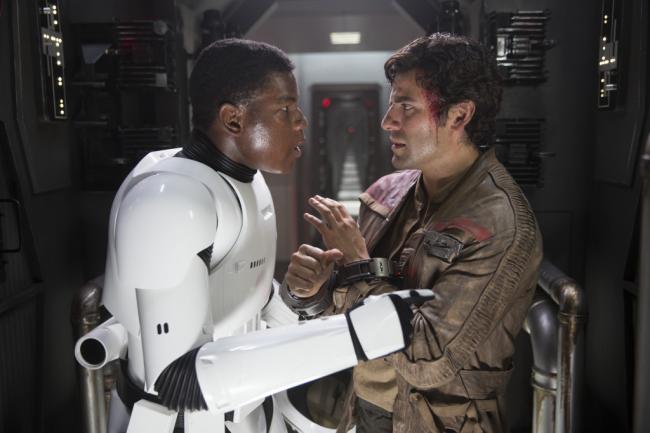 Having seen every Star Wars film in theaters, on their initial run, I was a bit pulled back by the lack of the 20th Century Fox logo and music at the start of the film. It always worked so well with the Star Wars theme music. However, once those words began to appear, and scroll up into the universe, I was transported to a long time ago in a galaxy far far away. Just reading the names Luke and Leia brought a smile to my face. Yes, I am dating myself but it was as if I was hearing from old friends who moved away so very long ago. And as Patrick wrote, I felt a rush of nostalgia, like I have never in a film felt before, when Han Solo and Chewbacca first appear on screen.

As Patrick noted, The Force Awakens is as much a reboot as it is a sequel. You can choose to see that as a weakness or a strength, but The Force Awakens is without question a fun time at the movies. It is what separates the first trilogy from the second. Also as Scott wrote, politics are left nearly completely out of it. The only time we hear about it is when we see a growing threat, just like in real life.

Much of the fun in this film and the original series is brought to us by Han Solo and Chewbacca. I never before fully realized just what an important role they play in the Star Wars movies. Luke, Leia, Kenobi and Darth Vader were all very serious characters motivated by a universal struggle. Han Solo has always been that unknown variable. He does not play by rules set by the force, the Empire or the Rebels. He was motivated by currency and then an attraction to a princess. Here we find him acting just as independently but as he grew in the original series, we see that he continued to grow and is now haunted by the past and running from it. Don't get me wrong. He is still full of wit, such as when they are on the frozen planet and a jacket wearing Han turns to a growling furry Chewbacca and says sarcastically, "Oh, you're cold?"

As much fun as it was spending time with Han Solo and Chewbacca, my son's favorite character, I was mostly delighted by the new, younger characters. The insecure Finn is the most original as he starts the film as a storm trooper, before going all "Red Badge of Courage" and joining up with Rey, She is a big question mark. Her past is purposely left vague and I was guessing how it was going to be revealed but that will have to wait for the sequel.

The best new addition is that of Poe Dameron. He is a resistance fighter pilot with the cocky charm of a smuggler. When he first meets the masked Kylo Ren, he asks nervously during an awkward silent moment, "Do I talk first or you talk first? I talk first?" Oscar Isaac has become my favorite actor this year. With his varied roles, he has proven to be a real acting talent and demonstrates here some real charm. He is clearly the younger version of Han Solo.

Now here is my problem with that. Poe works for Leia and acts like Han. Hell, looks wise, he could even pass for their son. Adam Driver, on the other hand, could pass for Elliot Gould's and Barbra Streisand's offspring but not Harrison Ford's and Carrie Fisher's. He looks nothing like either of them. Seriously, how does that mask fit over his nose? I hope Han got a DNA test done before he started making child support payments.

Okay, so that is a minor quibble and can be over looked but this next one is more of an issue for me. We learned in the other six movies that someone with the force may be able to sense things or have an inclination of how mechanics work but they must be trained before being able to use the force to any amount of efficiency. here we have a character simply come upon the ability all on their own and start doing things they were never told they could do.This person should not have been able to do what they do without a serious amount of Jedi training. Maybe it will be explained in the sequel that I am already anxiously waiting to come out.