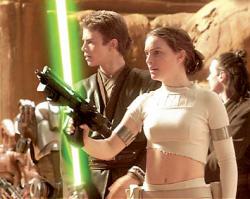 The question of the hour is can George Lucas recapture the magic of the original trilogy in this fifth installment of his legendary movie series? Since pretty much everyone agrees that, to at least some extent, Phantom Menace tarnished the luster of his epic story set long ago in a galaxy far, far away... Breathe easy, for in the humble opinion of this movie buff he has, at least partially, succeeded.

Attack of the Clones paints a broader canvas than any of the previous efforts. In addition it fully develops characters that may have seemed one-dimensional or even somewhat ludicrous in the last movie, specifically Anakin Skywalker, Padme Amidala and Obi-Wan Kenobi. All three of whom have matured into far more interesting personalities this time around. And for the record, Jar Jar Binks is back but plays a miniscule role in the events shown.

The movie opens ten years after Episode I, Princess Amidala is now an influential Senator in the Republic. When danger threatens she is sent to her home planet of Naboo accompanied by Anakin, now a young man and Jedi-apprentice to Obi-Wan, acting as her official bodyguard. Love blossoms between them in a few tender scenes that are balanced with scenes hinting at the anger that will eventually lead the future Darth Vader towards the dark side of the Force. Meanwhile Obi-Wan is on a mission to find and capture the elusive bounty hunter Jango Fett, father of the infamous Boba. I don't want to give too much away so I'll just add that this chase leads him to the discovery of the clone army and then all Hell breaks loose.

The droids are back of course and so is Yoda, who kicks butt in a crowd-pleasing light saber dual near the films climax. Also we can begin to see how the pieces of this trilogy fit in with the first one. We meet Boba Fett as a boy and also Luke Skywalker's aunt and uncle as a young couple. The special effects are improved as well. Not so much for any advancement in technology but because they are not relied on as heavily and they are much less ostentatious than in Phantom Menace.

All I can say is bring on Episode III! 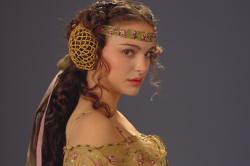 In my review of The Phantom Menace I called it an exercise in digital animation, and such it was. Utterly lacking in heart, soul, or anything to give a damn about. I therefore went to see Attack of the Clones with very low expectations in mind. I hoped that maybe my expectations were so low that I wouldn't help but be impressed by what I saw. I could not have been more wrong. Attack of the Clones is shit with a capitol SH. It's another digital cartoon with awful dialogue, weak performances, no tension (if you ever once thought that one of the characters was going to die or be hurt in this movie, than you must be under the age of ten), a convoluted storyline with plot holes wide enough to fly the Millennium Falcon through, and most of and most surprising of all, it's BORING!!!!!

Oh sure, it's not all boring, almost always there is something to look at, some digital imagery in the background to distract your attention away from the pathetic mess being acted out in front you. But the greatest special effects in the world can't distract you from these performances and this god-awful dialogue for long. Entire stretches of this movie are given over to exposition relating to the political maneuvers in the Senate and who wants what clone army, yawn-inducing but watchable. However, watching Anakin and Amidala falling in love with sad eyes, and monotone voices (which is no wonder considering what they have to say to each other), had me glancing at my watch every five minutes. Here's just a sample, "I don't like the sand. It's coarse and rough and irritating--not like you. You're soft and smooth," says Anakin to Amidala at one point. It's a good thing he's a Jedi cause he's not going to get very far with lines like that. And while I'm on the subject of these two, how come Anakin aged, but Amidala is still exactly the same age as the last movie?

As for the 'crowd-pleasing' scene of Yoda kicking butt, that Patrick mentioned, I can only say this. I didn't like it. In the same way that I didn't like the way he was entirely digital. Mark Hamill once said in an interview that during his scenes with Yoda in The Empire Strikes Back, he would sometimes forget he was a puppet. That kind of thing shows in your performance. As soon as you go digital, something is missing. Watch this or any other movie with a digital character. Watch how an actor interacts with an actor and then watch how an actor interacts with a digitized character. Huge difference. But back to Yoda's fight scene, instead of going, "Yeah!" like everyone else in the theater, all I could think was here was this beloved character being cheapened in this undignified manner just to elicit the cheap cheer in an otherwise cheerless movie.

George Lucas, unwilling to relinquish control over this universe he created, is solely to blame for this celluloid garbage. While a visionary visual genius, George Lucas is not a writer and not a director either, at least when it comes to real-live actors. Why doesn't he just go the next step and make a completely digital movie? With a cartoon, you expect cheesy dialogue and you make the drawings do anything you want. Or here's an idea, make all the characters digital and the background and sets real! That way we can skip the wooden acting, and nobody expects cartoon characters to speak realistically.

Lucas, hire a professional writer, a director who knows how to work with actors, and you get on with the basic story idea and go crazy with the special effects. Do all that and I too would say, "Bring on Episode III". Sadly, I don't see that happening. 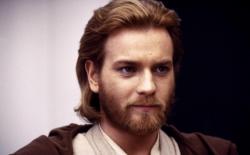 The plot of Attack Of The Clones has already been discussed so I will just get into my opinion. This is a great matinee, action flick. It could use some better direction, but I will forgive that. After all, it is a part of something bigger than itself.

Lucas's story is arcing nicely towards parts 4-6. We see Anakin has developed an attitude. We learn of plans for the Death Star. Best of all we see Yoda in action. He may be small and walk slow but he can kick butt when he wants to.

In fact the action is the high points of the movie. These are perfect scenes. The chase through the city is quite a rush. So many things are moving on the screen at once you can't possibly notice all the details.

Where the movie is not perfect is when characters are standing around talking. Moments before meeting Amidala again for the first time in 10 years, Anakin tells Obi Wan how nervous and uncomfortable he is. 2 scenes later he is spouting out all of his problems to her as if they were brother and sister who spent everyday together. Meanwhile she's packing her clothes as if she is only half listening.

At one point Amidala falls out of a speeding flying vehicle. She rolls through the sand, is helped up by a "clone" and delivers the flattest dialogue I ever heard. She gives the "clone" some command. She is not anxious or even out of breath, even though she just went through a huge fight. I am not even going to blame Natalie Portman for this scene. I am going to blame the direction.

In my opinion George Lucas puts to much time into the special effects and action scenes and not enough into the dialogue and acting. Sure, while Amidala is in the sand Anakin and Obi Wan are having a disagreement about stopping to get her. This conversation is important because it shows Anakin's personality and loyalties. However, if Senator Amidala is not worked up by all this fighting then why should the audience.

Granted, this is not an "acting" movie. But at least show these guys sweat and strain. These are supposed to be tense scenes of fighting for their lives. Instead we have Anakin and Amidala in the middle of an arena filled with hundreds if not thousands of droids trying to kill them and they take a moment to exchange cute smiles and a couple of endearing words.

This movie is definitely worth seeing but Lucas could easily hire some one else to direct the actors while he oversees the special effects.