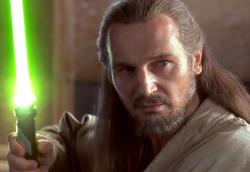 Liam Neeson in Star Wars: Episode I The Phantom Menace.

I know the great debate over Star Wars: Episode 1 has always been about the character of Jar Jar Binks. However, I think Jar Jar is only a minor distraction. It is not the big flaw in this extremely flawed movie.

George Lucas started this series with two great comic reliefs, R2-D2 and C3-PO. Their arguments and bickering were great fun to watch. Jar Jar just acts stupid. The fact that Jedi Knights choose to be allied with such an annoying character brings their prestige down a bit. The only thing I can really say in Jar Jar's defense is that my sons thought he was funny. Like the childish Ewoks, George introduced in Return of the Jedi, Jar Jar is a way of Disneyfying a movie that was never meant for pre-schoolers in the first place.

Whereas Jar Jar is annoying, he has less screen time than Anakin. The character and the actor who portrays him are misplayed. Anakin is a happy go lucky, dough eyed, baby faced "slave". He races pods better than seasoned pros, and in his spare time builds protocol droids who are fluent in over 6,000 forms of communication, and he does all this without any formal education. And hey, if he has to, he can even fly a space ship. Okay, he has the Force, but when was it ever said that the Force made you smart? The actor playing Anakin, whose name I don't even care to remember, is talentless. His expressions for happy , sad, excitement or concern are all so similar that you can never tell if he is acting or just passing gas. They should have hired an actor who was older. The scenes with the Queen looked more like a hot babysitter with a brat in tow than a budding romance. The actor should have also had a little edge. He does grow up to be Darth Vader for bloody sake.

The movie has some great moments and some real dull spots. The single best part of the entire film is the great light saber fight between the two Jedis and Darth Maul. Lucas really blew it by giving Jar Jar so much screen time and Darth Maul so little.

Lucas had the awesome job of trying to make millions of fans happy. He succeeded whenever there is action going on.  Whenever there is dialog the film either becomes dull or ridiculous.  A Jedi lets Anakin's mother stay a slave?  What in the hell is that about?  He should have saved her.  What possible law would he have broken by taking her with him?

George Lucas is an idea man, not a writer.  The entire plot involves Padme journeying from one planet to another with absolutely no results to show for it.  The gimmick of disguising her was for not.  Jar Jars people get found in an underwater city but cannot be found in a swamp?   When they discover Anakin has the force they should have taken him without dealing with a slave owner, who by definition is not worthy of a negotiation.

Star Wars: Episode I The Phantom Menace has a few truly great moments but they are unfortunately bogged down by countless scenes of yakking.  As a final complaint, who in the hell thought to cast Mr ghetto, Samuel L. Jackson in the role of a wise Jedi leader?  He is as convincing as Jake Lloyd.  Aw shit!  I remembered his name. 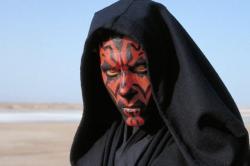 This movie is much broader in scope than the previous three movies which, of course, take place later in time. The advances in computer generated graphics over the last twenty years are simply amazing and they enable George Lucas to truly create the Star Wars universe in crazy detail. Still this cannot completely make-up for the flaws which Eric has already pointed out. Like him I can easily overlook Jar-Jar, he is not nearly as horrid as many vocal fans have claimed. Silly, yes, but does he ruin the movie, definitely not. Although the tepid script and awful performance by the kid playing Anakin almost do. Still my loyalty to the franchise and the brilliance of Lucas's imagination force me (no pun intended) to give The Phantom Menace three stars. I only hope that the next one is better. 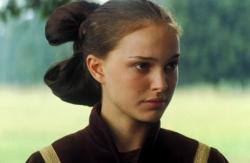 Natalie Portman in Star Wars: Episode I The Phantom Menace.

A few years ago, probably more than I care to realize, my brother Eric and I had a conversation about Science Fiction movies. We both agreed that one of the problems with a great many of these movies, is that they spend so much money on special effects that they tend to give these effects too much screen time. It's as if they went to all the trouble of creating these effects, that they want to show them off. The original Star Wars trilogy was the exception to this rule. Lucas put an incredible effort into making what were at the time, the greatest special effects ever seen on film. And then he did the rare thing of just ignoring them. They were there, but always in the background, just a part of the story, like any setting in a non-Science Fiction movie. The adventure, the story, and the characters were all more important than the effects. Which is just one of the many reasons the original trilogy is such a classic.

With Phantom Menace, Lucas seems to have forgotten this technique and it is the special effects that take center stage. And perhaps this is due to this movie being one long special effect, which is what it really is. It reminds me of a line that Ben Kenobi spoke in the original trilogy when he referred to Darth Vader, "He's more machine now than man." Well this movie is more computer generated than it is a live action film. Why build a set when you can create it on a computer? Why create an alien costume or hire an actor when all you need is a computer to draw it on and a voice to speak it's lines? Who needs your actors to give a good performance, when you can digitally alter their expressions or paste on a face from another scene? All of these things are technically amazing, but they take the heart, the humanity, out of the process. On this film, Lucas is a Frankenstein, in love with his creation.

Still, out of this digital creation, I could still have enjoyed it if only there were actors or characters strong enough to stand out against this computer enhanced backdrop. As both my brothers have mentioned, Jake Lloyd as Anakin is horrible, and the weak lines he is given to deliver, don't help either. Liam Neeson, whom I have never been a fan of, blends in so blandly as to become almost invisible. His death comes as a relief. The only actors/characters that really worked for me in the whole movie are Natalie Portman as Queen Amidala, Ian McDiarmid as Senator Palpatine, and of course the character of Darth Maul. Only these three are able to make their presence felt amid the virtual clutter that is this movie.

There are a few moments that I would deem classic in this movie, such as the final Light-Saber duel, but these moments are very few and far between. And they do not do enough to make this movie rise above anything other than an exercise in Digital Animation.