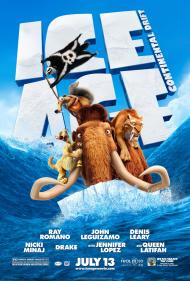 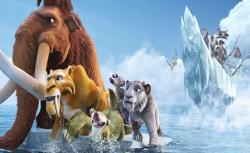 Every installment of this series has been a step down from the previous one. Ice Age: Continental Drift is the fourth in the series and it does nothing to reverse that trend. In fact, it accelerates the decline. It offers nothing to those above the age of seven.

The story opens with the movie's funniest sequence, only unfortunately it's a scene that was given away in the previews many months ago. Scrat, the nut loving squirrel, ends up at the center of the earth where he inadvertently causes the continents to drift apart. It's one of the most surreal, silly and inventive moments in the film, but as I said, it was all given away in the previews.

Following that opening, the story gets rather flat and stale. Manny, the wooly mammoth ends up on an iceberg with Diego the sabretooth tiger and Sid the sloth. Accompanying them is Sid's granny, voiced by Wanda Sykes. Manny's wife and teenage daughter traipse off with the rest of the animals to the land bridge to escape the shifting continents while Manny tries to get back to them.

Along the way Manny and his sidekicks run into a group of pirate animals lead by a monkey named Captain Gutt and a female sabre named Shira. Although there's some sound and furry fury when they meet, it doesn't really generate much in the way of humor. The shenanigans that group goes through is hilarious however, compared to the after school special that goes on back on dry land where Manny's daughter Peaches learns the value of true friends.

What little humor there is, is provided by Scrat, although even his antics are long since tired, although the finale where he finds his idea of Nirvana, at least ends the movie on a slightly higher note. The cute little creatures that help Manny and his troupe take on the pirates are also worth a few chuckles, but not as many as I hoped when they first appeared.

The animation is fine, but nothing groundbreaking or particularly impressive. Unfortunately, when I got to the theater I realized that I had inadvertently ended up at the 3-D showing of the movie and so wasted an extra $5 since the 3-D brought absolutely nothing extra to the film, as 3-D tends not to do.

What humor there is in the story seems most definitely aimed at the very little ones. The relationship between Manny and his daughter may have been intended for the grownups in the audience but it's so simplistic as to be meaningless.

In my review of the previous Ice Age film, I mentioned that the only way I would be excited to see another sequel was if Buck, the character voiced by Simon Pegg, were to take center stage. Sadly, apart from a blink or you'll miss it cameo, Buck is missing in action.

Now I can't think of a single reason why I would be excited to see another sequel. This Ice Age has long since melted. It's time to mop it up already.

Crash and Eddie having more fun than the audience.

Ice Age: Continental Drift may as well be called Ice Age: Beating a Dead Mammoth. These characters barely had enough personality for one film, let alone enough for three sequels. The film makers, at least in part, understood this as they just kept adding more and more characters each installment.

All of the films deal with the issue of "family" and what constitutes one. This one is about Peaches trying to fit in with her friends and venture out on her own. Yawn! Those "dramatic" moments are the least entertaining parts and slows down the film's pace.

With the exception of Sid, the original characters all take a back seat to the new ones when it comes to generating any laughs. This time around it is Wanda Sykes as Sid's Granny, who steals every scene she appears. Her lines are not clever in the least, but her delivery and voice is. "Y'all got some ugly goldfish." Is only made humorous because she says it.

The only way these screen writers seem to be able to make a joke is by having mentally challenged characters, be it Sid or his Granny. My favorite characters, Crash and Eddie, showed up in the second film. They are always energetic and content no matter what is happening. When all the other animals are worried about the impending doom, Crash and Eddie are enjoying themselves. When asked how they can act that way, one of them explains, "We're very, very stupid."

That also sums up this movie. I get that children may find something to enjoy here, but any adult who likes this film should probably hang out with Crash and Eddie.

Like a huge glacier creeping down the side of a mountain the Ice Age movies are an unstoppable juggernaut. Despite middling reviews Continental Drift made boatloads of money around the globe and finished 2012 as the top grossing animated film of the year. A fifth installment is already in the works. It's enough to make a person wish for climate change to come along and melt the whole redundant bunch.

These characters are like familiar old friends and the story retains its power to entertain, provided you are still young enough to be a member of the coloring book set. Only a young child would find it funny when a bird asks a mammoth, “When you drink water through your trunk, does it taste like boogers?”

The best scenes are the ones at sea as Ice Age parodies pirate movies. Granny is quite funny. I laughed when Manny is surprised that she was able to sleep through a storm at sea and she replies, “I slept through the comet that killed the unicorns.” It gets too absurd even for a cartoon aimed at toddlers, however, when her pet Precious finally shows up.

At least these movies are fast paced and the jokes fly by at a quick enough rate that even the ones that don't work are replaced by others before they have a chance to linger and stink up the screen. As long as these movies keep raking in the cash I'm sure they will continue to appear every three or four years. I can see the next one now. Sid, Manny and Diego (and Scrat of course) will get frozen in a block of ice only to be discovered and defrosted in the modern world. Ice Age: Unthawed. I can't wait (sarcasm). 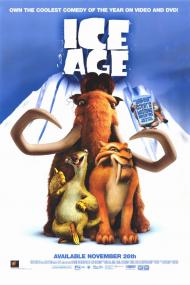 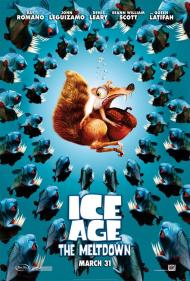 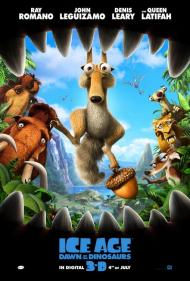