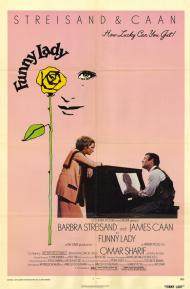 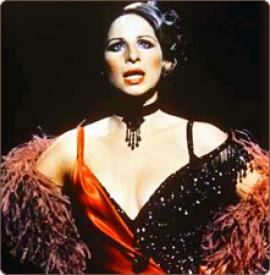 Released 7 years after Funny Girl made Barbra Streisand an Oscar winning movie star, Funny Lady tries hard but is an overblown and inferior movie. Whereas in the first one Streisand created a 3 dimensional character that was as much herself as Brice, this time around she seems to be playing a caricature of the Ziegfeld star. She is in full tilt diva mode from start to finish. Also reflective of the changing times, unlike the first movie, Funny Lady features adult language such as shit, ass, and god-damn.

The story picks up where Funny Girl left off. Fanny is divorced from Nick and after the stock market crash of 1929 she needs a hit show badly. Enter up-and-coming song writer/producer Billy Rose (James Caan). He gives Fanny's career the jolt it needs and eventually they fall in like with each other. Their subsequent marriage is more one of convenience than passion, especially since Fanny is still carrying that torch for Nicky Arnstein. Omar Sharif reprises the thankless role here in a few brief scenes.

Eventually the relationship with Rose turns sour and in the movie's final scene it is years later and Fanny is in Hollywood doing her Baby Snooks radio show. Billy shows up to offer her a part in his new show. Fanny tells him she needs to think it over, but clearly she is happy to be asked. It is a rather anticlimactic ending. Why not end with Fanny's death? Were they expecting to make Funny Granny?

Roddy McDowall and Ben Vereen are both in supporting roles but it is the tenacious costar that can get a song or a joke in around Barbra. She completely dominates the movie. The songs are good but not in the same league as Funny Girl. The most memorable of the bunch is “How Lucky Can You Get" which Streisand belts out dramatically on an empty stage. The rousing gospel infused “Great Day" is an inspiring number but definitely sounds more like 70's pop star Streisand than 1930's Vaudevillian Brice.

Yes, Streisand is great. She sings, dances, cracks jokes and bull dozes her way through the script. But the plot holes are gaping. The opening night of the first show Billy produces for Fanny is ridiculous. Everything that goes wrong would have been discovered during a dress rehearsal, which apparently they didn't have. Still, it is worth watching to see La Streisand, young, gifted and on-fire talent wise. 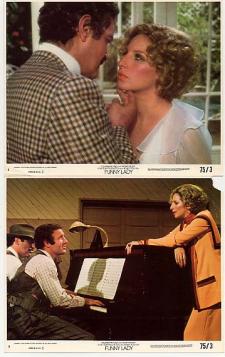 Fanny Brice and the two loves of her life, Nick Arnstein and Billy Rose.

Funny Lady is an overblown mess. It runs over two hours long and features too many songs. The entire story arc is told in four scenes. Patrick calls Nick Arnstein the thankless role, but I disagree. All four scenes either feature Nick or discuss him.

The first is when Fanny sees him in the audience and they talk in her dressing room. It is a glimmer of the first film. Whereas, Fanny has been a cold diva up till now, she suddenly becomes a love struck kid around Nick. It is one of Streisand's best acting scenes in the movie. It is the only time we see Fanny as vulnerable.

When Fanny and Billy are on their honeymoon, we find out that Billy is jealous of how Fanny worships Nick. This scene also features the one line I always remember, "How come you never go to the can?" Billy yells at Fanny.

When Fanny and Nick meet for the second and final time, Fanny finally sees Nick for the cold opportunist he has always been. This scene features a few bars of "People" as a nice reminder of their history. Putting Nick, once and for all, in her past, she can now give herself to Billy, but it is too late as he has moved on.

I agree with Patrick that "How Lucky Can You Get?" is the show stopper in the film. Streisand is sporting a sexy black dress, revealing lots of cleavage, as she pours out all kinds of emotion into the song. That is just one good moment in a sea filled with floating debris. "Great Day" demonstrates that Streisand is best when performing alone. She looks awkward the entire performance. "Lets Hear it For Me" tries to capture the same energy and urgency of "Don't Rain on my Parade" but fails. It features Streisand driving a nice classic car and then taxiing down a runway in an old plane. The scene does not work.

There is a decent story at the heart of this film, but it is buried under a whole lot of show tunes and dragged out scenes. Funny Lady needed better editing. 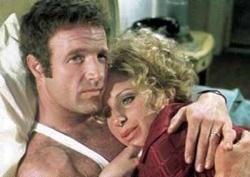 Patrick, I had the same thought about the disastrous show. Didn't they rehearse any of these numbers? It's rather ironic that the show is too long and overproduced and yet the producers of this movie couldn't see that they had the same problem. There's at least 45 minutes worth of material that should have been left on the cutting room floor, starting with (no offense Ben Vereen) the "Clap Hands" number and definitely including the synchronized swimming routine.

The shame of it is, I agree with you Eric that there is a decent love story at the heart of this movie. I liked the character of Billy Rose and thought that James Caan does a nice job in the part. I thought their good-bye scene in the train station where he tells Fanny that to his new girl, he's Nick, spoke volumes. It just takes way too long to get to that point.

There are parallels in the love triangle here with Gone with the Wind. Nick is to Fanny as Ashley is to Scarlett. Both women pine over a man who isn't right for them while the man who is right for them lies right under their noses and both women realize it too late. Only this movie is seriously lacking the passion that Clark Gable and Vivien Leigh brought to their parts.

Streisand's reluctance to return to this role is well documented and I think it shows in her performance. She belts out the songs well enough, but her Fanny seems flat and without that comic spark that made her so endearing in Funny Girl. It's partly due to the movie, but it does seem as if her heart just wasn't in it.

Of course, I could never watch this movie without thinking of Kevin Kline and Joan Cusack in In & Out.
She: " Does anybody here know how many times I had to watch Funny Lady?"
He: "It was a sequel. She was under contract."
She: "Fuck Barbra Streisand, and you!"
I wouldn't go so far as to share her full sentiment, but I would be quite happy to never watch this movie again. 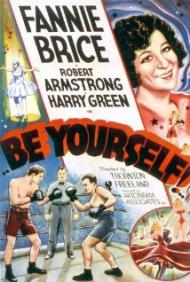 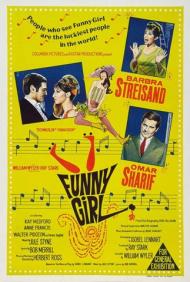