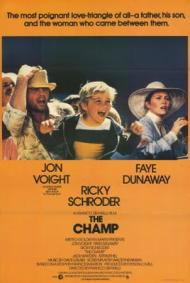 Ricky Schroder and Jon Voight in The Champ

This 1979 remake of the classic 1931 tear jerker, is not only as heartwarming and emotionally stirring as the original, it surpasses it.

Jon Voight stars as Billy, a onetime boxing champion who retired after his wife, Annie, left him a single father. Billy spends his days working with horses at the race track of the rich, Hialeah in Florida. At night he drinks and gambles to excess. His son T.J., worships him, calling him "Champ" instead of Dad.

After a gambling windfall, Billy buys T.J. his very own horse and they enter her, whom they name "She's a Lady", in the races at Hialeah. There, T.J. runs into Annie, who he charms with his childish cheerfulness and outgoing personality. Neither realizes at first who the other is. Then Annie sees T.J. with Billy and figures it out.

Here is where this version surpasses the original. Annie meets with Billy and tells him that she knows that T.J. is her son. Billy, none too eager to see Annie, remarks, "Even a dumb horse knows its own foal." The original film gave little details into Billy's and Annie's past, but here we get a clear picture as to why they divorced. Their argument over the custody of T.J. is much more emotionally stirring.

The cast here is likewise better than the original. Jon Voight's best moment comes when we discover that he still loves Annie, who does not return his affection. Dunaway is good in the scenes where she realizes she is not equipped to deal with T.J. discovering who she is. The real scene stealer is, of course, Ricky Schroder as T.J.

Ricky Schroder will break your heart in the final scene. His pleas for his father are as moving as anything you will ever hear. It is an extremely manipulative scene, emotionally speaking, but that is what movies do, at least the good ones.

As Scott would no doubt note, this version is longer than the original. It helps in that some of the added length is used to better explain the characters. Another reason for the added length are the references to the 1930s, perhaps as a nod to the original film. 30s star Joan Blondell has a small role here as a comic relief. Dunaway narrates a fashion show that features dresses from the 30s. Those are nice details but unnecessary, as is the training montage.

The Champ is a heart stirring drama about a dysfunctional family before the term was common place. At different times you root for different characters. Both Billy and Annie are culpable for the situation they created and both eventually pay a price for it.

Jon Voight and Ricky Schroder in The Champ.

Italian director Franco Zeffirelli's first American production, The Champ is overlong and lacks focus. There is too much filler going on throughout the movie. Eric already mentioned the fashion show and the training montage, both of which serve only to postpone the inevitable ending that we all know is coming. At one point the director lets his camera linger on a large group of children playing in the surf as the Champ walks by, pausing to glance wistfully at their innocent exuberance. It serves no purpose other than slowing the movie down while insulting the audience's intelligence level. We get it already. He's a flawed has-been but the Champ's also a sentimental guy who likes kids.

This Champ was panned by most critics in 1979 for being a completely unnecessary remake. (Actually it was the second completely unnecessary remake. The first one was called The Clown (1953), it starred Red Skelton in the same plot but as a clown rather than a prizefighter. If you can imagine.) Despite the fact that Voight and Schroder both give excellent performances, I have to agree with those critics. Unlike the original version this one gets sidetracked too often, and the climax is, if anything, even more shameless in its emotional manipulation. And the earlier scene where the Champ sends little T.J. away in tears (for his own good mind you) is overdone and maudlin in a way the 1931 version never is.

Perhaps it's the simple fact that this tearjerker plot is so overdone and cliché ridden that it only works in a scratchy old black and white movie made during the early years of the Great Depression. I don't know, but Wallace Beery and Jackie Cooper were so naturally magical together, while Voight and Schroder seem to be ACTING their chemistry. It's technically well-done but it doesn't ring as true to me. Oh sure, they both pull out all the stops for the big emotional scenes, they push all the right buttons, but something is lacking, and it just takes too damn long getting there. Faye Dunaway is most certainly not my idea of the nurturing type. She plays that angle well enough but she is no Irene Rich when it comes to the scenes where she is being motherly and comforting to her son.

I did enjoy seeing several familiar old faces one more time. Joan Blondell was a trouper right up till the end, never losing her wit or vigor. She was making movies in Hollywood back when the original Champ was made. She passed away less than a year after filming this movie, and she had two other pictures in the can when she died. This was also one of the last films the very distinctive voiced Strother Martin would make before his death in 1980. Elisha Cook Jr. gets a few good moments as Georgie. It's heartbreaking when T.J. tries to console him during the tragic final scene. Like Joan Blondell, Elisha Cook had been in Hollywood since the 30s. He appeared in such classics as The Maltese Falcon (1941) and Shane (1953). He is probably best remembered by later audiences for his recurring role on the popular television cop-show of the 1980s, Magnum, P.I.

Just how blatantly manipulative is the final scene in The Champ? Well over the years it has been used extensively in psychological research involving sadness and various emotional responses. You can honestly say there is legitimate scientific evidence to suggest that this is one of the saddest scenes ever acted out on film. I'll still take the Beery/Cooper, King Vidor version any day. As for Franco Zeffirelli, he followed this movie up with Endless Love. 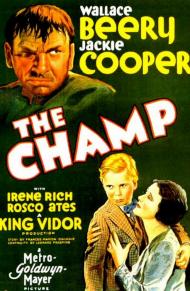