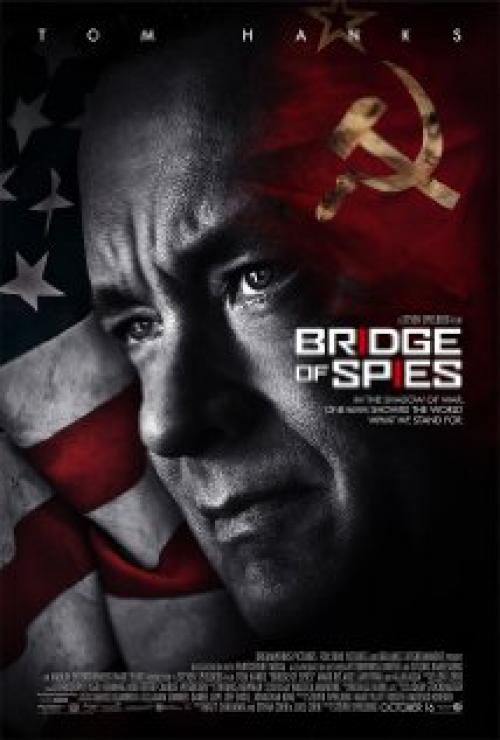 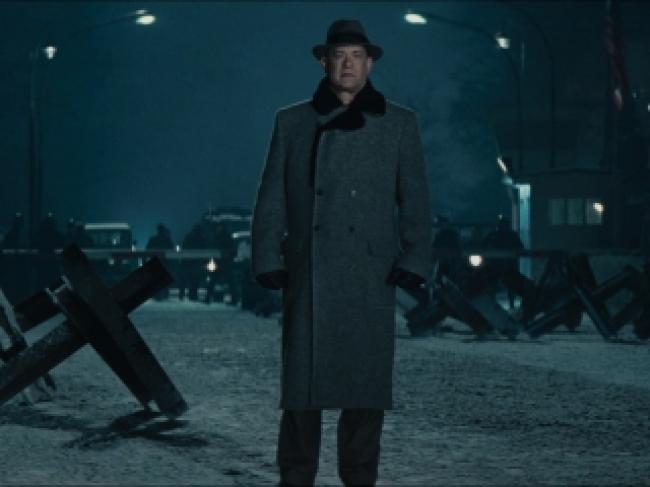 Tom Hanks in Bridge of Spies.

Bridge of Spies is Steven Spielberg a la early John Le Carre. It's a story of espionage set during the Cold War, but instead of a featuring a James Bond like figure, the film stars Tom Hanks as a middle aged family man drafted into the service of his country to broker a deal with the Soviet Union. With a script co-written by the Coen brothers, it's an entertaining thriller with an old fashioned feel to it.

Hanks plays James Donovan, a Brooklyn lawyer who is asked to defend Rudolph Abel (played by Tony Winning veteran stage actor Mark Rylance), an accused Soviet spy. Although everyone else simply expects Donovan to go through the motions so Abel will be seen to have received a fair trial, Donovan takes his job seriously, befriending Abel in the process. Although Abel's conviction is a foregone conclusion, Donovan's handling of the case leads to his being called upon to act as a mediator between the Soviets and the Americans in a prisoner exchange following the downing of an American U-2 spy plane over Soviet Russia. Donovan is sent to Berlin to negotiate where the Wall is in the process of being built. Donovan must navigate the tricky tightrope of international diplomacy and relations between the US, the Soviets and the East Germans.

Not only is the film set 50+ years ago, but in some ways it feels as if it were made then. Despite some attempts at shades of grey, there's little subtle about the film. Emotions are worn on sleeves and the music swells at all the appropriate moments. Donovan finds Hanks employing his everyman persona to good effect in a part that had it been made in the time it's set would surely have been played by Spencer Tracy. While both the Soviet and the American governments are shown to be devious, Donovan and Abel are shown to be men of principle who are just trying to do their jobs to the best of their ability. Both Hanks and Rylance deliver understated, but excellent performances.

Although a political thriller, the thrills are more cerebral than action packed. Donovan pushes to do the right thing, resisting pressure from those around him to take the easy way out. He has to negotiate and interpret the overtures from a complicated number of sources, each with their own agenda. And despite the lack of action, it's a tribute to Spielberg and Hanks that during Donovan's time in East Berlin, there is still a sense of danger that permeates the atmosphere.

The story is inspired by actual events, although it condenses the time frame and skims across some of the historical detail. Spielberg is more concerned with capturing the feel of the period than creating a documentary. It's the fourth collaboration between Hanks and Spielberg. Their first since 2004's The Terminal. As with all of his films, Spielberg has produced another high quality piece of entertainment. 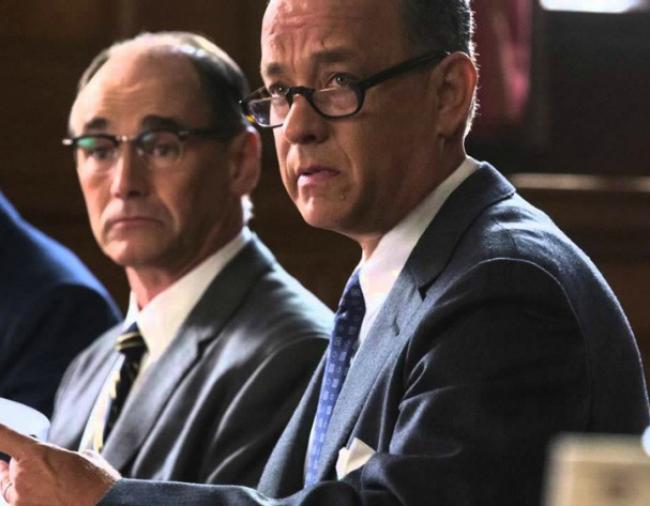 Mark Rylance and Tom Hanks in Bridge of Spies

I agree that Bridge of Spies is a quality piece of entertainment but it is not without its flaws. The first half drags a bit and could have used better editing. As Scott noted, the movie has an authentic look but a bit too much time is spent on the setting. Do we need to see the school children saying the pledge of allegiance or the Donovan boy watching a duck and cover film at school? Sure, those things show where our hearts and minds were supposed to be in those days but they do not advance the plot.

Another wasted moment is when Donovan’s young assistant protests to working late because he has a date. That night, the oldest Donovan daughter comes home saying she was stood up but refuses, when asked, to say by whom. Moments later the assistant walks in with paperwork for Donovan and the daughter makes a weird face, while the assistant does not react to her in any way. Was that her mystery date? We are led to believe it was but nothing is ever again brought up about it. They should have either cut those parts out or had a punch line sometime later where Donovan discovers his daughter is dating his assistant.

One of my favorite aspects of this film is that Abel, as played by Mark Rylance, is an utterly forgettable middle aged man. You would not notice him on the street or think him at all threatening. He would blend into any crowd and never attract your attention. Think of it this way. James Bond is always played by a good looking actor who dresses well and carries himself with all the confidence in the world. You would notice him the moment he entered a room, while Abel would easily come and go unnoticed.

Look at the scene early on when the feds bust into Abel’s room to search it and arrest him. He feebly puts on his glasses and asks for his false teeth. They oblige him. He then asks that he might clean his paint palette as he does not want it to dry and be ruined. He seems so helpless that they let him, not knowing that when he grabs a rag and starts wiping the palette, he is also destroying his last piece of communication from whomever he is secretly working for. Had it been James Bond asleep in that room they would have handcuffed and kept a gun on him at all times, and certainly not allowed him to do anything, let alone even move. 007 may make for a more exciting cinematic spy but he is not necessarily a more realistic or even effective one as someone like Abel.

Years ago, "Life" magazine compared Tom Hanks with James Stewart and posed them together for a photo. However, I like Scott’s comparison of Tom Hanks and Spencer Tracy. They share a similar screen presence. Both, upon sight, instill the audience with the feeling that the character they are portraying is a mature man of some wisdom. They make us feel like the men they bring to life are someone we would like to have as a neighbor or an uncle. Because of that, we cannot help but like Donovan and want absolutely no harm to come to him or his family. The rest of the cast is merely in secondary roles to Hanks and Rylance.

The only other one that stood out for me was Austin Stowell as the downed pilot, Francis Gary Powers. It was not because he does anything amazing acting wise, althought the look on his face during his Russian trial speaks volumes, it was because he looked so damn familiar. At one point I thought he was a baby faced Stephen Amell from "Arrow" and the next I thought he looked just like Clay Honeycutt from "Big Brother" season 17. I guess that is what happens when you are generically good looking.

The second half of the film is definitely the better half as the tension rises and you never know who is telling the truth and you never know what any decision that anyone makes may lead to. Donovan walks into a situation not knowing what the outcome might be. It could range from him simply being sent away unharmed or the death of a couple of Americans. As Scott noted, the stakes are high even if the action is minimal.

Bridge of Spies is neither Tom Hanks's nor Steven Spielberg’s best film but it is definitely worth a watch. 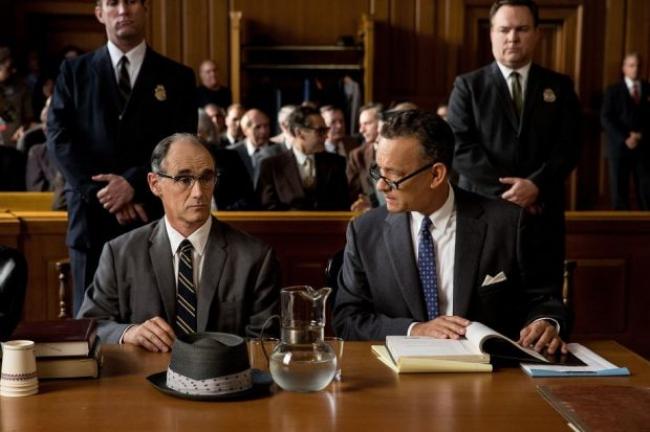 Bridge of Spies eloquently demonstrates the age old truth that when governments square off against each other it's always individual citizens who pay the highest price. Moreover, it demonstrates that often it's these nondescript persons who behave the most nobly. Donovan and Abel are two such people as their actions show throughout the movie.

My brothers mentioned James Stewart and Spencer Tracy, both apt comparisons to Tom Hanks and especially the character of James B. Donovan. I was also reminded of Atticus Finch (according to Steven Spielberg, Gregory Peck had expressed interest in playing Donovan back in 1965). Like that famous fictional southern attorney, Donovan willingly becomes a pariah for his beliefs. The biggest difference in their cases, of course, being the fact that Tom Robinson was innocent while Rudolph Abel was guilty as charged. Even so, it's a bit hypocritical of the American public to demand his head on a platter while we had spies in Russia doing the exact same thing. Rudolph Abel and Francis Powers were simply two men who got caught doing the jobs their governments paid them to do.

This is such a straightforward espionage drama I was surprised to read that the script was co-written by the Coen brothers. It is only in the personality of Rudolph Abel that their quirky sense of humor comes through. Abel's deadpan query of “Would it help?” every time Donovan asks him if he's worried or frightened is quite humorous. Mark Rylance is wonderful in the role. Both he and the screenplay are worthy of their Oscar nomination.

I enjoyed the inclusion of a few background details. Twice movie theater marquees are shown with symbolic movies playing. One is Spartacus (1960) (written by self-proclaimed communist and blacklisted screenwriter Dalton Trumbo) and the other is the German language version of One, Two, Three (1961), a Billy Wilder comedy starring James Cagney as an American businessman in West Berlin.

Steven Spielberg is indeed a terrific storyteller. It has always been his greatest gift as a filmmaker. It's never surprising when a Hollywood movie plays around with historical accuracy and Bridge of Spies is no exception. For example Donovan's home was never shot at. Despite whatever dramatic license the script takes this is still a very taut thriller. For the record, James B. Donovan died of a heart attack in 1970 at the age of 53. Rudolph Abel died in November of the following year at 68.