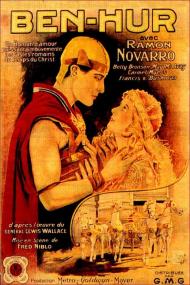 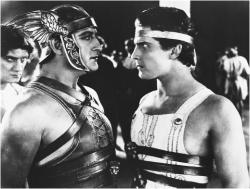 Although the 1925 version of Ben-Hur has been over shadowed by the 1959 version, the silent film is a far more significant film, historically speaking.  With a huge budget, and a gigantic cast of extras, it was almost never made.

The movie opens with the story of the birth of Jesus Christ.  We are then introduced to two former childhood friends, Judah Ben-Hur and Messala.  They meet again as adults.  Messala is now a Roman officer.  Judah is a wealthy Jew living with his sister and mother in Israel.  The conquering Roman army marches below their window as they watch.  Judah slips and pushes a brick down onto a Roman.   Judah is arrested and sent away to be a galley slave, his property is confiscated while his mother and sister are imprisoned.

He rows a Roman ship with other slaves.  His ship gets into a sea battle that leaves only him and a Roman Officer floating on some debris.  Eventually they are rescued by another Roman ship.  In my favorite scene, the officer and Judah climb a rope up the side of the ship.  They are both happy as they will now not die at sea.  Judah then spies one of the rowing slaves through a portal, and realizes that although he is saved from death he is still just a slave and will likely be sent below to row.

The Roman officer surprises him by introducing him to the rescuing ship's crew as his son.  Judah now becomes a champion chariot racer and lives a comfortable life.  This leads to the famous chariot race.  Judah's old friend Messala is scheduled to have a race against a driver who died in practice.  The sheik who owned the driver and chariot hires Judah to race for him.  Messala, not knowing who he is, sends his Egyptian lover to seduce Judah and report back to him.

Throughout the story references are made of Jesus Christ.  A former servant of the house of Hur comes forward and tells Judah that he in fact is a very wealthy man as he kept track of his fortune as he lived off it.  He also has a daughter, Esther, that Judah is in love with.  Judah decides to use the money to raise an army in defense and support of Jesus, whom he has never met, but heard tales of as a Jew who will save his people from oppressive Roman control.

Although the race is exciting and very well filmed, I liked the ending that features the Crucifixion.   As Jesus is carrying his cross through the streets, Judah pushes his way through the crowd to tell Jesus that his army is almost there to fight for him.  With a quote from the Bible, Jesus tells him to not take up arms, but to forgive.  A few moments later, Esther leads Judah's Leper mother and sister to see Jesus in hopes he will cure them.   This poor guy is on his way to his death and people are still asking for favors.

When this movie was first released it was quite the spectacle.  The huge sets and cast set new records.  It claims to have used 125,000 people.  They originally went to Italy to film it, but had to reshoot the chariot scene in California.  They built an actual arena and filled it with thousands of extras as spectators.  So many people were used that then unknown actors like Clak Gable, Carole Lombard, Myrna Loy and many other future stars were extras.  Likewise stars of the time such as Mary Pickford and Harold Lloyd reportedly volunteered as extras.

Ben-Hur was quite the ground breaker.  This movie features color film.  All of the scenes that feature Jesus, or reference to him, were filmed in color.  It has two nude scenes.  Early on, some Roman soldiers harass a girl walking by them.  One soldier pulls her shirt off and she falls to the ground, giving a two second flash of her breasts.  In a parade scene near the end, some topless slave girls throw flowers.  Neither scene, or the seduction scene with the Egyptian whore, appear in the 1959 remake, making this version all the more realistic in comparison.  William Wyler, who directed the 1959 version, was an assistant director on this film.

Although a tighter editing would not hurt, this film remains a very impressive piece of work.  I was not bored the entire film and was in fact moved by the ending.  As Patrick likes to point out, Hollywood used to film on location and used extras instead of special effects.   Ben-Hur took a long time to film.  It went over budget.  Navarro replaced the original actor, after several scenes were shot.  Rumor was that a man died during the chariot race scene.  WIth all it's problems, Ben-Hur still went on to become a silent film masterpiece! 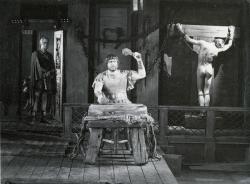 A scene from Ben-Hur that would never have made it past the Hays Code censors.

Ben-Hur is truly one of the great spectacles in Hollywood history, not just the silent film era. I actually think it is superior to the William Wyler version. In fact I would recommend this as a great introduction to silent movies. It is fast paced, filled with action, bloodshed and sex. Eric, you didn’t mention one of the nude scenes. On the slave ship a male slave is shackled standing up, completely naked, with his back to the camera (see photo). Much of this movie would not have been allowed once the Hays Code took effect.

There are two great scenes that truly stand out. The first is the battle at sea. It is visually riveting, filled with excitement and brutality. A slave is tied to the prow of one of the ships as it is rammed into another ship. The hand to hand combat scenes hold up well. The special effects are likewise impressive. This scene shows just how talented Hollywood movie makers had become nearly a century ago. What you see onscreen is far more real than in any of today’s CGI movies.

The other great scene is of course the chariot race. Although Wyler’s version has the benefit of being in color and shot in widescreen, this original race is actually more tense and exciting. It looks very real and dangerous. I’m sure many horses and extras were hurt during its filming. The close-ups of Ramon Novarro and Francis X. Bushman driving their chariots were brilliantly shot with a camera mounted on the front. Wyler would in fact copy this technique for the remake.

I have never been a huge fan of Charlton Heston. Novarro makes a much better Judah Ben-Hur. He was incredibly handsome and photogenic. With the release of this movie he would soon rival Rudolph Valentino as the most popular matinee idol of the day. He was gay in real life and was discovered murdered in his apartment in 1968. The victim of a sexual tryst gone horribly wrong.

Francis X. Bushman, although pretty much forgotten today, was also a huge star at the time. He was incredibly strong and manly and made an imposing Messala. The sight of him wearing that winged helmet driving his chariot with a grimace on his countenance is an iconic image of the silent era.

I had never seen this movie before but I agree wholeheartedly with my brother. It was not only groundbreaking and historically important it also remains wonderfully entertaining. The early use of color is done well in the religious scenes. Ben-Hur was one of the movies that put MGM on the map. It was widely considered to be the greatest epic film until Gone with the Wind came along in 1939. A must see for any serious movie buff. 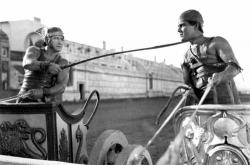 Even though this movie isn't perfect, I'm still going to give it 4 stars. The good parts are so good that they more than make up for the bad ones. Hell, the chariot race alone is worth 4 stars. Everything else is just a bonus.

Patrick mentioned that this was considered the greatest epic film until Gone with the Wind was released. This is fitting because the novel this movie is based on was the best selling American novel from 1880 until Margaret Mitchell published her tale of the old South.

One of the odd things about the way the movie is filmed is that it never actually shows Christ. You see his hands, but never his face. The author of the book Lew Wallace received many requests to turn his novel into a stage play, but he disliked the idea of having Jesus portrayed on stage. He was finally sold on the idea by a clever producer who proposed that the savior be represented by a shaft of light instead of an actual actor. This idea of not showing Jesus in person, carried over to the film version.

Novarro dos an okay job in the lead role and handles the action quite well, but his acting is the most hammy and over expressive in the film. He does look the part, much more so than several of the very blonde, obviously European women in the film, including the actress who plays Mary.

It is in the action scenes and the crowd scenes where this movie really excels. My brothers mentioned the naval battle and I agree that it's impressive. Even just the opening scene when the Romans enter the conquered city is on an amazing scale.

It is the famed chariot race that steals the movie though. It's an action packed scene that is filmed amazingly well. Fortunately this movie has been preserved amazingly well and you can feel every bump and crash. Eric mentioned that one of the stuntman was killed. It reportedly happened in Italy, before the filming returned to America to reshoot the scene. Several horses were killed as well and this knowledge simply adds to the feeling of realism when you see chariots pile up in the arena and groups of horses get knocked to the ground. The race has been imitated and paid tribute too ever since. You can see echoes of it as recently as the Pod race in Star Wars: The Phantom Menace.

Gore Vidal, who co-wrote the 1959 version of the film, claimed that he injected a homo-erotic sub-text to the script, but there's some evidence of that here if you choose to interpret it that way. The men's costumes and naked male slave on the galley ship are enough to make you wonder what was going on in the director's mind.

The movie does run a bit long and as I said, some of the acting is a bit overwrought, but there's so much amazing spectacle that it's easy to forgive its weaknesses. This has to be the greatest silent biblical epic not filmed by Cecil B. DeMille. 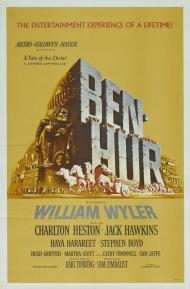