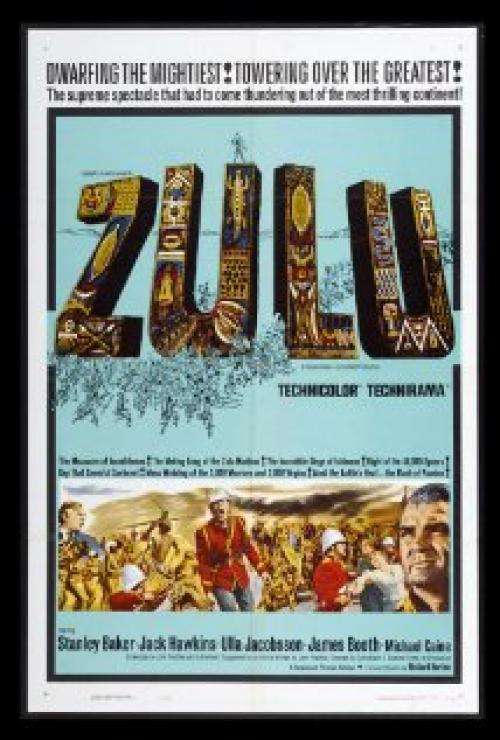 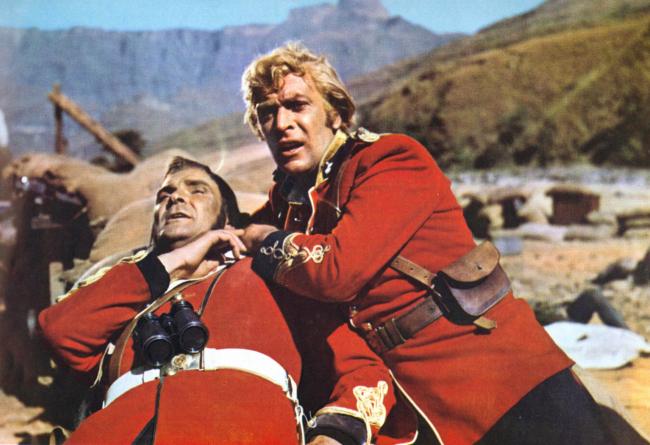 Zulu is an epic from 1964 that depicts the historic Battle of Rorke's Drift wherein 150 British Soldiers faced off against 4,000 Zulu warriors. It's an old fashioned patriotic war movie that is unashamedly pro-British in a way that would have made Rudyard Kipling proud. Like many a Western, of which it bears more than a passing resemblance, it glosses over the reasons for the battle and why the Zulus were justified in attacking an invading army, and instead revels in the unquestioned bravery of the stalwart British. It is perhaps best remembered today as the film that made Michael Caine famous.

The film was shot almost entirely on location in South Africa and in 70mm. The rolling hills, wide open skies, and distant horizons are shown off beautifully. Perhaps it was because it was such a British themed film that it received zero Oscar nominations, not even for cinematography. Ironically, it was another British film, My Fair Lady, which was shot almost entirely on a soundstage, that won that particularly Academy Award that year.

Anyone who's a fan of Monty Python's The Meaning of Life will undoubtedly recognize the opening scene of the film. It starts by panning across a smoking battlefield littered with British dead. It's a scene Python duplicated almost exactly for the Zulu section of Meaning of Life. The dead shown are from the Battle of Isandlwana, which was a crushing defeat of a British force by the Zulus. Flushed with this victory, the Zulus begin to move across the country. Standing in their way is a missionary station known as Rorke's Drift, which the British Army is using as a supply depot and hospital. With barely 150 soldiers present, including the wounded, and 4,000 Zulus approaching, it looks as though it will be a massacre. It is only the advanced weaponry of the British and their knowledge of military strategy that gives them a chance of surviving.

Cockney Michael Caine was suggested for the part of Private Hook by the film's star and producer, Stanley Baker. However, director Cy Endfield didn't think Caine looked Cockney enough and so asked him to audition for the part of the upper class Lt. Bromhead. Despite what Caine called in his autobiography, "one of the worst auditions of my life." Endfield cast him anyway. Caine drew on his experience of National Service spent in Korea during the war to create the part. One detail Caine didn't mention to the producers was that he couldn't ride a horse. Again according to his autobiography, he spent most of his first day of filming trying and failing to shoot a scene of him riding across country in a long shot. With the sun going down and Caine unable to get his horse under control, Endfield turned to the prop man and asked if he could ride. Caine wrote later, "So my first appearance in my first ever major motion picture is in fact not me at all, but a prop man called Ginger in my hat and cape." However, equine issues aside, Caine's performance proved to be starmaking and it led to The Ipcress File and Alfie in quick succession.

What helps Caine's Bromhead stand out is that he's one of the only characters to have an arc. He begins the film as a pompous, stereotypical upper class Officer, but after the hell of battle, he ends up more human. The rest of the cast is fine, without being distinctive. Baker is the star, and was a big star at the time in Britain, but Caine is more charismatic.

The film runs roughly 2 hours long, out of which nearly one full hour is the battle itself. Wave after wave of Zulus attack the tiny fortress, only to be thrown back time and time again, but each time inflicting more casualties on the dwindling British. These scenes of battle are tense, but unfortunately some of the hand-to-hand combat is very poorly choreographed and is obviously faked, which undercuts the action. The fighting in some cases is done too slowly and it looks as though the actors were trying to avoid really hurting each other. Despite that the battle as a whole is still well done and has inspired later filmmakers. Peter Jackson said in an interview that he based the Battle of Helm's Deep in The Two Towers on the battle scenes from this film. And Ridley Scott used the Zulu war chant from this film as the Germanic war chant in Gladiator.

Although it's an imperfect film, and a rather old-fashioned one, Zulu is still worth watching, especially for fans of Michael Caine. 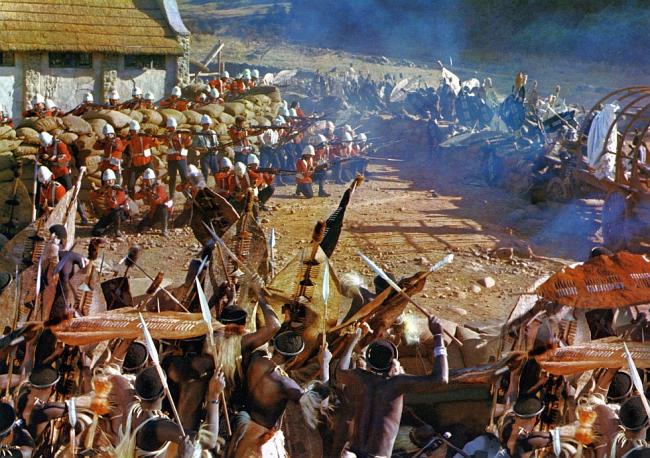 Yes, Zulu ignores the reasons for why the Zulus were fighting the British army and why they attacked the small missionary village occupied by some British soldiers. You can look it up for details but in short, a Sir Henry Bartle Frere was sent to South Africa in 1874 as High Commissioner for the British Empire to set up a federation in which the British would rule and the indigenous African population would supply them plenty of cheap labor. Diamond mines had recently been discovered and this area of the world was suddenly seen as very valuable.

One of the largest obstacles was the Kingdom of Zululand and its army. Frere, with a seeming intent on starting a war, presented a list of ultimatums, which he came up with on his own, to the Zulu king Cetshwayo, who is portrayed at the beginning of this film. After Cetshwayo ignored the demands, Frere sent Lord Chelmsford and his army to invade Zululand. It initiated the Battle of Isandlwana, which resulted in the deaths of so many British soldiers depicted in the opening scene.

Also as Scott noted, Zulu revels in the bravery of the stalwart determination of the British man at arms, but almost all war movies show the common soldier in good light. Even though these Englishmen are members of the invading army we still do not wish to see them die. Wars are not started by the foot soldiers but the politicians who sit on pimpled cushions a very safe distance away. Had Sir Henry Bartle Frere been at this outpost, I may have felt otherwise but as I wrote, the ones who start wars are never the ones to actually fight them.

Zulu reminded me of an old fashion American western, where an army fort gets attacked by a band of Indians. This tale of outnumbered men fighting against a much larger army most resembles The battle of the Alamo, which likewise took place in a remote location with a church at the heart of the defended location. In fact, the inspiration for making this film may have very well been the John Wayne movie The Alamo which had just been released in 1960. Zulu is an improvement as it contains more action and a much shorter running time. The Alamo has a near three hour running time.

One of the tensest moments is when the infirmary gets attacked. The wounded men inside must defend themselves against warriors coming through a door and the roof, all while the building is on fire. It is one of the better choreographed action sequences in the film. The battle that is preceded by both armies singing is likewise one that had me gripping the arm of my chair.

Scott mentioned that Michael Caine’s character has somewhat of a story arc but we are never truly given much characterization on anyone. All we are truly shown is that these are ordinary men desperately fighting for their lives against seemingly impossible odds. It makes for a gripping watch but the only outcome we look forward to is the end of the battle and how it turns out. Yeah, you can look it up but better you sit down and watch this historical battle play out in front of you.

Descendants of the actual Zulu warriors who fought in the Battle of Rorke's Drift in Zulu.

Despite its glossing over of history and its one-sided view of colonialism, Zulu is an excellent adventure movie. Sure it would have been better if they had shown some of the story from the Zulu warriors' perspectives rather than just the British soldiers but this certainly doesn't destroy the movie.

It remains a rip-roaring war picture with unforgettable cinematography, quotable dialogue, and a solid cast. I agree that its flaws are the lack of character development and the obviously faked hand-to-hand combat scenes. But again, these are flaws that don't really hurt the overall enjoyment of the picture.

Descendents of the actual warriors who fought in the Battle of Rorke's Drift were used in the movie, including the great-grandson of the Zulu King. He played his ancestor for the big screen. Perhaps the biggest change from real life was the ending. The Zulus never sang out of respect for the heroism of the British soldiers. In fact they continued fighting sporadically as they retreated from the approaching British relief column.

Meanwhile, some of the descendents of the British soldiers were less than pleased with the way their ancestors were written for the screen. Especially those of Private Henry Hook, portrayed here as a drunken thief. In real life he wasn't malingering “under arrest” in the hospital, he was actually stationed there as a guard. Hook's elderly daughter was so disgusted by the way her father was depicted that she walked out of the premier.

Despite a few minor flaws, Zulu is one of the great action/war pictures of the 1960s, cast in the hazy glow of nostalgia, honor and glory.