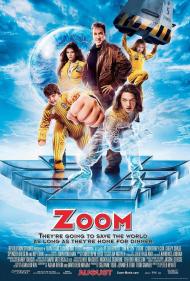 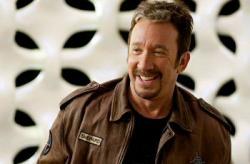 Ever the foolish optimist, I actually expected to enjoy Zoom. It's just too bad for me that the makers of this movie decided that the only people they truly wanted to enjoy it are five year olds or at least people whose sense of humor stopped maturing at that age. It's a shame really because the idea had some real potential. It could have been to superhero movies what another Tim Allen movie, Galaxy Quest, was to Sci-Fi movies.

Allen stars as Captain Zoom, a former superhero who now runs a garage. Years ago he was the leader of a teenage group of heroes that were working for the government. He lost his powers when the government decided to try to increase the groups abilities by dosing them with radiation. The end result was that Zoom's brother, Concussion, turned evil, Zoom lost his powers, and the rest of the group was killed during a battle with Concussion during which he was sent into another dimension. Now Concussion is on his way back and the government wants Zoom to return to train a new group of heroes.

The new group is pretty generic, one kid can turn invisible, one can move things with her mind, one can expand his body, and the youngest, Cindy, is super strong. The only one of them who stands out in any entertaining way is Cindy. A few mildly amusing moments arise through her use of her strength, which is juxtaposed with her propensity for cute outfits and her desire to be called Princess.

Assisting Zoom is a geeky Courtney Cox as the scientist in charge of the children. About the best jokes the writers can give her though is being clumsy, so she falls down a lot. The other scientist in the organization is played by Chevy Chase. It's been a long time since Chase has been in a movie and it shows how far he's fallen that this is the role he returns in. Most of the worst jokes involve him and most of them are slapsticky and all of them are groan-inducing.

Just to make things worse, there is also a Wendy's commercial right in the middle of the movie. Oh sure, they try to work it into the plot, but never in my life have I seen such blatant product placement. At one point, Zoom takes the kids for a ride in the flying saucer from Area 51, and they take it through the drive through at Wendy's. Over the course of the scene a whole bunch of Wendy's products are mentioned by name, and some are repeated. You could pretty much lift the scene straight out of the movie, slap a tagline on the end of it and you'd have a commercial with no editing needed.

As if the movie wasn't bad enough, the ending is completely anti-climatic. About the only thing that didn't disappoint me about this movie is that running-time, which is thankfully, a mere hour and 20 minutes. If you have to see this movie, you'd be far better off waiting until it comes out on DVD, where at least it won't cost you so much. 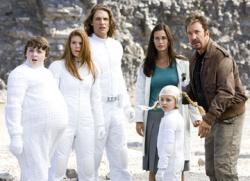 The cast of Zoom.

Most super-hero movies are helped by established comic characters. Zoom has no history and thus struggles terribly for the audience to invest any interest. It does not help that the four kids are copies of famous comic super-heros. At school they are treated like outsiders. X-Men anyone? One kid can turn invisible just like Sue Richards. One kid can enlarge parts of his body, similar to Reed Richards stretching abilities. One girl can move things with her mind like Jean Gray. Oh yeah, one character is super strong, but as Scott wrote she is a little girl so she is, almost, mildly entertaining.

The plot goes in one simple direction and never veers even slightly from it. You know each scene before it happens. You know how each character is going to act before they do. There is absolutely so little to keep your interest that you might as well bring a book and flashlight into the theater, to read, while your child is slightly entertained.

Scott's objection to the Wendy's plug is accurate, but Talladega Nights has a far worse one where they actually inserted a real Apple Bees commercial in the middle of the movie. There is nothing wrong with product endorsements, except when they remind the audience that we are watching a movie. In the case of Zoom, it didn't really do any damage.