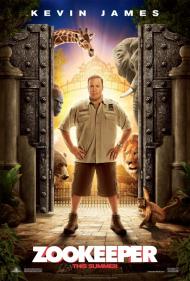 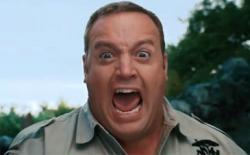 Kevin James demonstrates the face moviegoers should make if someone suggests they see this film.

When I committed to seeing every movie in wide release this summer I knew that I would have to sit through the bad with the good and Zookeeper is bad with a capital B. In fact, bad doesn't even begin to do it justice. This movie is a steaming pile of excrement without any redeeming features. Okay, I take that back. I guess it provided employment for the film crew who made it and with the state of the economy today, that's something I suppose, although you have to weigh that against the hard earned money that will be wasted on going to see it. I seriously considered approaching the box office after it was over and asking for my money back.

The movie opens with Griffin (Kevin James) proposing marriage to his hot, but bitchy girlfriend, Stephanie. She turns him down because he's, in her words, only a zookeeper. I would have thought that because he's shorter than her, outweighs her by about 300 pounds and is a clumsy idiot, whose only redeeming feature seems to be that he's nice to animals, and is clearly not in her league in every way, would be enough to make her turn him down, but she chooses to focus purely on his job for some reason. While this opening scene produces some groan inducing mild laughs, once the movie begins properly you'll be looking back on that moment as the height of hilarity because it's all downhill from there.

The story then jumps ahead five years and Griffin is still working at the zoo. A chance encounter with Stephanie leads him to think that maybe he has a shot at her again, but that maybe he should go and work with his brother who has a car dealership in order to win her back. The animals overhear this and get worried because they consider Griffin to be the best zookeeper at the zoo. They decide to help him try to win Stephanie back without having to change jobs.

I have many pet peeves about movies, but my biggest has got to be animals in live action films who act just like humans. I can forgive it in cartoons, but when it's live action it just annoys the fuck out of me and such is the case here. It turns out, you see that animals can talk, but they've chosen not to because of some "code" that they have. Not only can they talk, but they have intelligence on par with humans, or at least on par with Griffin who decides it's a good idea to take dating advice from a Lion, a wolf, a couple of bears and the rest of the zoo animals.  One of the few times I laughed was when later in the movie during a scene that is basically an ad for TGI Fridays, Griffin orders ribs. I'm glad to know that just because he loves animals and now knows that they're intelligent and can talk, he isn't going to let a little thing like that stop him from enjoying meat.

While you might think that why haven't the animals spoken to anyone else in the history of the world is the biggest question, there's actually a bigger one and that is, how does Griffin have not only one hot girl lusting after him, but two? Because you see he shortly has a fellow zookeeper played by Rosario Dawson also falling for him, although at least with her he has a love of animals in common.

You might point out that this movie with its slapstick humor and animal pee jokes is aimed at kids and I should cut it some slack, but I would disagree. First, why should we excuse dumb movies just because they're made for kids? Think of all the smart, classic and truly funny children's movies that have been made. We should be starting our children's movie going habits right and not feeding them this trash. Also, I would point out that the theater I saw this in was filled with plenty of kids and not many of them were laughing. Most of them seemed as bored as I felt.

All I can hope is that with the summer almost half over, this is the worst movie of it. Surely even The Smurfs will turn out to be better than this? Although the previews to Spy Kids 4 are a bit worrying. 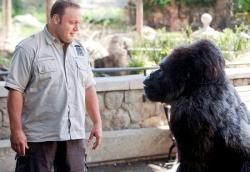 Kevin James and and his best friend Bernie

Scott, what did you expect from a film that you knew contained talking animals and Kevin James?  Sure, this is not David Mamet, but it is also not exactly a pile of fresh warm gooey feces.  Some children will love this film.  In fact, I ran into a woman taking her grandson to see it for the second time, and the film was just three days old.

I agree that James and Bibb are on no level a believable couple.  Clearly someone in casting thought it was better to hire a hot actress for the role, than a believable one.  Her part should have been trimmed as the only scenes she appears in that contains any amount of laughs are the proposal ones.  All other scenes only serve to remind the audience that she was once a model.

The animal scenes are the focal point of the film and provide what entertainment there is to be found.   Each animal tries to show James how to attract a female by the manner in which they would in nature.  Those scenes and the ones where he uses what he has been taught are the best moments in the film.  Scott, animals talking and acting human is hardly a unique plot device in family films?  The funniest character in The Wizard of Oz is a walking, talking, singing and dancing lion.

Zookeeper maybe a funny family film for forgiving first graders, but it does not create many laughs for the adults.  It took five people to write about a man who tries to attract a woman by taking advice from talking animals?  Two of them came up with the story while the other three were added to help write some jokes.  The producers should have paid them by the laugh and saved some serious money.