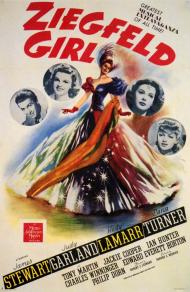 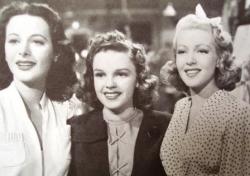 Ziegfeld Girl is the type of extravagant black & white MGM musical that they stopped making with the onset of World War II. It features a stellar all-star cast as well as a glorious supporting one. It's a tad long and the melodrama is overwrought at times but the talents of the stars and the unparalleled glamour that belonged to MGM make this one worth remembering.

Judy Garland, Hedy Lamarr and Lana Turner play three women discovered by legendary showman Florenz Ziegfeld (who's never actually shown). Judy Garland is (of course) a young vaudevillian singer/dancer, Hedy Lamarr is the wife of a struggling classical violinist who gets discovered when she accompanies her husband to an audition, and Lana Turner plays a department store elevator operator from Flatbush whom Ziegfeld discovers at work.

Jimmy Stewart, fresh from his Oscar win for The Philadelphia Story the previous year, gets top billing as Lana Turner's truck driver boyfriend. But in this ensemble the women definitely get the majority of the screen time.

Lana Turner became a huge star from this movie and she steals every scene she is in as the ambitious young gal from Brooklyn who takes to the bottle after hitting the big time. Hedy Lamarr is ravishingly beautiful and Judy gets a couple of swell numbers like the exquisitely sung "I'm Always chasing Rainbows" and the up-tempo "Minnie From Trinidad".

The memorable supporting cast includes Edward Everett Horton, Jackie Cooper, Eve Arden and Dan Dailey among others. MGM spent a pretty penny on this one and it shows. Cedric Gibbons did the art direction, Busby Berkeley staged the dance numbers and Adrian had ample opportunity to design some fabulous showgirl gowns.

Ziegfeld Girl is a beautiful bauble the likes of which hasn't been seen in a very long time. Just be prepared for a formulaic story that takes its time unspooling.