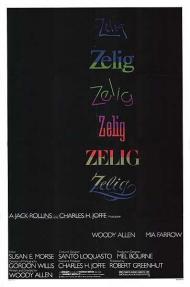 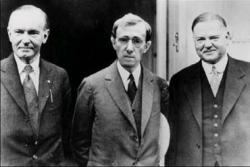 Zelig is a 1983 comedy from the mind of Woody Allen, shot in the mockumentary style. The bizarre story of one Leonard Zelig is told using a clever combination of interviews with leading intellectuals of the day like Susan Sontag and Saul Bellow, interspersed with archival footage, both real and recreated, and narrated by an unseen man. A full decade before digital technology would significantly simplify the process Allen, and cinematographer Gordon Willis, painstakingly inserted Zelig into existing vintage newsreel footage and historical photographs (see photo). They also filmed new scenes using 1920's technology to give them the right aged look. It took so long that Allen filmed both A Midsummer Night's Sex Comedy and Broadway Danny Rose while this film remained in production.

Zelig is a nondescript young man who exhibits the incredible habit of taking on the personalities and even physical traits of whomever he is around. At the beginning of the film this odd characteristic of Zelig's is first described by a quote from F. Scott Fitzgerald. At a society soiree on Long Island he observes Zelig declaring himself a Republican and speaking to the affluent guests in a refined accent. Later on, in the kitchen amongst the servants, Zelig adopts a cruder tone of voice while stating his loyalty to the Democrats.

As the story progresses Zelig's changes become more and more extreme. He becomes black around a black jazz band, and Chinese while working at a laundry. He soon gains notoriety by the public at large and is nicknamed “The Human Chameleon”. Songs are written about him and his story is told in a Hollywood movie. His fame brings him to the attention of a psychiatrist named Eudora Fletcher (Mia Farrow) who, believing his disorder to be psychological in origin, begins treating him. They eventually fall in love but not before Zelig has numerous adventures while rubbing shoulders with many famous people of the era.

Allen manages to insert his trademark one-liners into the story. While being treated by Dr. Fletcher, Zelig, true to form, assumes the personality of a doctor. During a session he tells her, “I have an interesting case. I'm treating two sets of Siamese twins with split personalities. I'm getting paid by eight people.” Eventually Zelig's antics catch up to him as he leaves in his wake a string of personal disasters. In one scene he is heard making this statement over the radio, “My deepest apology goes to the Trochman family in Detroit. I...I never delivered a baby before in my life, and I... I just thought that ice tongs was the way to do it.”

Allen cleverly satirizes conformity by taking it to such an extreme level. Zelig so wants to be accepted and liked that he buries his true personality while adopting the beliefs and tastes of whatever group he is around. You can have fun thinking about the serious implications of this character or simply enjoy the movie for its sly humor and very creative format.

I first saw this movie with my brothers in 1983. At sixteen I didn't completely get it. I hadn't watched it since then and I must say that I was pleasantly surprised at just how much I enjoyed it this time around. It is one of Woody Allen's most original stories and it seems to have gotten better with age. Or perhaps it is only my ability to fully appreciate it that has grown over time. Either way Zelig is fascinating and often hilarious. 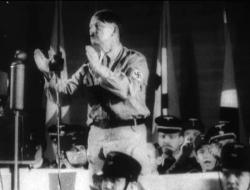 We knew not what to expect when we first watched Zelig as teenagers. What kind of nerds were we that we went to Woody Allen movies at such a young age? Like Patrick, I too found it a much better watch this time around.

Zelig is an exaggerated representation of all of us. Everyone, at one time or another has tried to fit into some group or situation by acting, dressing, or pretending in some way. Do not bother to tell me otherwise, EVERYONE has done it at some point. It is part of the human condition to want to belong, especially when we are young. I recall learning this lesson in middle school when, during gym class, I heard a punk rocker making fun of the jocks who all move together like sheep. Later, I saw this same kid in the hallway hanging out with other punkers dressed just as obnoxious as him.

Beyond the social commentary, Zelig provides some solid laughs. The Narrator describes Zelig’s youth, “As a boy, Leonard is frequently bullied by anti-Semites. His parents, who never take his part and blame him for everything, side with the anti-Semites. They punish him often by locking him in a dark closet. When they are really angry, they get into the closet with him.”

I also liked the old movies of famous people. James Cagney looks so very young in one clip. I wonder what year it is from. The footage of F. Scott Fitzgerald is the only known film of him. Other than a clip of Allen and Farrow in Times Square, most of the special effects are very seamless.

The moral lesson is that we all eventually find a place where we belong, one way or another. Through Zelig’s time spent with Dr. Fletcher, he learns to express his own opinion. During one therapy session he confesses, “I love baseball. You know, it doesn't have to mean anything. It's just very beautiful to watch.” They fall in love and he finally finds the acceptance he has always craved. As Zelig says after an exciting escape from Nazi Germany, “It shows what you can do if you’re a total psychotic.” 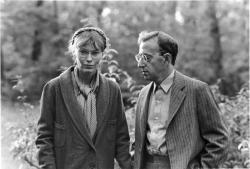 Eric might be exaggerating when he says that everyone has tried to blend in sometimes. I don't remember being like that when I was a teenager. I do agree with both my brothers that we were too young to appreciate it the first time, but then I didn't really want to see it anyway. I only went along because my brothers wanted to see it. And I probably wouldn't be reviewing it now if I wasn't going along with them once again. Okay, maybe Eric and Woody have a point.

Although he's not particularly known for it, Woody Allen was an early proponent of mockumentaries. He made both Take the Money and Run in 1969, as well as this movie, before This is Spinal Tap and any of Christopher Guest's movies. Allen could have easily made this a narrative film, but the documentary format works well and is quite clever. Based on some of his films, he's obviously always been a fan of the 1920s and with this movie he gets to revel in it. He must have loved poring through footage of the era so he could be inserted into it.

Also cleverly intertwined into the footage are six original songs by composer Dick Hyman that mimic the style of the era. One of them is even sung by Mae Questel, the voice of Betty Boop.They are so cleverly written that it's difficult to separate them from the actual songs of the 1920s. They definitely add to the feeling of realism that the footage brings. That the footage was put together before the use of computers makes it all the more impressive.

Despite all of the visual and aural trickery, it's the comedy that really makes the movie work. Without the humor, it's just a clever bag of tricks. It's Allen's trademark wit that really makes it entertaining. Eric mentioned my favorite line in the whole script, which is the "It shows what you can do if you’re a total psychotic." line, but there are others, some of which Patrick quoted. Many of them are delivered quite dryly by the narrator, which might be why they went over our teenage heads.

The prolific Woody Allen has produced a wide range of quality in his movies. This isn't his absolute best, but it might just be his cleverest. 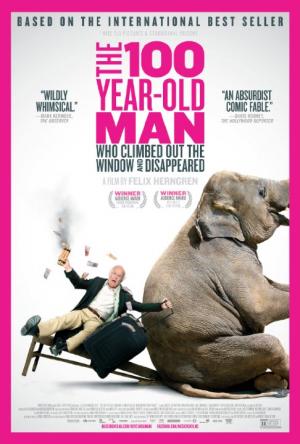