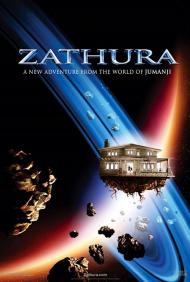 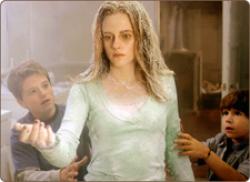 Kristen Stewart, as cold and stiff as always in Zathura.

Zathura was written by Chris Van Allsburg who also wrote The Polar Express. But it is his first screenplay, Jumanji that Zathura steals the most from. As in Jumanji, 2 siblings play a mysterious game that leads to plenty of CGI effect adventures. Jumanji worked because of the talents of Robin Williams, Bonnie Hunt and Kirsten Dunst. Other than Robin's glorified cameo, Zathura has no such casting coup and is left with dull performances, a lifeless plot and stoic direction.

Two brothers, one 6 and one 10 find a game one afternoon in the basement of their father's new home. Their parent's are — surprise, surprise — divorced. The divorce plays not at all into the plot but for some reason it is there. Once they start playing it, all kinds of hell breaks loose. If you have seen Jumanji then you know exactly what to expect. Whereas Jumanji was a jungle game, Zathura has an outer space theme.

Before you know it, their house is in outer space and they have rescued a stranded astronaut. Their house gets attacked by lizard men and their older sister, who has either slept or been frozen most of the movie, finally helps out.

The whole message of the movie is that the brothers learn to get along and appreciate each other. The problem is that it is told from an adult's perspective. The brother's bickering is always whiny and annoying. That is how a parent sees it. A child screams and yells for what he sees as legitimate reasons. Thus the kids in this movie come across as completely bothersome and not at all endearing.

A minor plot twist is supposed to add intrigue but it just confused my sons who were growing very bored with the movie by the time it showed up. Zathura is completely void of humor and its message of brotherly love is handled like a some chick flick on the WE channel.

Save your money and rent Jumanji or Polar Express instead of this snooze fest.