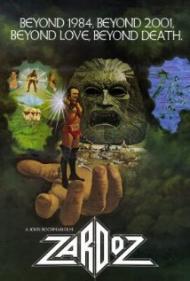 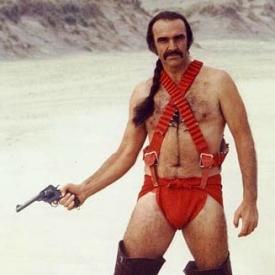 Maybe, just maybe, if Zardoz had been made in any other decade than the 1970s it might have been a decent movie. The premise has possibilities, but the hippy trippy philosophizing and the costumes (good god, the costumes) that could only come from the drug fueled "Me" decade, mar any chance it has of being good. That isn't to say it isn't entertaining. It's been named one of the Best Worst Movies of all time for good reason. Some of it is so bizarre you won't quite believe what you're seeing.

John Boorman, fresh off the success of Deliverance and frustrated by his inability to get his Lord of the Rings movie made, opted to make this dystopian science fiction film instead. He originally wanted his Deliverance star Burt Reynolds for the lead, but when Reynolds proved unavailable, he hired Sean Connery who was looking to prove himself after leaving the James Bond franchise for the second time. If he wanted a part a long way from the stylish, suave super spy, he certainly got one.

The story is set sometime in the far future. The world is a wasteland with just a single pocket of civilization in a force field protected village known as 'the vortex', which is populated by immortals with mental powers known as the Eternals. Outside the vortex live the rest of humanity who are known as Brutals. Above the Brutals are the Brutal Exterminators who rape and kill the other Brutals, while forcing them to grow grain for the Eternals. Hold on, cause here's where it starts to get weird. The Exterminators worship a giant floating head, known as Zardoz, who provides them with guns when it comes to collect the grain. It inspires them to kill with speeches like this, "You have been raised up from Brutality, to kill the Brutals who multiply, and are legion. To this end, Zardoz your God gave you the gift of the Gun. The Gun is good! The Penis is evil! The Penis shoots Seeds, and makes new Life to poison the Earth with a plague of men, as once it was. But the Gun shoots Death and purifies the Earth of the filth of Brutals. Go forth, and kill! Zardoz has spoken."

Connery plays Zed, one of the Exterminators. One day he stows away aboard Zardoz to sneak into the Vortex. Once there he is treated like a curiosity by the residents. Most of them have become apathetic about life, some to the point of near catatonia. Many of them even long for death. Charlotte Rampling is one of the exceptions. She plays Consuella, a stern Eternal who wants Zed put to death. That is until she does a 180 and suddenly decides that she's actually in love with him in the least convincing and fastest change of heart ever put on film. She and May, another Eternal, decide to teach Zed to develop mental powers like their own in one of the movie's many psychedelic scenes. This leads to a violent and bloody climax that I won't give away because trying to explain all the bizarre details would take far too much time.

If there's one thing this movie is really remembered for, it's Connery's costume. He spends the majority of the film wearing thigh high boots, a red diaper, double red bandoliers, and NOTHING else. His hair is long and in a pony tail and his mustache would have made a 1970's porn star proud. To be fair to him, Connery was in good (if hairy) shape. He'd obviously been working out since his last slovenly appearance as Bond in Diamonds Are Forever, but it does little to help him look better. Not even the world's greatest bodybuilder could make this outfit look good. One of the few times he appears in a different costume is when he puts on a wedding dress complete with veil. The girls's costumes leave as little to the imagination, and even less on occasion as they flash some fashionably small 1970's breasts.

Boorman may have been trying to make a statement about the Haves and the Have Nots. He might also have been trying to make an action movie set in a dystopian future. The result is a muddled mess. Maybe he should have hired another writer to help him get his ideas out on paper. And maybe the two of them should have stayed off drugs while they worked on it. Given how bizarre this movie becomes at times, I find it hard to believe it wasn't written while under the influence of something.

It's rare that I recommend a bad movie, but this is one that I am. It's not good and I'll never want to watch it again, but it's one that keeps your attention the first time just because you can't believe what you're seeing at times. 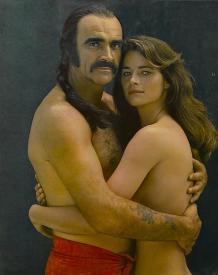 My brothers and I have a routine of choosing films for each other to watch and review. Zardoz was Scott’s pick and I have just one question for him. Why do you hate me? This is one of the worst movies I have ever seen. What the hell was John Boorman thinking and how desperate was Sean Connery to get a role after James Bond?

The movie opens with the giant floating rock head that Scott mentioned. It reminded me of a Rene Magritte painting, except of course that Rene Magritte was a brilliant surrealist and John Boorman was obviously out of his mind.

Okay, okay. Boorman was clearly trying to make a social statement. The apathetic people, how the old are treated and the welfare handing out of the green bread are all obvious analogies. How in the hell though, do you expect any of this to mean anything when it is told in such a pathetic way. Boorman was either under the influence of something or he is merely insane.

Scott, it is my pick next. 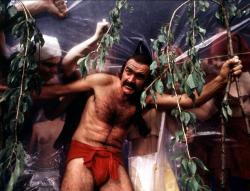 Zardoz borrows ideas from several books and movies. I found influences from Dune, Lost Horizon, The Time Machine, and The Wizard of Oz (which gives the movie its title). I'm sure there are many others as well. Boorman takes these disparate elements and, presumably under the influence of some strong hallucinogenic drug, mixes them together in a manner that can only be described as psychedelic. I can't say I was what you would call entertained exactly by this movie but I was certainly never bored. Watching a film where you have no idea what to expect next is a rare experience and one provided by Zardoz in spades.

You have to give Sean Connery credit. He was game for anything. He really throws himself into the role as evidenced by the fact that he was man enough to wear that ridiculous costume (and his manhood can practically be seen in it). The dialogue is hilarious. One of my favorite lines is when Connery, somehow keeping a straight face, tells someone to, “Stay close to me - inside my aura!”

Near the climax, which if nothing else provides some distracting action from all the pseudo-psycho babble, we learn that Zed (Connery) was bred to be a mutant in order to destroy the Tabernacle (you have to watch movie to know what that is). Zardoz, AKA Arthur Frayn tells Zed, “It was I who led you to the 'Wizard of Oz' book! Ha-hah, it was I who gave you access to the Stone! It was I! I bred you! I led you!” Not to be outdone Zed comes back with this zinger, “And I have looked into the face of the force that put the idea in your mind. You are bred, and led, yourself.” Touché!

Zardoz is a futuristic 1970's freak show. But don't take our word for it. See it for yourself. Oh and Eric, please remember that I didn't pick this movie for you to review.