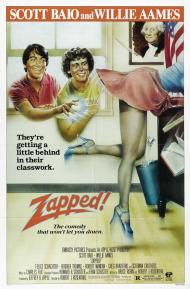 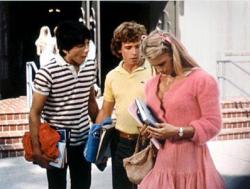 Not too long ago I overheard a couple of college students refer to Raiders of the Lost Ark as an old movie. At the time I was shocked. How could a movie made in my lifetime be considered old? After watching Zapped!, released a year after Raiders, suddenly the idea doesn't seem so preposterous. Somehow when I wasn't looking, the 1980s became old fashioned.

It was when I watched Chronicle earlier this year that I first thought back to Zapped. They both tell the story of a high schooler who develops telekinesis. While in Chronicle they use the power to fly, play practical jokes and defend themselves, in Zapped they mostly use it to see girls naked and to make some money. We had our priorities straight in those days.

The stars of the film are Scott Baio and Willie Ames, fresh off of television's Happy Days and Eight is Enough. If this was to be the movie that launched their big screen career then it failed completely. They would reunite on television for the marginally successful sitcom, Charles in Charge, but neither would recapture the success of their early work. They make an okay team, but the material doesn't exactly give them a chance to shine and neither demonstrates much acting ability, mostly relying on their teen heartthrob status of the time.

Baio plays Barney, a nerdy high school senior who gains the power of telekinesis after an accident in his lab involving a combination of plant fertilizer, cannabis juice and whiskey. He uses his power to hit a home run on the baseball team, pop the buttons off of a couple of girl's shirts and skirts and to help his friend Peyton (Ames) win some bets and some cash. His mother soon thinks that he's possessed, resulting in a spoof of The Exorcist, complete with vomit and a head turning around, although here it's a ventriloquist's dummy.

Barney also finds love with Bernadette (Felice Schachter from the first season of Facts of Life) and loses his virginity. Meanwhile Peyton, with the help of Barney's power and some well placed lies, ends up in bed with the most popular girl in school, played by a young Heather Thomas. All the sex reminded me of how in the 1980s, teen comedies didn't shy away from nudity or sex. Peyton even has sex with a member of staff and it's played for laughs. Keep in mind that the nudity is all of high school students. They're seniors so they might be over 18, but it's never specifically mentioned. Were times more innocent or more decadent then?

There are a few amusing moments scattered throughout, but too many of the jokes induce groans rather than laughs. You can tell that the humor is relying on the audience tittering at the possibility of seeing breasts. Apart from the Exorcist parody, there's also a Star Trek spoof and an ending that's a bit like Carrie, only with breasts instead of pig's blood.

While the first two-thirds of the film contain several brief nude scenes, the finale goes overboard. For reasons I won't bother to go into, Barney disrupts the prom by his usual method, which naturally means making all of the girl's clothes come flying off, something his girlfriend finds inexplicably funny. It's a silly ending to a silly movie.

I don't want to overstress the sex and nudity. There are frequent moments of it, but only in quick flashes. Compared to what you'd see in a comedy today, there's a quite a bit, but compared to what you could see after a two second search online, it's so innocent and brief as to be laughable. The longest sustained nude scene is of two young men's asses who make the mistake of mooning Barney, causing him to leave them, quite literally, hanging out to dry.

The wardrobe, the hair, the props and the cars all look so...I almost said out of fashion, but that's not right. That would be like saying poodle skirts are out of fashion, which they are, but so much so that they've gone from being clothes someone might wear, to becoming costumes someone would only wear to represent that time. Even if, to be fair, the clothes worn in this movie are much more subdued than they would have been five years earlier or five years later, this being set in between the disco 1970s and the day-glo 1980s.

I think I have to admit that those college kids were right. Movies made in the early 1980s are old. The only possible reason to watch this one is for the nostalgia factor. 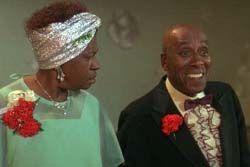 This movie is completely silly, filled with gratuitous nudity, and cheesy special effects.  It provides mindless entertainment and a dash of nostalgia for anyone old enough to have gone to school in the early 1980s. I watched this just a day after watching Real Genius, another 80s comedy about smart students. This movie is much more prurient in its humor than that comparatively mild movie. That one has no nudity while this movie revels in it.

The thing I enjoyed the most was the spoofs of other movies. The Exorcist being the funniest. This just might be the first comedy to feature projectile vomiting as a punchline. Scott Baio at one point impersonates Robert De Niro's famous “You talking to me” speech from Taxi Driver and there is also a slightly more obscure homage to the 1969 Kurt Russell Disney movie The Computer Wore Tennis Shoes. LaWanda page steals a few brief scenes as Scatman Crothers' sassy wife. Many people will remember her as Aunt Esther on television's Sanford and Son.

In the acting department Scott Baio wins out over Willie Aames. At least Baio can convey a specific emotion, while Aames only manages to express a vague uneasiness. He was nominated for a Razzie but somehow lost to Sir Laurence Olivier in Inchon. Go figure.

There are a few mindless laughs to be found in Zapped! I cracked up at the middle-aged couple that Scatman Crothers keeps catching in publicly compromising positions. But overall this is an example of a Hollywood movie attempting to win its audience over through sheer titillation; with heavy emphasis on the tit part.

Other than the nude breasts and drug references, Zapped! seems more like a made for television movie than a theatrical release. The credits, soundtrack, cast and acting “talent” are the kind you would see in a late 1970s television show. The production value is not feature film worthy by any means.

The only cast member with any film pedigree is Scatman Scrothers. Before Zapped!, he appeared in such classic films as The Patsy (1964), Hello, Dolly (1969) Aristocats (1970), Lady Sings the Blues (1972), One Flew Over the Cuckoo's Nest (1975), The Shootists (1976), Silver Streak (1976) and The Shining (1980). In most of those films he had little more than a cameo or a very small role. Here he has one of his larger film parts and his career never recovered. I am not suggesting that this movie killed his career but it sure did not help. Scrothers was given a Star on the Hollywood Walk of Fame on April 8, 1981, one year before this movie came out.

The teen sex comedy Porky’s came out four months prior to this and set a new standard for the genre that Zapped! did not live up to. It is only remembered today by men who had some of their first sexual stirrings as they watched this movie when they were young.

My brothers mentioned that this movie references other films and some of them are a bit old. At the prom, one girl does a Marilyn Monroe, with her hands trying to hold down her skirt from blowing up. Willie Ames then does a Harpo Marx impersonation.

My 20 year old son watched this with me and asked why guys in those days wore such short shorts. He then asked and I answered that I too had cut off jeans in 1982. We all did. His biggest reaction though was from something that Scott wrote about. He was surprised by the nudity, stating that this must have been rated “R” at the time. Sure he can look at all the skin he wants on line but seeing it in a film about high school teenagers was a bit surprising to him. 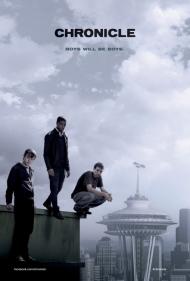