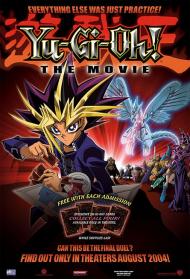 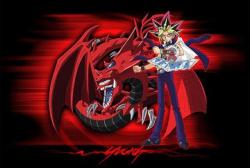 Yu-Gi-Oh! is a movie for fans of the cartoon and popular game only. All others are well advised to stay as far from this movie as possible. Few things put as much fear in me as having my son walk up to me and say; "Dad, do you want to have a duel?" Aaaaayyyyyyy!

Yu-Gi-Oh is a card game, a card game with a zillion rules. Monsters on the cards of the first player do battle with the monsters on the cards of the second. In the movie, the monsters appear and do actual battle. I was disappointed to find out that in real life they do not. The card simply sits there as we compare attack points. Largest wins. Of course, one player may have any number of spell cards that increase his attack points. He may also have a trap card. The other player may have a reverse card. One player may get to summon a monster from his graveyard pile. Again, Aaaaaaaaayyy!

Yugi is a boy who plays this game all the time. He is supposedly a master duelist. Actually, he is just a big cheater pants. Whenever Yugi goes into a duel, an ancient adult spirit takes over and plays the game for him. It also doesn't hurt that Yugi has the three most powerful cards in his hand. Anyway, Yugi unleashes an ancient Egyptian evil, they duel and the credits roll. Okay, a little more than that happens, but only a little.

The animation is the same as the television cartoon, dull. The plot is pointless but the pacing is good. It's only an hour and a half. Drop the kids off for this one and go see The Village. You will thank me.