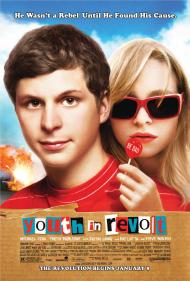 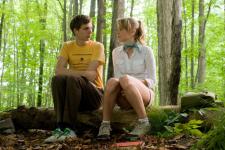 Michael Cera and Portia Doubleday in Youth in Revolt

Youth in Revolt wants to be some kind of quirky, young, romantic comedy, but it fails on almost all levels. The quirkiness seems forced. It's not very romantic and the comedy elicits chuckles instead of real laughs.

Like a million and a half movies before it, the plot involves a nerdy teenager trying to lose his virginity to a girl who's way out of his league. Nick Twisp (Cera) is the nerdy young boy. His parents are divorced and he lives with his mother. While they're on vacation he meets and falls in love with Sheeni Saunders. They both share a love of being pretentious and he quickly falls in lust with her while she never seems more than lukewarm toward him.

After their vacation Nick and Sheeni come up with a plan for him to become such a rebel that his mother won't be able to handle him and he'll be sent to live with his father who lives closer to Sheeni. This brings out the fictitious persona of Francois Dillinger. Francois is the French alter-ego of Nick's who is able to do and say all of the things that Nick can't.

I've yet to figure out what appeal Michael Cera has to audiences. He can only play one character and even that one he doesn't play all that well or originally. He'll be playing the nerdy, dry-witted, sarcastic teenage nerd until he turns 30 when he'll suddenly seem 40. He plays the same part here that he played in Juno, Superbad and even Year One. Oh sure, he tries through the Francois Dillinger character to be hard and rebellious by displaying a different side, but he's still the same Cera, only he swears and smokes as well. He lacks the range to really sell Francois to the audience.

The script tries hard to fill the story with eccentric characters, but they never really gel or create the amount of laughs to justify their inclusion. The always funny Fred Willard is wasted as the neighbor with a habit of harboring illegal aliens. Steve Buscemi and Ray Liotta are there to provide big names in the credits, but their parts could have been played by anyone. And Justin Long is likewise wasted as Sheeni's drug addict brother who shows up at the 11th hour. It just ends up feeling as if the writers were trying too hard.

Likewise, the comedy feels equally forced. There's truly only one laugh out loud moment and that comes near the very end of the film when Nick devises the brilliant plan of driving a car into a lake. Beyond that there are moments that made me chuckle, but far more that left me cold.

For a quirky movie to work, the quirkiness has to feel natural. Here it simply feels tacked on haphazardly to the plot.