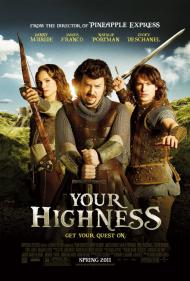 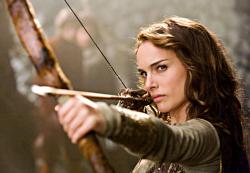 Natalie Portman is the best thing about the unfunny Your Highness.

I expected the humor in this movie to be stupid.  I'd seen the trailers and I knew that this was from the director of Pineapple Express. I can laugh at stupid movies and was completely ready to laugh at some stupid humor. Unfortunately, while there's plenty of stupid, there's very little humor. Every now and then it manages to slip in a chuckle or two, but sadly, most of those moments were given away in the trailer.

Danny McBride stars as Prince Thadeous, the underachieving second son of a Fantasy Kingdom, whose older brother Fabious (Franco), is the hero of the realm. Thadeous is a medieval stoner and slacker who prefers smoking dope and banging wenches to going on quests. When Fabious' bride is kidnapped by evil wizard Leezar however, their father orders Thadeous to accompany Fabious on the quest to rescue her. Thadeous takes along Courtney, his man-servant, and they are joined on the way by Isabel (Portman), a warrior on a quest of her own. It doesn't take long to see why Thadeous doesn't take so well to questing as he proves more of a hindrance than an aid.

The biggest problem with the humor is that approximately 90% of it relies on the audience finding the mere mention of possible gay sex between men to be hilarious. I almost said that it relies on gay jokes, but there aren't really any jokes, merely the mention or implication of gayness. What's really sad is the number of people in the audience with me who did indeed seem to find this incredibly funny. And I don't want to come off as politically correct because I can laugh at jokes that poke fun at just about any group of people, but you have to do more than just name the group that you're poking fun of, you have to actually make a joke about them.

Many of the other jokes involve the use of the word fuck. It's used repeatedly and in various forms. The first couple of times it is mildly amusing to hear it and other modern language in a fantasy setting, but it quickly wears thin.

It really does seem as if the intended audience for the movie is teenage boys, which is a bit ironic since the film is rated R and those are the people who supposedly won't be able to get into see it. But perhaps I'm overestimating the intelligence of older teens and college students, who may be seeing this movie drunk or stoned, which could only help.

Some more sex and nudity might also have helped, or at least made me pay more attention, but there's only one scene with nudity when a bunch of topless women appear, but they don't hang around long enough. Much humor is attempted with a Minotaur's penis (after the Minotaur attempts to have sex with a man, of course), but it's soon beaten into the ground.

Portman is one of the few bright spots in the film and not just because she strips down to a thong in one scene. She almost seems to be in a different movie from the rest of the cast and if you somehow cut the film down to just her scenes you might almost think this was a serious fantasy film.  She's certainly the only one of the American actors who manages to do a decent English accent. She also manages to kick ass in some of the best action scenes. It made me wish that she would make a real fantasy movie.

I was expecting so very little from this movie that it would have taken the barest minimum to exceed those expectations and yet even so I ended up disappointed. I knew it was going to be stupid, but stupidly myself, I also expected it to be funny. Maybe my real mistake was seeing it sober. 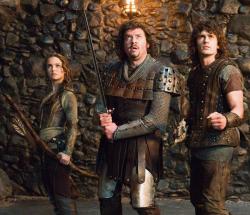 Natalie Portman, Danny McBride and James Franco in Your Highness

Scott missed the point of the "gay" jokes. He wrote that the humor often, "...relies on the audience finding the mere mention of possible gay sex between men to be hilarious." The humor is not in the mentioning but the awkwardness and reaction of the "straight" person in that situation. When James Franco and Danny McBride visit the wise wizard, the joke is not that the wizard is horny for Franco but that Franco does not seem to recognize it. The joke is not McBride kissing him, but McBride not wanting to kiss him. Think of a gay man being uncomfortable in a sexual situation with a woman.

The target audience for Your Highness is young men. So what?  I watched it with my teenage son and we laughed often. Sure, the jokes Danny McBride and Ben Best wrote are not intellectual in the least, but who ever said they had to be.

Swearing can be hilarious in the proper context, such as in the opening narration. Again responding to Scott's review, it is amusing to hear it in a non-traditional setting. When Justin Theroux says to Franco that he is going to abduct Zooey Deschanel, Franco asks, "And just how do you plan on doing that?" Theroux responds, "Magic...Motherfucker."

Many jokes are of a sexual nature, as befitting this film's target audience. After being captured for a sexual ceremony, Deschanel inquires whether or not Theroux's virgin penis will function properly when the important moment comes. Theroux answers,"If your vagina is anything like my hand, there will be no problem."

Not all of the jokes work. McBride falling down the stone steps in a full suit of armor seems old for a Three Stooges's gag, let alone a movie made in 2011. Other jokes are a bit tasteless. Just before raping Deschanel, Theroux tells Franco, "My mothers have already moistened Belladonna for foreplay."