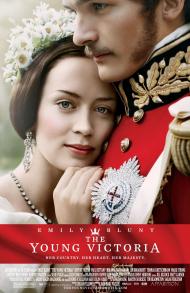 Costume drama as only the Eglish can do it.

No one does royal costume drama like the British. After years of seeing movies featuring Elizabeth the First, finally one comes along about England's longest reigning monarch; Queen Victoria. Although, as the title implies, only her youth is covered in this film.

The plot touches on Victoria's childhood, but only lightly. We learn that she was the niece of the childless King, that her father died before she ever knew him and that her mother fell under the sway of the power-hungry Sir John Conroy who wanted Victoria to make him her Regent. The main thrust of the story though centers on Victoria's first years as Queen.

Young and innocent, Victoria is at first a pawn in the game of politics. Her German relatives want to sway her, as do the political parties in her own country. Two suitors quickly appear in an attempt to woo her. Prime Minister Lord Melbourne soon becomes her favorite and she takes advice from him readily; to the point that it causes a scandal. Albert from Germany though, quietly pursues her as well.

Like most British costume dramas the action is very subdued. This is a movie of manners and morals and drawing room politics with much repressed emotion that only occasionally erupts above the surface. It's Masterpiece Theater done on the big screen with a well known cast and on a larger budget.

At the heart of the film is Emily Blunt's Victoria. Although thinner and more attractive than Victoria is normally depicted, Blunt still manages to play the part regally. She brings the right amount of strength and naivety to the role. It's the kind of part that can push a young actress up a rung on the ladder and bring award nominations.

Visually the movie is a feast for the eyes. The costumes, locations and sets are all magnificently done. Victoria's dresses alone deserve an award. I'm no expert to say whether or not they are authentic and I'm not normally someone who notices such things, but each one she wears is richly colored and elaborate, making them virtually impossible to ignore.

As someone who was only aware of the big picture of Queen Victoria's reign and not the details I would have appreciated a bit more explanation of the political background of the time. It's easy enough to follow the gist of the events of the film, but a bit more historical context would have been helpful. Had it focused exclusively on the love story between Victoria and Albert it might not have mattered quite so much, but the romance (which is very English and repressed) is balanced by political events.

Emily Blunt and Rupert Friend in The Young Victoria

Scott barely gives Albert a mention, but the film is nearly as much his at it is Victoria’s. As the movie starts, Albert is being groomed to seduce and marry her. It is like trying to turn a virgin into a gigolo, only instead of being educated in the beds of many women he has men instructing and quizzing him on Victoria’s likes, dislikes and family history. Once she reveals to him that she is likewise being treated as a pawn, they begin a friendship.

Once the King dies and Victoria is made Queen she immediately asserts herself. She has her bed moved to her own bedroom. Her mother had them share a room. She insists that she walk up and down stairs without her hand being held, which had also been her mother’s rule.

Although drawing room dramatics and political power struggles make up much of the plot, I was more drawn in by the innocent flirtations of Albert and Victoria. She paints his portrait while he talks of helping the poor, and they are both charmed by the others efforts. Only when they are alone together can they forget about the huge political elephants stalking them. They learn that when you do not know who to trust, trust your heart.

When she enters the ballroom following her coronation she appears to float over to Albert as if drawn to him by a power she has no control over. Victoria and Albert are teenagers at this point and their feelings are raw and so very real. Their expressions of love come through hand written letters. Although being pushed and prodded by others, their feelings for each other develop on a surprisingly natural course. The smile she gives him when he eagerly arrives at her invitation says everything.

The Young Victoria is a period piece romance. As Scott wrote, the sets and costumes brilliantly raise the romance factor up a notch. Victoria and Albert are portrayed here as two lovers who find shelter together from the political storms that bang at their doors. They have their good moments and their bad, but history tells us that they went on to have nine children and stayed together until his death at the young age of 42.