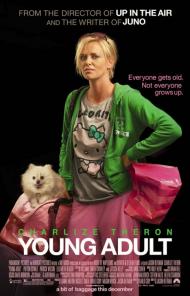 Through the lens of Jason Reitman and from the pen of Diablo Cody comes this rather dark little comedy. Charlize Theron plays Mavis Gary and boy is she a piece of work. She’s a recently divorced writer of tawdry young adult fiction novels. She is also an alcoholic with a habit of passing out in her clothes and/or waking up next to strange men she has picked up in bars. Mavis has the emotional maturity and lifestyle of a college freshman. She blames the world for all her problems and at the same time feels superior to everyone she meets. Theron is brilliant in the part; she walks through her days with a sour expression fixed on her face.

After receiving the news that her high school boyfriend (Wilson) has just become a father she decides to return to her hometown to steal him away from his family. At a bar her first night back she meets another fellow ex-high school classmate named Matt (Oswalt). He is a nerdy little man that lives with his sister, makes home-distilled bourbon and has an extensive collection of Star Wars action figures. He was beaten up badly by a group of jocks in high school. They thought he was gay (he isn’t). And he received permanent damage to his leg and genitalia.

Although Mavis is focused on getting her ex-boyfriend back, we the audience know it is never going to happen. She is just this side of delusional. The movies’ big dramatic scene takes place during the naming ceremony for Buddy and Beth’s baby. Mavis gets slapped in the face with a big ugly dose of reality.

The real emotional core of the story though, is the relationship between Mavis and Matt. She returned to Mercury to win over her ex but she winds up connecting with and helping to heal a guy she barely remembered. Not that she learns anything or matures at all from her adventure home. Mavis is just as screwed up at the end of the movie as she was at the beginning.

The jokes come from Mavis’ totally selfish view of the world. Diablo Cody writes memorable dialogue filled with pop culture references. Mavis, for example, is a fan of the Kardashians and watches their show often. She is rude and condescending to pretty much everyone she meets. Only in her interactions with Matt is she able to let her guard down and open up.

Young Adult is the story of one woman stuck in a certain place in her life. This isn’t your average Hollywood comedy. It has at its center one of the most unlikable of characters and yet Charlize Theron is so good in the role that she nearly does the impossible. She almost makes you care about Mavis Gary. Almost. Young Adult is funny and original. It maintains a consistently cynical tone throughout. I enjoyed it. 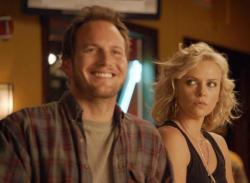 This is definitely not your average Hollywood comedy. It's far, far superior to average. The humor is quite black and I can't remember the last time a lead character was so unsympathetic and unrepentant. Charlize Theron is brilliant indeed, giving a fearless, emotionally packed and yet understated performance as the 37 year old girl who peaked way back in high-school and has been sliding downhill fast ever since, picking up speed as she goes along, barreling with reckless abandon into anyone who gets in her way.

I agree with you Patrick that the heart of the film is the relationship between Mavis and Matt. Mavis' ex-boyfriend Buddy is now a husband and a father. She has nothing in common in with him and in reality doesn't even want him back. What she wants is her youth and he represents that for her. It is with Matt that she finds a kindred spirit. They are both stuck in their high school years by different causes. Matt was physically damaged and bears his scars on the outside. He still lives at home and plays with his action figures. Mavis, whose scars are hidden beneath her perfect veneer, was at her happiest in high-school when all she had to do to succeed and be popular was be her naturally beautiful self. They share a bond because they can relate to each other in a way that Mavis will never be able to relate to Buddy.

As you'd expect from a Diablo Cody script, it is loaded with funny lines and snatches of dialogue. She's matured as a writer though and the lines feel more relaxed and the banter less forced than in Juno. There are still Diabloisms, but they flow more believably. Mavis, who is a failed ghost writer, eavesdrops on teenagers several times, co-opting their slang, and you have to wonder if Cody works in a similar manner. It is her penchant for humor that keeps the movie from becoming too dark.

Reitman's direction is also quite good. The editing is paced differently from your average comedy. There are long pregnant pauses following Theron's zingers, giving you time to laugh with and at her audacity. A different director might have lost the delicate balance needed of both comedy and underlying drama, but Reitman has the perfect touch for it.

Without revealing too much, Reitman and Cody tease the audience with a Hollywood ending. For a very short time it almost seems as if Mavis will change following the film's emotional climax, but thankfully it stays true to itself and everything that came before it.

I didn't just enjoy this movie. I thought it was one of the very best movies of the year and Charlize Theron delivers the performance of her career in it. 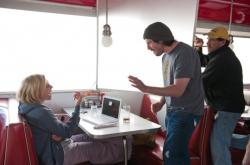 Charlize Theron getting direction from Jason Reitman for Young Adult

Never have I gone to a film based solely on my brothers recommendation and been so bitterly disappointed.  They both call it a dark comedy and while some of the situations are dark I failed to notice much comedy.   The fact Scott, that you call this chick flick one of the years best films concerns me.  Please walk to the nearest mirror, drop your pants and check for a vagina.

There are some good performances here and some interesting things going on, but it worked far better for me as a drama than a comedy.  Mavis is a woman having a middle age crisis.  Her career and love life is a bust.  Finding that her first love is married and just had a child reminds her of her past glory in high school as well as an old secret.   We have seen on film many middle aged men get depressed who turn to their youth or sex with younger women.  Look at Old School or Blame it on Rio.  The most unique aspect of Young Adult is that it is a woman who so desperately wants to be a young adult again.

Although I was bored through much of the film, there were three great moments for me.  The first is the political one where Matt says he was famous after getting beat up because everyone thought it was a hate crime against a homosexual.  Once they found out he was straight the media no longer cared that it was a fat nerdy kid who got his dick damaged.

The funniest scene was when Mavis and Matt run in to her wheelchair bound cousin, Mike.  He is the most optimistic person in the world.  His bright outlook on life sheds  so much light on their self pity that neither can stand to be around him.

The best scene in the film is the one Patrick mentioned, where reality catches up to Mavis.  When Mavis finally lets it all out about what she is up to, we expect Beth and her friends to act one way, when they instead act another.  It is the worst possible reaction Mavis could receive.  It showed that she had no clue just how other people saw her.

Theron does do a great job but I like the direction.  Kudos to Reitman!  He keeps things very real.  I never really laughed at Mavis.  I pitied her like I would pity a homeless person holding a sign along a road.  I recognized a need but I had no desire to really concern myself with someone whose own decisions put them where they are.

Perhaps if my brothers would have talked more about the drama I would have been less disappointed.  Scott pointed out in his review for The American that the trailer set it up to be an action film and my review, written the day of its release, shows I was disappointed with it.  Just as Mavis anticipated getting Buddy back, I now better understand the power and influence of expectations.