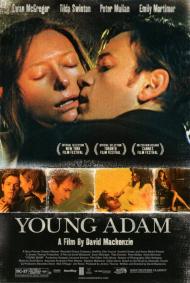 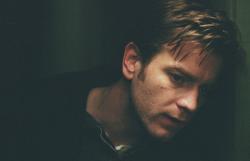 Young Adam features some very talented actors and an intriguing premise. Unfortunately, the pace of this movie is slower than the barge upon which most of the action takes place. If it were edited for time and explicit content, it would make a nice entry in the PBS Mystery series, but as a full-length movie, there are just too many stretches of nothing going on, to keep your attention.

Ewan McGregor plays Joe, a man working on a barge in Scotland in the 1950s. At the beginning of the movie, he finds a dead woman floating in the canal. As he and the Captain of the barge pull the body from the water, it is intimated that perhaps Joe has a connection to her. While the police investigate the incident off camera, as revealed to Joe by newspaper headlines, he begins an affair with the Barge Captain's wife. Flashbacks also reveal some of Joe's past and how he ended up working on a barge.

The movie is beautifully filmed and given a bit of a Film Noir gloss. One interesting shot shows Joe walking towards the back of the barge, as it's moving. Because he is walking the same speed as the barge, it appears as though he's not moving at all, staying level with the same landmark on shore. It's a nice bit of symbolism that here is a man going nowhere. However, as everyone but visually minded directors understand, beautiful images and symbolism, can only enhance a movie, they can't make it entertaining. All the artistry in the world couldn't fill the gaps in the plot here to hold your attention.

When the plot does move, there are some great performances to move it. Ewan broods well and Emily Mortimer does a nice job as Joe's ex-girlfriend. Like visual artistry though, great acting only carries a movie so far.

I wasn't expecting a Hollywood-style action movie from this small Scottish production. It's not that type of film and it shouldn't be. But some more action, either psychological or physical, to move the story along would have helped. 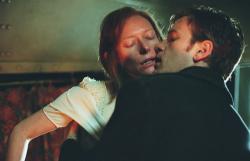 As Scott said this movie features some fine acting and cinematography but falls short in plot and pacing. This is the type of film that probably worked better as a novel. I say this even though I have not read the book by Scottish Beat writer Alexander Trocchi. There just doesn't seem to be enough story to fill a feature length motion picture. And while you can easily fill many pages of a novel with descriptive passages and the inner thoughts and feelings of the characters, these are much more difficult things to convey in the visual medium of film. Young Adam runs just over an hour and a half but watching it feels more like two hours.

If, however, you can overlook the rather tepid speed at which the film unreels you will see some very fine actors portraying uncompromisingly real characters in a vividly recreated setting. Ewen McGregor inhabits the morally ambigious Joe with a real understanding of the complexities of the human heart, and with an ever present cigarette clamped within a cocky half-grin. Tilda Swinton is superb as Ella, the married woman that Joe has the torrid affair with right under her husband's nose. She is one of the most underrated actresses working in film today. Perhaps this is because she is not movie star beautiful, but she can act circles around your average Hollywood starlet.

Still I was hoping for a more compelling story to match the wonderfully realized characters herein. 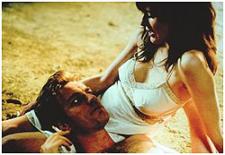 At least the sex scenes kept me awake through it.

Since he is in nearly every scene, Young Adam rests on Ewan’s shoulders, or more accurately his ass, considering how many sex scenes he does. All he has to do to get sex from a woman, is present himself to them. Ewan is not a bad looking guy but he plays Joe as charmless. Just what do all of these ladies see in him? Joe is a bastard and is unapologetic about it. He bed’s wives and allows several deaths to occur that he could have stopped had he an ounce of honor.

Swinton is the Bette Davis of her time. Both stone ugly women could/can play any role with amazing conviction. Ella is a cold, strong willed bitch, who gets what she gives. My favorite part with her is when they have sex, and then the scene switches to her paying Joe his wages. It is for his work on the barge above deck, but the meaning is all to clear.