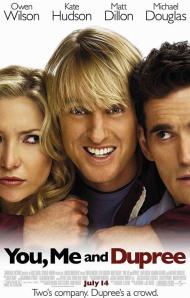 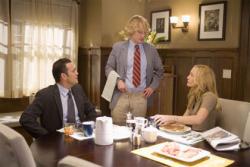 Matt Dillon, Owen Wilson and Kate Hudson in You, Me and Dupree.

Although the previews might lead you to believe that this movie is a romantic comedy, it is really just an opportunity for Owen Wilson to showcase his normal slacker with a heart of gold character. Matt Dillon and Kate Hudson are clearly the co-stars here, both playing straight-man to Wilson's Dupree. It is only because of Wilson's charm that this movie manages to entertain as much as it does, which is just barely enough.

Dillon plays Carl, a man getting married to Molly (played by the cute as ever Hudson). His best man is Dupree (Wilson), a guy in his thirties who can't let go of his twenties. After the wedding and the honeymoon, when Dupree loses his job, his car and his home all in the same day, Carl agrees to let Dupree come stay with him and his new bride. Although at first, Dupree irritates Molly by clogging the downstairs toilet, sleeping nude on the couch and even setting the house on fire, eventually she, along with everyone else, succumbs to Dupree's off-beat charm. But just as everyone else comes to appreciate Dupree, Carl begins to resent his best friend's easy life as Carl faces the responsibility of being a husband and the son in-law of his boss, since Molly's dad (Michael Douglas) owns the company where Carl works.

Dupree charms Carl by reminding him of how he used to be. Dupree charms Molly by being vulnerable and by being around when she needs him. Dupree charms Molly's dad by being someone other than Carl. And lastly, Dupree charms the audience by simply being Owen Wilson. Although Owen's acting brother Luke might be conventionally better looking, it is clear which of the two brothers has the most charisma and it is definitely Owen.

Unfortunately for this movie, as a whole it doesn't have as much charm as its lead character. Dillon is dull as Carl and I was unable to feel sorry for him or even feel much of anything for him. Hudson is cute and she too carries a lot of charisma with her, but isn't really given anything to do in the movie apart from that.

Douglas does manage to illicit a few laughs as the slightly slimy father in-law who, when he finds out that Carl and Molly are considering having children someday, calmly slips Carl some literature on vasectomies.

One thing that bothered me about this movie is the way it represents men as little children whose wives act like their mothers. Are their guys like that in real life? Of course there are, but there are plenty more of us who aren't.

The script is really where the movie is lacking as it wanders all over the place looking for a genre or a style or cohesiveness. If Dupree were a recurring Saturday Night Live character, he could be a funny one. Packaged in bite sized skits, he would be amusing, but there just isn't enough of him to satisfy a full length movie. 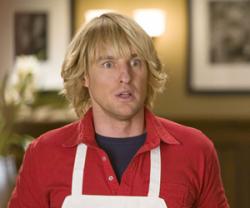 Owen Wilson in You, Me and Dupree.

Dupree is charming in a “pal to party with” kind of way, but a 30 something acting like a teenager borders on retarded. He plays well with kids, so why did he never get a job teaching or working with children. He is a gourmet cook but he never became a chef. Dupree, who never kept a job, ends up being an inspirational speaker. How can a man who never kept a job, advise other people on how to do it? He never felt the stress that they feel so it makes no sense that he would have any insight into what it's like to have a stressful job.

Carl is a contradiction of a character. He takes on the responsibility of being married, working for his father in law and taking care of Dupree. However, he can never find the time to make out some thank you notes.

The charm and heart of this movie is in the fact that both guys need each other. Dupree needs to grow up and Carl needs Dupree for down time. Their personalities compliment each other and it is easy to see how two such guys could be friends. The problem the movie runs into, is that Carl suffers endless amounts of indignities. He is the movie's good guy, yet so much bad stuff gets dumped on him. Dupree sits lonely in the rain in one scene but otherwise waltzes through the film unscathed, even though he deserves absolutely nothing good to happen to him.

The one moment Dupree makes any sense is when he talks to the classroom of children and tells them that they will each mature in their own time. As true as that is, it does not justify being an irresponsible bum in the mean time. You, Me and Dupree tries to make a statement about taking life easy but it seems phoney coming from a man who does not have any responsibilities. 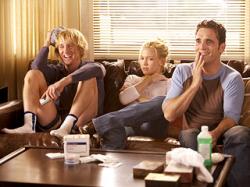 Owen Wilson, Kate Hudson and Matt Dillon in You, Me and Dupree.

I see far fewer new movies than my brothers so I quite often find myself reviewing them several years after their initial release. You, Me and Dupree came out in the summer of 2006. It received mostly negative reviews at the time and I have to say that the ensuing half-a-dozen years have done nothing to improve it. This movie suffers from a split personality. At times it's a bit of a romantic comedy about newlyweds and the tension between Carl and his father-in-law. At other times it's more of a tasteless frat guy comedy with Owen Wilson playing his stock arrested-development, pseudo-zen character. It never really succeeds as either.

Hudson is adorably cute and shows off the great figure she inherited from her mom but, as Scott wrote, she is given very little to do. Michael Douglas has a couple of brief scenes and he makes the most of his few good lines, like the toast he gives at his daughter's wedding, about his son-in-law. “Now when Molly told me that she was going to marry Carl, I said "Who?" She said "Daddy, he works for you." I said, "Honey, I've got 1,200 employees nationwide." But then, I started to worry. Maybe he was some young buck trying to push me aside, grab the reins of my company.” (pause for a sly Michael Douglas grin) “And then I met Carl, sitting in cubicle 26. And I said, "You know, I like my chances."”

Owen Wilson and Matt Dillon get the majority of the screen time. Unfortunately, in Dillon's case, this role only serves to highlight his limitations as a comic actor. Although, to be fair, there really isn't anything else that's original or inspired about You, Me and Dupree. At one point Dupree says to Carl, “Listen, if I got to be the lovable fuckup all my life to win your best friend prize, maybe you should keep your award.” Carl's reply applies to this movie in general. He says simply, “I got news for you Dupree. You're not that lovable.”