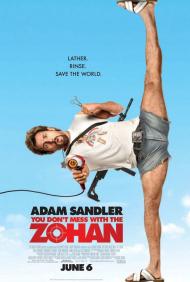 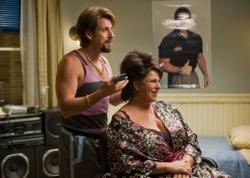 Adam Sandler in You Don't Mess with the Zohan.

Don't Mess With the Zohan. Seriously, don't waste your time or money! This is the stupidest, as well as the most offensive, movie of the year! It looks as if it was written by a twelve year old. Actually, Sandler wrote it. I would not brag about that if I were him.

Zohan is an Israeli counter terrorist agent. Tired of fighting, he decides, through an impossibly elaborate plan that makes no sense whatsoever, to sneak away to New York to become a hair dresser. After failing to get a job at Paul Mitchell's salon he ends up working at a beauty parlor owned by a hot Palestinian chick.

The movie opens with a shot of Zohan's crotch and it never strays to far from it. Nearly every scene feature's Sandler's padded crotch gyrating or being referred to. There is also a running joke about Hummus. Neither gimmick elicits any worthwhile jokes.

Besides being utterly stupid and completely without any real humor, Don't Mess With the Zohan is anti-American, or at the very least, anti-white male American. As is typical in so many of Hollywood's movies, the villain is a rich white guy. The rich white guy hires some plaid wearing, mullet haired white guys to stir up trouble. A caption describes the leader of the rednecks with stuff such as, “Hates blacks, Hates Arabs, Hates Jews, Hates Hilary, Hates Prius, Loves Mel Gibson.” Early upon his arrival in New York, Zohan has a run in with a bigot, who is, of course, a suit wearing white guy.

Sandler pointlessly tries to have a moral about the Israeli/Palestinian conflict. According to the characters in this movie, both sides are at fault. That sounds so kindergarten nice, but when was the last time a man from Israel strapped a bomb to his back, snuck into Palestine and blew up some children? Sandler writing a movie that says Israel (who has given up land in the name of settling the conflict) and Palestine are equal in responsibility over the violence, is like saying France was partially to blame for Germany conquering them in World War II, because of the Treaty of Versailles.

This movie is so scared to call out terrorists that it features a scene where John McEnroe asks why the audience cheered for a known terrorist but not him. Kevin James, sitting next to him, reminds him that he was pretty bad at one time. Yeah, that damn McEnroe's temper tantrums were far worse than anything a terrorist ever did?

Alright, alright, I know this is supposed to be a comedy and for that I can excuse the stupid jokes. However, it tries to say something about all of us just getting along. Then it turns around and has bleeding heart liberal Dave Matthews play a stereotypical redneck bigot. This movie even allows a terrorist to act as a hero, while all of the white American men come across as greedy, stupid or cowardly. I always enjoy paying to be offended. SCREW YOU, ADAM SANDLER! 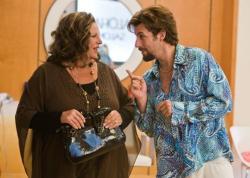 Lainie Kazan and Adam Sandler in You Don't Mess with the Zohan.

Eric, this movie is not anti-American. In fact it is patriotic. It shows that the United States is such a great place that people from all over the world want to come here to start a new life and also that in this country we all get along - even Arabs and Jews. Yes the villains are Caucasian but that fact does not make it anti-American.

I was actually surprised at the heart this movie displays at the end. You don’t expect that from such a low-brow comedy. Yes this movie has plenty of stupid, crotch humor and all of its characters are painted with the broadest strokes possible but I was mindlessly entertained. 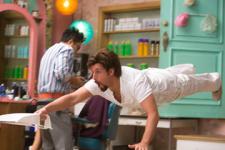 The action is straight out of a cartoon.

Seriously Eric, chill out! This is a fricking Adam Sandler comedy for Christ's sake! How can you even take it seriously enough to be offended?

I think rather than seeming like it was written by a twelve year old, it seems to be written for twelve year olds. The humor here is very low brow and childish, even for an Adam Sandler movie. It's not sophomoric, it's downright elementary.

Having said that, I did laugh a couple of times. I laughed when Zohan tried for a job at the children's salon and tried to calm the children down by describing what would happen if the stylist slipped and cut their jugular veins. And like Patrick I laughed when Zohan's friend's mom showed her ass. Overall though, most of the jokes fall very flat and are just plain cartoony, especially the action scenes. The movie doesn't run that long, but it dragged and felt much longer.

Patrick you mentioned a Mariah scene. To me she just came across like a promotional plug. Her role is like a living product placement and I can't honestly say she added or detracted anything from the movie.

So yeah, this isn't a very good movie, but how anybody could ever be insulted by it is beyond me. It's like if a mentally ill person started yelling and swearing at you. You might not enjoy it, but would you really be insulted?