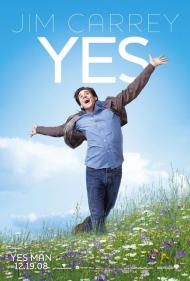 Carl getting helped by his much younger best friends.

Is it just me, or has it been awhile since Jim Carrey has done a “Jim Carrey” type comedy? You know, the kind where he gets to make all kinds of ridiculous faces and voices. Well, apparently he thought so too, because Yes Man is a return to his original star making comic form.

Yes Man finds Carrey playing a depressed, recently divorced bank loan officer. He avoids his friends. He has little inspiration to do anything but sit at home and watch movies alone. One day he runs into an old friend who takes him to an inspirational speaker and he decides to give the speakers mantra of saying, "Yes" to everything a try.

The lesson of the movie being that life is a risk, but you are not really living unless you get out there and face the good as well as the bad. Spontaneity is the spice of life. Where as this movie tries to say something encouraging, the whole plot seems a bit of a retread of Liar Liar, in which Carrey plays a man forced to tell the truth.

The parts where he starts to give high risk loans to everyone seems particularly topical, as the recent bailout of Wall Street was partially due to giving loans to folks who could not pay them back. Thankfully though, the movie stays clear of politics, leaving Carrey to do what he does best. However, the whole movie seems a bit like a throwaway film he whipped together to remind his fans that he still can make us laugh.

This is definitely a lightweight movie, but since it had been a very long time since I saw Liar, Liar I didn't really see it as a retread of that one. Plus, wasn't he compelled somehow to tell the truth in that movie? At least here he has the option of saying no, he just chooses to avoid saying it.

The message of the movie is positive, but rather than it saying that life is a risk, I thought more that it was trying to say that you have to make things happen, they don't just happen to you. You can't avoid life and live it at the same time. Thankfully, while there is a message to this movie, it doesn't bang you over the head with it.

One problem I had is that Carrey seems about 20 years older than the rest of the cast. His girlfriend and his best friend are both much younger than him. To his credit, he still manages to bring his manic energy to the role even at 46 year's of age. The jogging scene after his all night Red Bull binge is a good example and one of the funniest moments in the movie.

Sure, this is a part Carrey could play in his sleep and maybe it was a throwaway movie. It still manages to be entertaining and funny enough so that you won't regret saying yes to watching it.