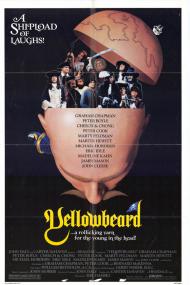 The most notable thing about Yellowbeard is the cast.  It contains many of the Monty Python members, most of the cast of Young Frankenstein, Cheech and Chong and Peter Cook.  It has such old timers as James Mason and Peter Bull, who played the Captain of the Louisa in The African Queen (1951).  For the younger crowd there was Nigel Planer, who was currently starring on the hit BBC show "The Young Ones"  Martin Hewitt had just starred opposite Brooke Shields in Endless Love (1981).

Graham Chapman stars as the pirate Yellowbeard.  After a twenty year prison sentence, he breaks out and goes to the home of a local harlot, Betty played my Madeline Kahn, to find his treasure map. As Betty says, "It's been twenty years since we had a little cuddle, and what do you do? Come in and give me a kiss? No, you rush in and hack a hole in the wall."  She has long since destroyed the map, but only after tattooing it on her son's head, Dan.

Dan may or may not be Yellowbeard's son.  When Yellowbeard asks, "Who's Dan?" Betty replies, "My and probably your son!"   Some of the best jokes pertain to the paternity issue.  In one of my favorite scenes, Yellowbeard says to Dan, "Alright, Dan, if you're my son, prove it. Kill this stupid old bugger!" referring to Lord Lambourn, played by Peter Cook, who says, "Hold your horses..." Dan interjects, "I can't kill him! He brought me up! Just like a father."  Yellowbeard then asks, "Oh, you mean he's beat ya and kicked ya and smashed ya in the teeth?"

The film plays out as a pirate treasure hunt, with galleons, cannon fire and sword fights.  James Mason as Captain Hughes, makes Captain Bligh look like a saint.  His second in command is even named Mr Christian.  There is, of course, a mutiny.  Eric Idle plays a captain of Her Majesties Secret Service, pursuing Yellowbeard and interrogating Betty.

Although it has such a huge cast, the movie belongs to Graham Chapman and Peter Cook, who also wrote the screenplay.  When Betty tries to tell Yellowbeard about Dan, she says, "I'm talking about the fruit of your loins."  Yellowbeard shouts, "Fruit of me loins? I haven't got fruit in me loins! Lice, yes, and proud of 'em, but no fruit!" Cook had such a hilariously subtle way about him.  I cracked up when he drank the poison and dealt with the little flower girl.  The best scenes feature one or both of their characters.

For the U.S. release, the roles of Cheech and Chong were greatly played up, with their faces appearing prominently on the movie poster.   They have a brief scene at the beginning but do not appear again until after the one hour mark.  It is just as well.  They never quite gel with the rest of the cast.   Their roles are thankfully small.

Although the large cast is something to behold, it is also the film's weakness.  For a large amount of screen time, Yellowbeard is given very few lines and screen time.  When he shows up near the end, you realize just how much he was missed.  "Oh, bugger me, you've sodded the whole thing up like the stupid little twerp that you are."  He says to Dan after he interrupts his treasure search.

Yellowbeard has some great moments and some good lines, but it is always the large famous cast that I remember the most.   This was Marty Feldman's final film.   He died on December 2, 1982, from a heart attack, before filming was completed.  Note the scene where his character is killed in the acid pool.  It is clearly played by a different actor. 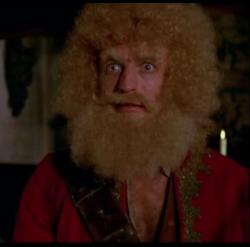 Graham Chapman was born a pirate as Yellowbeard would say, and he got to prove it in the movie of the same name.

John Cleese has said in several interviews that he felt this was the worst movie in which he ever appeared. He's always claimed that he only did it as a favor to Chapman, who was the driving force behind the film. It may have also been for the money, as fellow Python Eric Idle has famously maintained that Cleese would do anything for money, once offering him a Pound if he would shut up, which Cleese took. Idle has also mentioned this as being not one of his favorite movies, but has said that he greatly enjoyed the filming process because it was like a reunion of old friends.

Fellow Monty Python member Terry Gilliam (who doesn't appear in this film) once said that while the rest of the Pythons just made zany and surreal entertainment as their career, Graham Chapman lived that way. Out of all Pythons, he was the one who lived the most rockstar lifestyle and some of his friends were actual rock stars, including Who drummer Keith Moon, who Chapman originally envisioned in the role of Yellowbeard. Moon was also an early investor in the film, although he died long before it went into production.

Because of Chapman's personality and heavy drinking, he was always the least involved in the actual production of Python's films and subsequently had the hardest time launching a successful solo career. Yellowbeard was the biggest project he would undertake before his untimely death of cancer just 6 years after it was released at the much too young age of 48.

I agree Eric that the cast is the most memorable thing. There are several generations of English comics in it. Spike Milligan, the star of The Goon Show and the man who many of the Pythons have acknowledged as the father of their style of humor, has a small part at the court of Queen Anne.  Peter Cook, who was sort of an older brother to the Pythons is quite funny in his small part. Of course there are three of the six Pythons themselves. And then Nigel Planer, who as a member of The Young Ones and The Comic Strip, might be called a child of Python.

The connection between the English comics and the American/Mel Brooks contingent, comes courtesy of the English Marty Feldman, who lost his life during filming. In the 1960s Feldman had worked with Cleese and Chapman on At Last the 1948 Show and other television programs. In 1974 he would appear as Igor in Mel Brooks' Young Frankenstein, where he would work with future Yellowbeard cast mates Madeline Kahn, Peter Boyle and Kenneth Mars. Cheech and Chong, who almost seem to be in a movie of their own, never quite gel with the rest of the cast.

I also agree with you Eric that one of the biggest problems with the film is that despite the title, Yellowbeard himself is absent for most of it. Chapman later complained in interviews that this was  partly due to the rewrites the studio forced on him that moved the focus to the supporting parts, as well as the fact that he wasn't allowed control over the editing process.

Whenever Graham Chapman does appear, he lights up the screen and the movie comes to life. His scenes with Kahn are particularly funny and I wouldn't have minded seeing a movie with just those two as the stars. In his absence there are some amusing moments and Peter Cook is hilarious, often without saying a word (watch him in the scene where James Mason asks if anyone doesn't want to be a member of his crew), but Chapman's absence is keenly felt.

Martin Hewitt is fairly dull as Dan and it is difficult to picture him as the son of Yellowbeard. 80s rocker Adam Ant was originally offered the role, but dropped out. I don't know if he could act, but he would have looked more like a pirate's son at least. When Sting expressed interest in playing Dan, the studio rejected him on the grounds that the cast was becoming too "English" and worried that  it would turn off American audiences.

Fellow Python alums Idle and Cleese provide some moments of amusement and get to share a scene together. The fact that the three Pythons don't all appear together however is practically criminal.

There are many hilarious scenes, but they just don't add up to the classic that it should be given the talent involved. John Cleese truly has a selective memory if he considers this his worst movie ever, given that he's made appearances in The Adventures of Pluto Nash, The Pink Panther 2, Charlie's Angels: Full Throttle, and many other horrible films. It's not as good as it could have been, but for any fan of British comedy, and Monty Python in particular, this is required viewing. 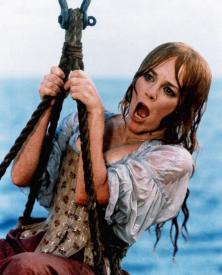 Madeline Kahn gets dunked in the drink in Yellowbeard.

I remember disliking this movie as a 16 year old when I first watched it back in the summer of 83. I was curious as to what my nearly 45 year old self would make of it today. Well it turns out that I still don't like it much. It's rather uneven and the jokes sporadic. In fact this movie proves that just throwing a huge cast of comics together isn't - in itself - enough to make a comedy funny. The script is also very important. Some of the jokes work, but the slapstick - of which there is too much - is pretty awful.

The one thing I remember disliking as a teenager, that I didn't this time around, is the titular pirate. As a kid I found Yellowbeard to be too unlikable. I really couldn't bring myself to root for him at all. Now as an adult, I thought he was the funniest character in the movie, and like my brothers, wish he had been featured in more scenes.

Graham Chapman was a brilliantly funny man. Check out this touching father/son moment. Yellowbeard: “Oh, been out raping, lad?” Dan: “No, I haven't raped her!” Yellowbeard: “No, you wouldn't have you poncy little git! You're not the prawn of my loins, your mother's a bloody liar!” Sure this dialogue is funny but it is Chapman's fearless performance as the ruthless pirate and outrageous line delivery that really sells the joke.

Madeline Kahn is her usual hilarious self as well. Betty gets some of the best lines like, “If there's one thing I've learned, it's learning things never taught me nuthin'. And books is the worst.” There is also a clever exchange between Python members Eric Idle and John Cleese. Cleese as Blind Pew tells Idle's Commander Clement, “I may be blind, but I have acute 'earing.” To which Clement replies, “I'm not interested in your jewelery, cloth eyes.” I also cracked up at the adorable little flower girl when she innocently inquires of Dan, “Will you give me two farthings for a lump of shit?”

Unfortunately the majority of the movie isn't that funny. Yellowbeard runs just about 90 minutes but it feels longer. Cheech and Chong are decidedly unfunny. In fact they bring the humor to a screeching halt whenever they are on the screen. Without their hippie persona’s and minus their stock stoner shtick they just aren't amusing.

I hesitate to call this cast cursed but in addition to Graham Chapman and Marty Feldman both Peter Cook and Madeline Kahn left us too soon. They both died at the age of 57 a few years apart in the 1990s.

Yellowbeard has its moments but everyone involved in this all-star farce made better movies.