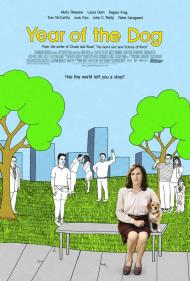 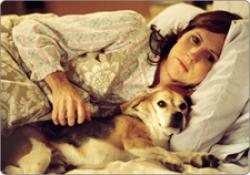 Molly Shannon and Pencil the Beagle, whose death sets the story in motion.

Year of the Dog is a quirky little art house movie with a great cast and a decent script. It is at times amusing and at other times poignant but the blend doesn't always mix well. Half the time it is the expected Molly Shannon style of overt comedy, especially in her scenes with Regina King (who is, by the way, one of the most gifted comic actresses working today). But the rest of the time, and the balance shifts more and more as the movie progresses along, it goes for a serious dramatic tone.

Shannon is Peggy, a relatively content middle-aged single woman. She works in a friendly office, has at least one close girlfriend, and plays silly aunt to her brother's young children. Still the most fulfilling relationship she has is with her beagle Pencil. Pencil's untimely death starts her life spinning in new and extreme directions.

I wish the movie had focused more on its humor because it does have some very funny moments. Besides Shannon and King (who gets the most laughs), Laura Dern is also funny as Peggy's overprotective sister-in-law. In fact the entire cast is good, but they all clearly support Shannon who appears in nearly every scene.

Screenwriter Mike White (Chuck and Buck) makes his directorial debut and though the tone is at times awkward he does manage to treat a polarizing political issue with fairness. Some viewers will identify and agree wholeheartedly with Peggy's evolution from dog lover to animal rights activist, while to others her behavior will reinforce their beliefs that some people are just plain nuts. Everyone in the movie is portrayed as flawed so in that sense it doesn't take sides.

What could have been a classic comedy is instead an emotional movie with some humor thrown in. 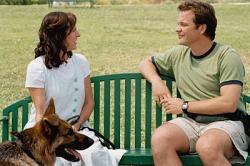 Molly Shannon and Peter Sarsgaard in Year of the Dog.

Year of the Dog, has some funny moments.  Regina King's funniest line is, "Even retarded, crippled people get married."   I liked John C Reilly explaining to Peggy how some hunters travel all over the world to kill endangered species.  "You know, so you can get one before they're all gone."   Peggy becomes a vegan.  "If you couldn't kill it you shouldn't eat it."  She brings in vegan bake goods to work, but no one likes them.

As Patrick wrote, it falls in dramatic quagmires far too often.   Her dog Pencil dies.  She likes Newt but he is a celibate homosexual.  Her brother and his family ramble on about problems that they do not help to resolve.  Peggy decides to be proactive for animal rights.  Peggy finds her calling and purpose in life.

It never gets pious though.  Peggy's new dog bites her.  She leaves it outside and it annoys the neighbor.  She blames him for killing Pencil even though she is the one who let Pencil wander outside.  Her Christmas gifts of saving animals in the name of her relatives elicits laughs from them.

The real problem for me is that the film never decides if it wants to make fun of Peggy and, by extension, animal rights activists or encourage them.   One minute you are laughing at her and the next you're feeling pity for her.   Do you cheer for her when she rescues all the dogs from the humane society or laugh at her?  I guess it depends on where you stand politically. 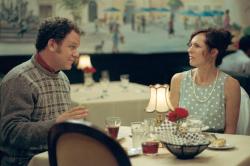 John C. Reilly and Molly Shannon in Year of the Dog.

Perhaps reading both of your reviews before watching this movie helped prepare me for the mixed tone of comedy and drama, because I was less bothered by it than the two of you seem to be. But I do agree that the comedic moments are the best moments and the movie is better able (or least more entertainingly able) to get its point across when it's trying to be funny than when it's trying to be dramatic.

Eric, I don't think the point of the movie is to poke fun of or promote animal rights activists. It's more about how each of us chooses to dedicate our lives and passion. Peggy's passion just happens to be animals. As you mentioned, we see that her efforts aren't saintly or perfect. Her dog bites her. She takes fifteen dogs into her home, which isn't good for her or the dogs. But it is in her love for animals that Peggy finds a purpose when her life is at a very low point.

Very briefly at the end of the film, the camera pans across the office where Peggy works and we see into various people's cubicles. Each of them is decorated with that person's passion in life. One is covered with merchandise for a sports team. Regina King's is covered with photos of her fiancee. Although she takes it to the extreme, Peggy's love of animals is not so very different in spirit than the love the other people in her office have for their chosen passion.

I agree with both of you that Regina King brings some nice comic relief, as does John C. Reilly. I liked that although Reilly's character's hobbies clash completely with Peggy's, he isn't shown to be a villain. In fact, he shows remarkable patience with his eccentric neighbor. Likewise, I second your opinion Patrick that Laura Dern adds some dry humor as the over protective mother.

Molly Shannon delivers a surprisingly strong performance. I knew that she was a gifted comedian, I just didn't know she could deliver drama as well. I empathized with Peggy and wanted her to find happiness.

This isn't a perfect movie, but I did enjoy it. Like its lead character, its heart is in the right place, but a little professional help wouldn't have hurt Peggy or this movie.