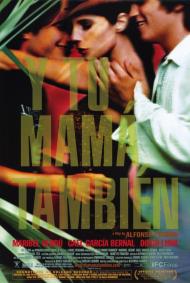 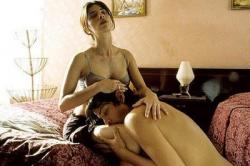 Y tu mamá también translates into English as And Your Mother Too. The title itself has little to actually due with the plot. It is more of a representation of the attitude of the two teenagers featured in this film. Be warned that this review gives away the ending, but to have a decent discussion about this movie it has to be.

At a wedding they run into a distant relatives wife. Both boys are immediately attracted to her. She gets fed up with her husbands affairs and decides to take a road trip with the two boys to a secluded beach. Along the way she ends up having sex with each of them at separate times.

The boys get jealous and inform the other one that they have had sex with the other ones girlfriend. All of this psycho/sexual manipulation is a bit fascinating but the movie decides to throw in a final wrench. At the end of the road trip they have a three way that involves the two boys kissing very passionately while the woman is going down on both of them.

I am not embarrassed to say that I am not sure what the director/writer is trying to say here. Early on he quite obviously shows that these boys are heterosexual. When they each go to have sex with the older woman by themselves they are both so turned on that they cum very quickly. She even comments to that. Is he saying that these boys are bi-sexual. They have all the time in the world to explore that yet it took the woman to bring it out? The last scene is the boys talking to each other a couple years later. They are both in college and have not seen each other since the road trip. Both make a point to tell the other that they currently have a girlfriend, so as to reinterate their heterosexuality. 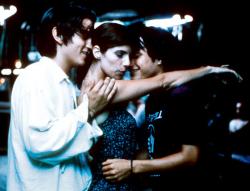 Eric, it’s not that deep. The three-way takes place when both boys (and the woman) are drunk and they simply get caught up in the moment. Luisa clearly eggs them on as well, having made several earlier references to them wanting to fuck each other. These boys are at the age when most sexual experimentation takes place and it often happens when people are drunk or on some mood altering substance that lowers inhibitions.

Clearly Tenoch and Julio are heterosexual. Unfortunately the experience ruins their friendship as they are unable to face each other afterwards. They share each other’s shameful secret and it sours their close bond.

What you didn’t mention Eric was how good the acting by the three main stars is. Although Gael Garcia Bernal would become the biggest star of the trio, both Meribel Verdu and Diego Luna give great performances as well. The scenes where they tell each other about fucking the other’s girlfriends are powerful and very truthfully rendered. Jealousy demands intimate details. Maribel has several scenes on the phone with her philandering husband where she gets very emotional. The ending explains her reckless behavior with the two boys.

The title, by the way, is what Tenoch says to Julio the night of their three-way, meaning that he fucked his mother too.

The interaction between the two friends is interesting. They have their own manifesto for their friendship, one of the rules being not to fuck each other’s girls. Oops. Tenoch comes from money while Julio’s mother is a secretary. Yes they jack off together and make fun of each other’s dicks but that doesn’t make them gay, just uninhibited about their bodies.

This is a very entertaining coming-of-age road-trip movie with a melancholy ending.

I agree with Patrick that the relationship between Julio and Tenoch is pretty straight forward. They're not gay. The earlier scenes when they masturbate simultaneously and poke fun of each other's penises in the shower are simply the antics of two very immature boys for whom the idea of sex and indeed life, is one big game or joke. Their only aim is to find pleasure in everything they do, which is a task for which they have no inhibitions. This movie documents the last summer of their lives where they will ever have a chance to feel that way. The ending, with the three-way sex scene, is an inevitable one that can be seen coming from the beginning. This trip, with its revelations of each of them having slept with the other's girlfriend and the morning after the three-way, marks the first time these boys have ever had to face the consequences of their actions.

Likewise, I agree that the acting is very well done. Bernal and Luna are both very believable as boys on the road to manhood. They are both annoying in their selfishness and yet endearingly likable at the same time. They, along with Verdu, manage to convey humor and drama, without ever dipping into melodrama.

What neither of my brothers mentioned is the underlying theme of class division in Mexico. Tenoch is wealthy, while Julio is poor. As boys, this social difference doesn't really matter, although clearly both boys are aware of this, as is revealed in the voiceover narration and the things that are said in anger. There's a poignant moment also when Tenoch passes through the poor province where the Nanny who raised him and who we see doting on him in an earlier scene, was from. We go from a party early on in the film where the President is a guest, to poor villages where the residents live in squalor. Although it's never explicably said, clearly this difference in their social status is another reason that the boy's friendship was destined to drift apart.

The coming of age story is one of the most overused plot devices in the history of storytelling. Y Tu Mama Tambien is an excellent example of the genre. It packs humor, drama and sex into a road trip of discovery. It's easy to get distracted by the sex, but this movie is about much more than that.