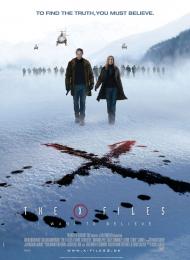 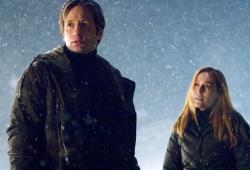 David Duchovny and Gillian Anderson in X-Files: I Want to Believe.

As I write this The X-Files: I want to Believe is sitting at 33% on RottenTomatoes.com, which tells me that 67% of the reviewers of this movie weren't true fans of the original series or were expecting a big-budget summer movie along the lines of the first X-Files feature. The reason I know this to be true is because I don't understand how any true fan of the series, could fail to enjoy seeing Scully and Mulder together again. As for expectations of a big budget film, this is one time where secrecy about the script may have back-fired. Obsessive fans of the show will know from scouring the Internet that this was going to be a smaller movie, more akin to a stand-alone episode of the series than a big epic featuring aliens and the show's well-documented mythology, but more casual viewers might be expecting just that and will be sorely disappointed. This is one movie, with its dark tone and snow filled scenes, that might have been better suited with a fall release-date.

If you tuned into the series finale and remember it from 6 years ago, or watched it more recently, then you'll know that the series ended with Mulder and Scully in a hotel room talking about faith and belief and questions of "Is there more out there then mere science can explain?". The X-Files: I want to Believe picks up that theme and runs with it. While the plot of the movie involves a series of kidnapping, some Frankenstein like surgery and a psychic ex-priest, that's not what the movie is really all about. It's really about an adult couple, Mulder and Scully, working through relationship issues, their past, and what it is they believe in.

It is Scully who is really at the heart of this movie. Mulder is as single-mindedly obsessed with solving a mystery as always, but Scully is filled with questions, and not just about Mulder's crazy beliefs, but about what it is she believes in. While a sub-plot involving her and a young, seemingly incurable, patient of hers, is only tenuously related to the main plot, it is at the crux of her beliefs. Is she performing the risky treatment on her patient because of her belief in God, or in spite of it? Her motivations get further muddied when she acts on the advice of the ex-priest, who is a known pedophile, a man for whom she holds nothing but contempt and disgust.

What makes this movie work is the same thing that made the television series and that is the relationship between Scully and Mulder. Duchovney and Anderson had terrific chemistry during the show's run and it hasn't dimmed in the intervening years. Their passion for each other is very British-like in its repression. These aren't two people whose emotions are on display for all the world to see, you have to be familiar with these two to understand the full meaning of their relationship and the undercurrents that swirl around them.

In several interviews with director and X-Files creator Chris Carter, he has stated that the movie will reward fans without alienating people new to the series. He's right that it does reward longtime fans, with several references to the show and one returning character who pops up near the end to help save the day. He might even be right about not alienating people completely new to the series. The portion of the audience he forgot about though is also the largest portion. I'm talking about those people who are aware of the show, who watched some episodes back when it was THE show to watch in the '90s, those people who know Scully and Mulder as pop-culture characters, but who were never really true fans. Those are the people who only thought of The X-Files as that show about aliens instead of an intelligent drama and those are the 67% writing rotten reviews on RottenTomatoes.com.

Does the fact that I am such a fan of the show cloud my judgement in writing this review? Is this a review of the film at all, or just a way for me to lash out at those people attacking something that I love? The answer to the first question is, probably yes and I'll leave it to you to answer the second. 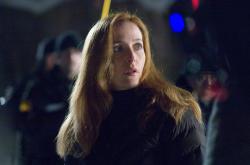 I fall smack into the category of people that know Mulder and Scully as pop culture icons but could not give you the plot of any one episode of the series. I saw a handful of shows way back in the 1990s and I did see the first movie (although I have to admit that my memory of it is hazy at best). I was therefore unsure if it made any sense for me to watch I Want to Believe. I thought perhaps the movie would be so filled with references to the character’s pasts or that the show’s famously enigmatic plot devices would make it so difficult to follow that it would be a huge waste of my time.

I needn’t have worried as this movie stands just fine on its own. Sure knowing more details about the history of Mulder and Scully’s relationship would undoubtedly have added some depth to my enjoyment, but the truth is these two characters are so well-defined and brilliantly acted that I was able to jump right in and be thoroughly entertained.

As Scott wrote the plot is pretty low key. Mulder and Scully, in a snowy Virginian setting, mostly (it seems) at night, reunite to find a missing FBI agent with the assistance of a purportedly clairvoyant, registered sex-offender priest. There are no big special effects or over-the-top action sequences. Instead we have a thought provoking movie about beliefs and the risks and rewards of persevering in the face of enormous doubt. It raises questions about redemption and the nature of evil, particularly through the character of the pedophile priest who may or may not have psychic abilities.

I was most impressed with the performance of Gillian Anderson. She is a very talented actress. Why has she not become a bigger movie star? Did this part typecast her and hurt her career? At any rate she gives a finely nuanced and emotionally charged turn as the ex-FBI agent turned doctor. Duchovny, for his part, has the less showy role but he makes the perfect partner for Anderson to play off of. This movie is a beautiful duet between two classic characters. 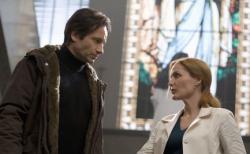 I agree Scott, the relationship between Mulder and Scully is unique to films.  They clearly love and respect each other.  They are not in the newlywed stage of lots of sex and passion.  They are not an old bitter couple staying together out of convenience.  They are in a "marriage" of their own design.  They know each other in ways no one else does, or ever could.  They do not always agree, yet respect each others opinion.  They constantly force the other to try to see things from a different perspective.  It is an odd yet extremely healthy relationship.

Patrick praised Gillian Anderson's performance, and she does carry the film.  This is clearly Dana Scully's movie.  Although Mulder plays heavy in solving the mystery, it is Scully who has the emotional story arc.  She questions all that goes on around her, yet constantly finds herself doubting her own views.   The ending finds her wondering if she is not so different than the men they are after.

Although it takes place in Virginia, I Want to Believe was filmed in Canada.  Anyone who has ever lived in a snowy climate can always tell when fake snow is substituted for the real thing.  Although this film does not have special effects, it was at least mostly film outside in actual snow and not in some studio with soap flakes.  Special effects can be amazing, but nothing beats the real thing.

As Scott mentioned, this was not a blockbuster of a film.  As far as I know, there are no plans for anymore installments.  It is too bad, as this is a well written story, even though it runs a tad too long.  I certainly would not mind having another visit with Mulder and Scully. 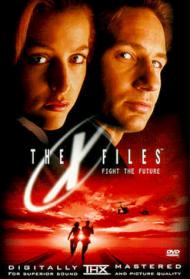