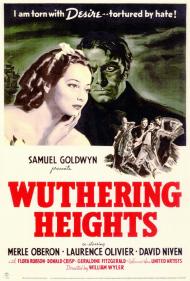 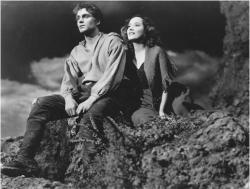 When twenty-nine year old Emily Brontë realized the publication of her gothic novel 'Wuthering Heights' in 1847 she had no way of knowing that her characters, the tragic lovers Heathcliff and Catherine, would translate so magically to the silver screen. Still, I hope she rests assured that they do, in the more than capable hands of the devilishly- handsome Laurence Olivier and the ghostly-beautiful Merle Oberon. With William Wyler directing with masterful strokes – creating the perfect stark black and white images of the bleak, windswept moors that play such an integral part in the story, and the brilliantly condensed screenplay that really only tells the first half of the novel and gently romanticizes the ending – it is no wonder that this is a cinematic masterpiece.

A stranger stumbles half-frozen into an old stone house on the English moors during a snowstorm and after an eerie late-night encounter with a female ghost, is regaled with its story by the elderly housekeeper. Some thirty years before, a Mr. Earnshaw returns from a trip to Liverpool with a dark-haired, very dirty young street urchin in tow. Earnshaw's son Hindley immediately despises the boy – Heathcliff as he is called, as completely as sister Catherine grows to love him. As they grow older Heathcliff and Cathy spend many carefree hours pretending to be a prince and princess in their imaginary castle on the moors near Peniston Crag. As their bliss together increases so does the brutal mistreatment of Heathcliff by Hindley. And after the death of Mr. Earnshaw, Hindley immediately relegates Heathcliff to a mistreated, stable boy.

One day, the now nearly grown up lovers are out on their precious moors when Cathy hears the sound of music playing. They follow the melody to its source, an elegant party at Thrushcross Grange, nearby home of the wealthy and educated Lintons. The lives of Edgar Linton (David Niven) and his sister Isabella (Geraldine Fitzgerald) will never be the same after their encounter with the tempestuous and tormented pair. From here the drama never wavers until the credits roll.

This movie is Shakespearian in the intensity of its characters emotions. This makes Olivier perfect in the role, since it is loaded with hammy, melodramatic lines such as when Heathcliff screams to Cathy's ghost, “Haunt me, then! Haunt your murderer! Take any form! Drive me mad! I cannot live without my life! I cannot die without my soul!" In such glorious company Merle Oberan easily holds her own. Who, that has heard it, can forget her bewildered, wide-eyed statement, “I am Heathcliff."

It isn't just the two stars that make this movie so memorable.  The supporting players all give fine performances as well.  David Niven is perfect for the role of the quietly noble Edgar, getting his pride bulldozed by the single-minded intensity of Heathcliff's love for Cathy. Geraldine Fitzgerald brings a steady intelligence to the pathetically tragic Isabella, desperate for Heathcliff's love; but he can think only of Cathy and asks Isabella in a forlorn voice, 'Why doesn't your hair smell of heather?'

The exceptional cast is rounded out with Flora Robson as the housekeeper and storyteller Ellen Dean, the stalwart Donald Crisp as Dr. Kenneth and Leo G. Carroll as the muttering servant Joseph.

In my opinion, Wuthering Heights is one of the best book-to-movie translations ever created, and, indeed, the AFI included it on their list of the One Hundred Greatest American Films. It makes me wonder if perhaps Emily Brontë did see the future more clearly than the rest of us.