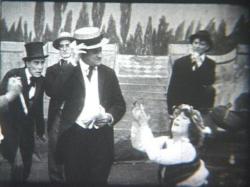 Victor Moore and cast in The Wrong Mr. Fox.

Victor Moore stars in this Klever Komedy. He plays Mr. Fox, a not so good actor. After being rejected for a part he throws his lucky horseshoe out the window and attempts suicide by breathing in the gas line in his room. The landlady shows up and stops him. He gets a letter from his agent telling him he has a job in Vermont. Mr. Fox heads off to his new gig. Meanwhile a Reverend Fox is on his way to his new congregation.

Wouldn’t you know it that the two Mr. Fox’s end up in the wrong cities at each other’s jobs. The Reverend Fox is greeted by actors and rushed onstage for rehearsal. When an actor pulls a knife on him he runs out in terror. Our Mr. Fox is likewise greeted by his new parishioners. Unlike the Reverend Fox he soon realizes what has happened and decides to take advantage of the situation.

The final scene at the church is downright hilarious. Mr. Fox decides to do his old bicycle routine for his congregation. First he takes up the collection. Then he gestures left and right and gets the entire congregation looking in whichever direction he points. While they are thusly preoccupied he slips the offering into his pockets. The sight gag of the church full of people leaning left and right in unison holds up well.

The kicker comes when Mr. Fox proceeds to strip down to some black circus tights and ride his bike in a circle around the church alter. He then makes his escape down the center isle and out the door. The ending shows him realizing he has left the money in his suit at the church. This final scene is a silly and funny sight gag in an amusing silent comedy that holds up well even today. 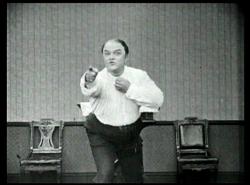 Many people are familiar with the big names of silent films, Chaplin, Keaton, Lloyd, Pickford, Valentino and Swanson. However, there must be thousands of surviving silent films featuring actors who only students of the period are familiar with. The Wrong Mr. Fox is one such film.

Although, to be fair, Victor Moore, the star of this short, had a very long career and even if you've never heard of him, you've probably seen him in something. His movie career stretched from 1915 to 1955. His very last movie appearance was as the plumber charged with getting Marilyn Monroe's toe unstuck from the faucet in The Seven Year Itch.

Clearly Patrick we have different ideas of what is hilarious. This short is mildly amusing at best. The set up is flimsy and dependent on neither Fox noticing that they traveling to the wrong state. It all builds up to Mr. Fox giving the sermon, but even that is a bit of a letdown. He directs the congregation to look left and right, but the reason for them doing it isn't spelled out and they hold the "look to the side" pose a little too long for it to seem genuine. Even the climax, where Mr. Fox bikes out of the church feels contrived. Why didn't he simply finish the sermon and take the money with him when the services were over?

This short doesn't hold up that well today at all and given the quality of comedy being put out by Chaplin and Fatty Arbuckle at the time this short was made, I find it hard to believe it was thought to be all that funny then. 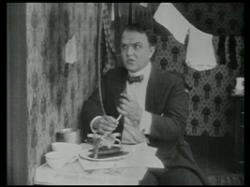 As Scott wrote, this short film does not hold up today. I found it, at most, very mildly amusing. The plot gimmick of mistaken identity is as old as a silent film. The main character is unlikable. He steals from a church congregation of all things. As he rode away from the church he should have been hit by a train. That I would have laughed at.

I found one thing of interest that caused me to smile. When he arrives in town and is shown a place to eat, he says, "Is this the hash house? I'll bet the feed is punk." I have no idea what "punk" meant in 1917 but judging by everyone else's reaction, it was not completely proper. This guy is clearly shifty. He turns to the young lady helping to show him around and says suggestively, "I'll bet you and I could do a fine act." For a silent film, the dialogue was the film's best aspect.

The Wrong Mr. Fox is a dated little film that works more as a time capsule than an entertaining one. Patrick must have been smoking something good if he found it hilarious.