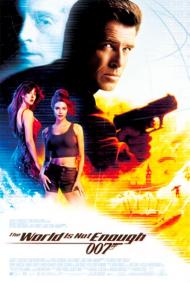 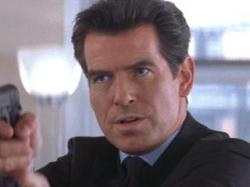 Pierce Brosnan in The World is Not Enough.

The World Is Not Enough is Pierce Brosnan's best performance as James Bond. It has one of the most original Bond plots. Yet, it retains most of the Bond traditions.

Bond is assigned to protect oil heiress Elektra King. Some one has recently murdered her father and some one is out to kill her as well. Bond of course becomes her lover as well as her guardian.

The traditional opening teaser is one of the best. Bond chases an assassin through the river Thames. She is in a regular high speed, speed boat, while James has "borrowed" a one man jet propelled boat from Q. Not only is this an exciting fast paced teaser, it also is integral to the plot.

One of the most unique things about this movie is that James actually gets bested at his own game. That is to say, he gets blinded by emotions and nearly fails because of it. It almost seems to put Bond out of character. Yet it is also what Brosnan's 007 is all about. Connery was a cocky, horn dog chauvinist Bond. Moore was the over the top, not to be taken serious Bond. Brosnan is the sensitive Bond. He gets emotionally attached to his women.

Even though Brosnan has established "his" Bond, the bit players seem a bit unsteady. Judi Dench as M is wrong. I know she has won an Oscar and all that, but she too often comes off as a bitter old bag. The original M was mostly just in one or two scenes. In this movie M has a rather large part. She gets captured and Bond has to save her. She is "M" for Queen's sake. She falls for a trap so easily that she might as well just be a home maker instead of in charge of the British secret service.

One of the small changes that really work is the addition of John Cleese. Cleese plays Q's assistant R. His screen time is limited but he makes the most of it. Q, does a rather prophetic exit scene in this movie while talking to Bond. Desmond Llewelyn would die before the next Bond film is made.

Curvaceous Denise Richards plays an American rocket scientist named Christmas Jones. Sophie Marceau as Elektra is her polar opposite. Marceau, the chic European, does all the emotional scenes with Bond while the casual American, Richards, gets all the action scenes.

This Bond movie is tense, exciting and intriguing. With this movie Brosnan has made this character his own. The old traditions are here, yet Brosnan brings a new level of humanity to Bond. 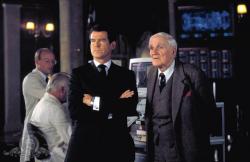 Pierce Brosnan and Desmond Llewelyn in The World is Not Enought.

Unlike my brothers I have never been a huge fan of the James Bond movies. In fact, to date, I have seen just three of them in theaters, including The World is not Enough with Pierce Brosnan as OO7.

I suppose, as far as the genre goes, that this one is a decent enough entry in the series and Pierce Brosnan is definitely the best Bond since Sean Connery. What I didn't like about this one was the fact that they turned this suavely macho icon of sophisticated manhood into a sensitive, modern, politically correct, sanitized hero. Why would anyone want to watch these new inferior versions when the original series of movies from the sixties are so much better? Give me a Bond with Balls, baby.

I agree with Eric that Judi Dench is miscast and that John Cleese is a welcome addition. The World is Not Enough will also be remembered poignantly as Desmond Llewelyn's last go round as Q.

They should set the next movie back fifty years in time and let "Bond, James Bond", be his old chauvinistic, martini swilling self. I am, after all, due for another go-round with the series sometime in the next seven years. 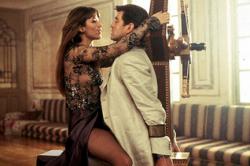 Sophie Marceau and Pierce Brosnan in The World is Not Enough.

I have to disagree with Eric that this is Pierce Brosnan's best entry in the Bond series.  I still favor his Goldeneye debut over any of his subsequent films, although he's right when he says that he has eased into the character more by this film.  And clearly Brosnan is second only to Sean Connery in his portrayal of 007.

Apart from that, I find myself in almost complete agreement with both of my brother's reviews.  While I don't find anything wrong with Judi Dench per se, it is ridiculous that she is allowed to be captured.  I would assume that a compromised head of the Secret Service would be quietly retired rather than being allowed to continue as chief, yet we hear of no consequences of her capture in later films.

This movie does depart from the old Bond formula.  It doesn't end with the villains hi-tech lair being blown-up.  The bad guys have a motive beyond world domination.  And for the first time in Bond history, the lead villain turns out to be a woman.  Talk about bringing the movies into the 90's!

On a final note, I have to echo Patrick's comment when he says they should set the next movie back fifty years.  I've long thought that someone, the BBC or HBO, should put together a television series with a high production budget, that is actually based upon the original Bond books.  Without the pressure for bigger, better, and more elaborate that the big-screen version requires, we could finally see the Bond of the books leap off the page.

What it comes down to is the same thing every Bond comes down to; if you're a fan of the genre, than you'll enjoy this movie, which is easily one of the top ten Bond films.