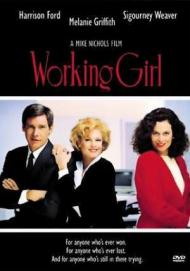 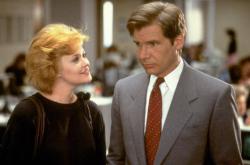 Working Girl at first seems like just a chick flick. Its plot of a girl making it in the world of high finance and finding love along the way certainly seems like a plot for a movie on a woman's cable channel. However, Working Girl stands above nearly all other chick flicks because of the main character, Tess, being strong willed and not some whiny victim of shallow men.

The movie starts out in familiar chick flick territory. Tess gets set up for an interview by her male boss. The interview ends up being an arranged sexual rendevous. Tess quits and moves on to another job, working for a woman. At first she thinks all will be fine, because she assumes she can trust a female boss. She soon learns otherwise. She also catches her boyfriend having an affair.

The greatness of Working Girl is that Tess does not just bitch and whine about her circumstance. She picks herself up and sets about making her mark, despite of her many set backs. She ends up teaming with Jack, her boss's boyfriend. They form a partnership and fall in love. They each have a great line when they first meet. Ford says, "You're the first woman I've seen in one of these things that dresses like a woman, not like a woman thinks a man would dress if he was a woman." Griffith later says, "I have a head for business and a bod for sin. Is there anything wrong with that?"

Working Girl is loaded with great lines. When Tess's friend finds an expensive dress she exclaims, "Six thousand dollars? It's not even leather!" At one point Tess's boss kisses up to a colleague, then says to Tess, "Never burn bridges. Today's junior prick, tomorrow's senior partner." The real heart of the movie, though, lies in Tess making such comments as, "You can bend the rules plenty once you get to the top, but not while you're trying to get there. And if you're someone like me, you can't get there without bending the rules."and "No, I'm trying to make it better! I'm not gonna spend the rest of my life working my ass off and getting nowhere just because I followed rules that I had nothing to do with setting up, OK?"

This movie has an amazing cast. It was the first time I recognized Weaver's comic talent. It is the only supporting role Harrison Ford ever did since becoming a star. Almost every small role is played by a recognizable face. It is, however, Griffith's performance that holds the movie together. She plays "common" better than anyone.

Working Girl is a great story about an underdog who makes it on her own talent and determination. Most chick flicks, like The Devil Wears Prada and Mona Lisa Smile show girls as whiny victims. Watch Working Girl and you realize that you are only a victim if you allow yourself to be.