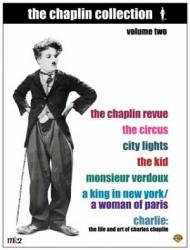 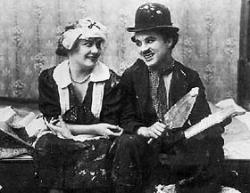 The movie opens with the Ford family, living at the corner of Easy Street and Hardluck Avenue, starting their day. The irate husband demands his breakfast as the wife hurries the maid. Next we see Charlie pulling a cart down the middle of a street. It is loaded with ladders, pails and other equipment as well as his boss. They are on their way to the Ford house to do some wall papering.

Along the way they have several misadventures including a couple of near misses with a trolley car and Chaplin falls into an open manhole. His boss offers a ride to a friend and Charlie has to pull the heavy load up a steep hill. Once there, of course Charlie makes a complete mess of the job and manages to flirt with the maid (Chaplin regular Edna Purviance).

Some of the gags drag on a bit too long and the movie runs out of steam after a while, but Chaplin’s Little Tramp was just so damn likable that he keeps your attention. Chaplin’s movies were all about watching his reactions to the often cruel world and the circumstances he finds himself in.

These early comedy shorts were like silent sitcoms. Chaplin’s one and two reelers could have been titled “The Adventures of the Little Tramp”. Using that analogy, Work is a lesser episode in the series. There is one particularly good moment near the end where the little tramp tells his “sad story” to the maid. It is indicative of Chaplin’s uncanny ability to combine humor and pathos in the same scene. The movie culminates with the arrival of the wife’s secret lover, which leads to an exciting action filled finale. 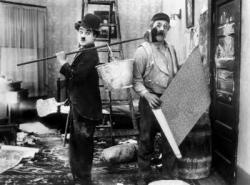 Patrick wrote, "Chaplin’s movies were all about watching his reactions to the often cruel world and the circumstances he finds himself in."  In Charlie Chaplin's better films that is the case.  However, that rule does not apply in Work, where Chaplin makes the messes.  He paints, spills, and throws the glue everywhere.  He is a victim of his own carelessness, not someone else's.

Although some of Chaplin's early shorts were hysterical, like The Militant Suffragette,  he seemed to get better as he went on.  Work is one of his lesser entertaining films.  The problem was his direction.  It seems as if he told the rest of the cast to just stand there and react to him doing all the work.   The other wall paper guy does nothing but get painted by Chaplin.  Edna simply endures Chaplin flirting with her.  The husband and wife spend most of their time reacting to the stove exploding over and over again.  Patrick was right.  Some jokes never seem to end.

Chaplin once again employs his standard amount of butt jokes.  Edna tickles his butt with a duster.  Someone gets kicked in the butt.  Someone gets shot in the butt.  None of the "jokes" really stand out.  The idea of an idiot messing up a house may have been fairly unique in 1915, but it has been done much better in other shorts.  Check out any number of Three Stooges shorts for better examples.  One of their best being  A Plumbing We Will Go (1940).

Watching this film, I realize what a vast difference there is between a Chaplin and a Buster Keaton short.  Chaplin worked his one character for all it was worth.  Think about any of his films and the one thought that keeps coming to mind is of the Tramp.  Think of a Keaton film and you think of a stunt, a special effect or a sequence.  Chaplin created the most memorable film character the world has ever seen, but Keaton was far more creative.  A Chaplin short could have been made in a day or two.  Keaton clearly had to put more work into his.

I am not trying to deny Chaplin's talent, but I am pointing out that in his short films he sometimes seemed to rely on merely himself acting up for twenty minutes and calling it a movie.  Some had next to no plot.  The more I see of them the more I understand that Chaplin got better with age.  His legend was started here, but solidified by his later work. 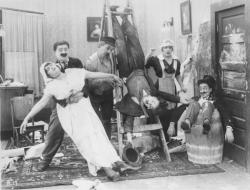 A lot of these early shorts feel as those they're kid's movies. Maybe that's because general audiences in 1915 had the equivalent movie watching sophistication of a small child today. Certainly your  average five year old today has already seen more movies and television show than most adults had seen in 1915. In any case, the humor in this short--what there is of it--is most decidedly best enjoyed if you're a small child.

The jokes as you both said, do drag on for too long. Chaplin really milks them. If he'd kept the same number of jokes, but edited the whole thing down to about 10 minutes it would have been much more enjoyable. Along with the unsophistication of the audiences, I think this is a reflection of the unsophistication of Chaplin and other filmmaker's of the period. They were still learning comedy timing for movies without the aid of an audience's reaction to tell them how long to keep a joke going.

Although the humor isn't the strongest, Chaplin still shows some acting talent. He had such a natural manner with subtle movements like when he tips his hat at the little statuette and quietly nudges it away from him when the lady of the house enters the room as if he's worried that she might think that he might steal or break it. The rest of the cast overacts badly however, with the husband being particularly guilty doing the worst sorts of double takes and reaction shots whenever something explodes or makes a sudden noise.

One scene stood out oddly to me. Near the beginning when Chaplin is toiling up the hill, towing his boss behind him, the scene is shot from down low and Chaplin is silhouetted against the sky. It struck me as very reminiscent of the famous scene in The Seventh Seal when Death is leading a group of people and the scene is similarly set up and framed.  Was Bergman a fan of Chaplin? Or was I just so bored by this short that I started seeing connections that weren't really there.