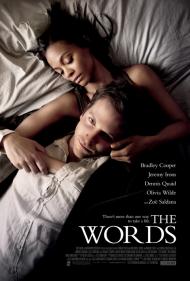 Bradley Cooper and Jeremy Irons in The Words.

The Words is a romantic drama that is neither romantic nor dramatic. It tells a story with several layers that get revealed as the movie goes along. The central plot concerns a young writer that plagiarizes the work of another author, thereby achieving great acclaim. He must then deal with the consequences of his decision when the actual author mysteriously shows up one day. The story is told as a novel within a novel, and there are three separate sets of characters.

The Words is filled with trite, clichéd dialogue and hackneyed writing that badly imitates Hemingway. This is particularly bothersome since the central story is a novel that is being read aloud by its author (Quaid). To demonstrate just how bad the writing gets, it actually includes the phrase, “The words poured out of him” to describe a character in the book as he's furiously pecking away at a typewriter. For further proof of how bad the writing is see the tagline above.

Actually it is nowhere near as complicated or interesting as that sounds. In fact the premise is the best thing about the movie. It badly needed a better script with a more compelling storyline. Even with three separate couples' lives in play, nothing much really happens. There is no big emotional payoff and everything that occurs can be seen coming from miles away.

And then there is Bradley Cooper. How is this guy getting starring roles in movies? He lacks any noticeable acting ability and he's not even that attractive. Sure in some scenes he manages to cry, complete with puffy red eyes and tears, but it all seems to be taking place on the surface only. Although to be fair the script writes him inconsistently. At one point an agent tells him he has talent but his writing is too “lnternal” and “literary” for the public at large. Then for the rest of the movie he is portrayed as a hack who made it solely on the talents of another man.

Dennis Quaid and Jeremy Irons fare better. Quaid plays a slightly smarmy celebrity author to perfection. He's an aging Lothario using his fame to get laid. Irons, as The Old Man, is easily the most interesting character in the bunch. Sure he's a walking cliché of an aging enigmatic man of letters, right down to the faraway, melancholy look in his eyes, the constant cigarette held between his teeth, and the affectation of a walking stick. Still, he was the only one in the movie I wanted to know more about.

Each of the three male actors has a woman to play off of. Of the three only Zoe Saldana gets any real screen time. They are here merely to support the men's stories, not to have their own stories told.

The Words wants to be clever, well-wrought, and romantic. It is none of the three. 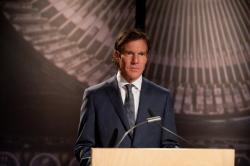 Dennis Quaid in The Words.

There are three layers to this story, as Patrick indicated, with each deeper layer becoming less interesting than the one above it. There's barely enough going on here for one story, let alone three.

Dennis Quaid frames the whole things as the successful, if slightly smarmy, author, who may or may not be telling his own story. He's as saddled with poor dialogue as the rest of the cast, but he's talented enough to sell it. He manages to make lines like, "Fiction and real life are very close, but they never touch." sound as if they might mean something. He manages to create the only character in the story with any depth, where you're not sure exactly what's going on inside his head.

Patrick is a little harsh on Cooper, although I agree he does nothing great here. I wouldn't say he lacks any noticeable acting ability, but his forte is definitely playing lighter roles, such as his part in The Hangover films. The weakness in his portion of the story has much more to do with the script than it does his performance, which is at the very least, adequate. Irons does out act him, but with a very stagey performance.

The final story, the novel within the novel, does come across as something an earnest college student might write after overdosing on Hemingway and Fitzgerald. The Hemingway nod may be because the initial idea, that of an author's wife losing his manuscript actually happened to Hemingway early in his career. Despite the melodrama of a death of a child, I was never emotionally invested in this portion of the story at all.

Any movie with the literary pretensions of this one needed better writing than this. Its screenwriters are the writers of Tron: Legacy, which was a decent enough movie, but not exactly the resume of literary giants.

This is a movie with an interesting idea, but does nothing with it. 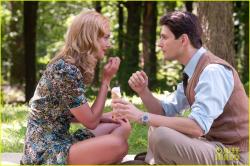 Nora Arnezeder and Ben Barnes in The Words

Scott wrote that the novel within the novel concept comes across as something an earnest college student might write. Lee Sternthal and Brian Klugman in fact wrote the script back in 1999 when they were both in their mid twenties. The two unknown writers shopped the script around but no one took any interest. Then, several years later their good friend Bradley Cooper, whom they met at a bar mitzvah in 1988, became a huge star with The Hangover (2009). With him interested in starring in his friends script, studios paid attention. As Brian Klugman, nephew of Jack, told The Los Angeles Times, "This is a movie that got made because of our friend. The sad truth is that without him, this movie doesn't get made."

I guess this means that Bradley Cooper is to blame for this pretentious dialogue that Patrick mentioned, making it to the big screen. Every actor gets to recite at least one line that no one would actually say in real life. Olivia Wilde, "I'm young, spoiled, impetuous and American. Humor me." Jeremy Irons, "We all make our choices in life, the hard thing to do is live with them." J.K. Simmons, "Another part of being a man, no matter how painful it might be, is accepting your own limitations." The worst of them all was given to Bradley Cooper when he says, "I'm not who I thought I was, okay? I'm not. And I'm terrified that I never will be."  These lines sound like they belong in some angst ridden folk song, sung in some pseudo artsy college bar.

If there is anything to take away from this film it is that it does not really matter who wrote what story. Other than the authors in question, who gains or loses anything by discovering the real author? If you like a story, will you no longer enjoy it if you discover someone else wrote it? Of course not. God knows finding out that someone else wrote this script would not, by no means, increase my enjoyment of it. If Sternthal and Klugman were smart though, they would claim they found a manuscript on a train and while high, convinced Cooper it was a story worth turning into a movie. Hey, if you can claim credit for a good story, why not blame someone else for a lousy one.