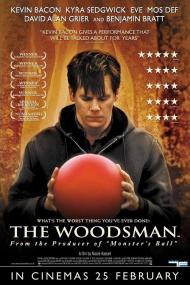 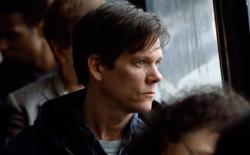 Kevin Bacon in The Woodsman.

The Woodsman has a lot in common with last year's Monster. Both movies feature great performances with actors playing fucked up people.

Bacon plays Walter, a man just released from prison after serving twelve years for molesting several young girls. He gets a job at a lumberyard, an apartment across the street from an elementary school, and even a girlfriend when he is seduced by a co-worker played by Bacon's real life wife, Kyra Sedgwick. He even attends therapy, although with hostility, expressing his longing to be “normal". Yet he still finds himself following young girls with his eyes and sometimes by foot, leaving open the question of will he or won't he do it again.

That we are able to feel any emotion but loathing for Walter is attributable to two things. Bacon's humanizing performance, and most importantly, none of Walter's victims are ever shown. Had one of the attacks that he committed before landing in prison been shown, any hope of keeping the audience would be lost. Instead they are only referred to briefly when Walter confesses his secret to his new girlfriend.

So with the combination of a clever script and an understated performance by Bacon we are unwittingly made to feel empathy with Walter. When Walter's co-workers discover his secret they react with understandable outrage and indignation and yet my first instinct was to side with Walter in the face of the attacking group.

Along with Bacon, the smaller roles are also well done, including a small but important role played by hip-hop singer Mos Def as the police detective assigned to keep tabs on Walter.

Where the first two-thirds draw you into the movie in a dark and gloomy way, the ending is too neat and happy and far brighter than the mood has led us to believe it would end. The climactic moment on the park bench, which is supposed to be the revelation moment, is just too coincidental to be effective. It's jarring and it breaks the momentum. It left me with a feeling of, ok damn it, you made me care about this character, and that's the best you can do for an ending?